The aging Indian Point nuclear power plant will close by 2021 under a deal between Entergy, the plant’s owner, and New York State, according to a report in The New York Times and U.S. Congressman Sean Patrick Maloney.

The pending agreement was disclosed Friday evening (Jan. 6) by the environmental group Hudson River Sloop Clearwater, Maloney and an online article in The New York Times that cited an anonymous source privy to the negotiations. However, neither Entergy nor the state had announced the closure by mid-afternoon Saturday (Jan. 7).

The Times source said Gov. Andrew Cuomo was expected to sign the agreement on Monday (Jan. 9). But a gubernatorial spokesman noted that “until it’s done it’s not done.”

Clearwater said in a statement it had received word of the closure Friday afternoon.

Cuomo has consistently called for the closing of Indian Point, which has two of its three reactors operating. Under the agreement brokered by the state, one reactor would close by April 2020 and the other by April 2021, according to the Times.

Concerns about the economic repercussions of the arrangement or of continued threats until the plant closes shaded reactions to the expected closure.

“This is definitely a step in the right direction, but it still leaves us in danger for three to four more years,” said Manna Jo Greene, Clearwater’s environmental action director, citing what she called the plant’s “abysmal history” of safety problems. Dave Conover, Clearwater’s interim executive director, also said “the intense water withdrawals used to cool the plant will continue to harm fish and other aquatic species” for four years.

Clearwater also urged that the shut-down plans “must protect workers.”

Maloney, a Democrat who represents Philipstown, Beacon and other Hudson Valley areas in Congress, shared that concern, cautioning that the closure must not be “placed on the backs of hardworking folks.” 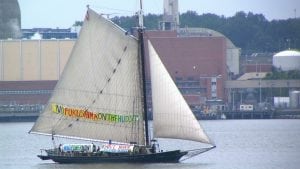 Hudson River Sloop Clearwater calls for the closure of Indian Point. (Photo courtesy of A. Jones and Clearwater)

“I greatly appreciate Gov. Cuomo and Entergy working together to wind down operations at Indian Point, especially after so many safety issues in recent years – from faulty baffle bolts to contaminated water leaks – have shown it is simply too dangerous to continue operating,” he said in a statement, adding that the agreement “must include concrete plans to protect the jobs of hundreds of New Yorkers and keep energy prices low for my neighbors.”

In November, Entergy suffered a major legal setback when the Court of Appeals, New York State’s highest judicial authority, ruled that Indian Point is not exempt from state environmental review and certifications crucial to the relicensing of the two reactors. Licenses for the reactors have expired, but they have continued to operate while Entergy seeks renewals.

Entergy claims on its website that “Indian Point produces about 25 percent of New York City and Westchester [County] electricity with virtually no greenhouse gas emissions, at price-stable costs.”

Clearwater disagrees, saying the state has determined “there is currently sufficient energy on the grid to do without Indian Point, due to energy efficiency and reduced energy consumption and the rapid increase in renewables resources.”

One thought on “Deal Reportedly Underway to Close Indian Point”