Plan to close nuclear plant a relief for many but raises concerns about employees, tax base

Government, corporate, and environmental officials on Jan. 9 confirmed that the aging Indian Point nuclear power plant will close by April 2021, when the second of its two working reactors is to cease operations.

The plant’s other reactor will shut down by April 2020 under a plan worked out by New York Gov. Andrew Cuomo; Entergy, which owns the plant; and Riverkeeper, representing environmental groups.

Under the agreement, operations could continue until 2025 for reasons of war or a sudden increase in electrical demand or decrease in electric energy, but the state would have to approve the extension and Riverkeeper and Scenic Hudson, another regional conservation group, could challenge the delay.

Indian Point critics saw the closure as a breakthrough for nature and public safety. Entergy portrayed it as an economic necessity.

Are You in the Danger Zone?

The 2016-17 edition of the Putnam County Indian Point Emergency Guide can be downloaded at putnamcountyny.com/pcbes.

Call the Putnam County Bureau of Emergency Services at 845-808-4000 to request free potassium iodide tablets that will block radioactive iodine from entering the thyroid gland in the event of a large release of radioactive material.

If you don’t have a car, you can catch a bus to evacuate at a number of stops along Route 9 and Route 9D, or in Cold Spring at Main Street and Kemble Avenue and other intersections. They are listed in the Emergency Guide.

If you have children at school in Cold Spring or Garrison, evacuation officials may relocate them to Kent Elementary School. The “reception center” for Philipstown residents is Brewster High School.

Riverkeeper President Paul Gallay a Cold Spring resident, said the agreement would eliminate what he called the “biggest existential threat in the region.” Critics have long cited nuclear accidents such as those at Three Mile Island (1979), Chernobyl (1986) and Fukushima (2011) as a reason to close Indian Point, which is located on the Hudson River near Peekskill in a far more densely populated area.

By one estimate nearly 20 million people live within 50 miles of the plant, an area that includes Beacon, and about 300,000 people live within 10 miles, which includes most of Philipstown. In this 10-mile “Emergency Planning Zone,” residents are supplied with evacuation guides and county health departments and schools typically maintain a supply of potassium iodide tablets to counteract radiation poisoning should a major leak occur at the plant.

Entergy has faced criticism from activists and elected officials after each report of faulty bolts on plates in nuclear fuel components, radioactive leaks, transformer explosions and other problems, and because of its river water consumption and its effect on wildlife. In March, an inspection of one reactor determined that at least 227 of 832 bolts were missing or weakened by radiation. Entergy acknowledged that the situation “significantly degrades plant safety.”

Nonetheless, Leo Denault, Entergy’s chief executive officer and chairperson, on Jan. 9 defended the company’s safety record, saying that since it acquired Indian Point 15 years ago “we have invested more than $1.3 billion in safety and reliability improvements” and “delivered hundreds of millions of megawatt hours of virtually emissions-free power to the Hudson Valley and New York City safely.”

In November, the New York Court of Appeals, the state’s highest judicial authority, ruled that Indian Point is not exempt from state environmental review and certification that is crucial to federal relicensing of the two reactors, which is pending. The licenses for both reactors have expired, but they continue to function during the renewal process.

Along with the shutdown schedule and emergency-delay provision, the agreement provides that:

As part of the shutdown, Entergy also said it will move its emergency operations center by mid-2018 to an office complex on Merritt Boulevard in Fishkill. In 2012, Entergy presented plans for a 20,000-square-foot center on Horsemen’s Trail Road, off Route 9 in Philipstown. Although the project got as far as a public hearing, it never came to fruition.

New York Attorney General Eric Schneiderman, working with Cuomo, led the state’s shut-down effort. He called the closure “a major victory for the health and safety of millions of New Yorkers” that “will help kick-start the state’s clean energy future.” He promised to “vigorously monitor Entergy’s compliance.”

Gallay of Riverkeeper said the agreement “provides what we’ve been fighting for, over decades” and is “a win for the safety of our communities, a win for the Hudson River and all the rich variety of life within it, and a win for a clean, sustainable energy future.” 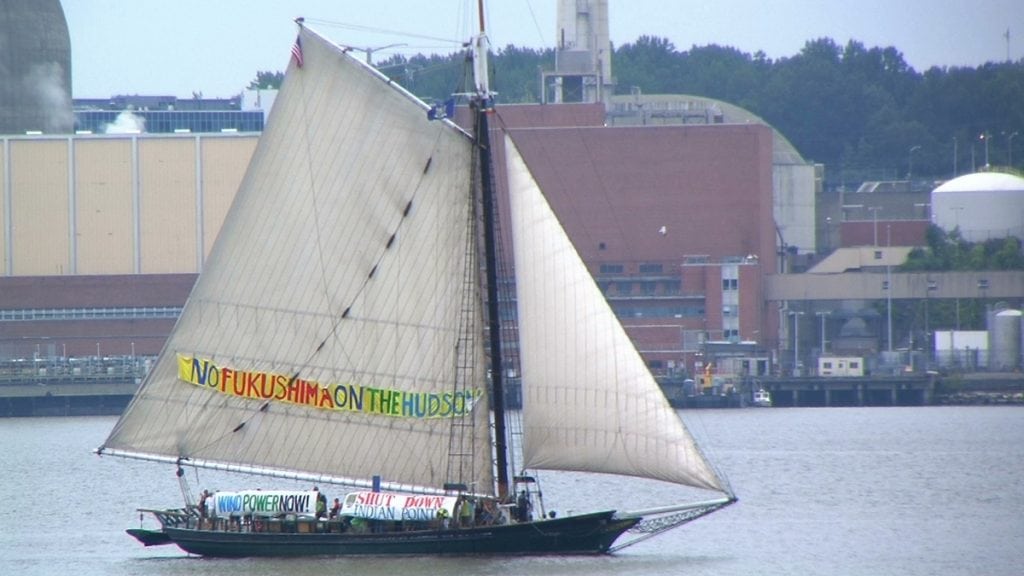 For decades, Hudson River Sloop Clearwater has called for the closure of Indian Point. (Photo courtesy of A. Jones and Clearwater)

He said the agreement’s stipulation that the closing could not be postponed, except in an emergency, was essential. “We wouldn’t have become a party to this agreement without such safeguards,” he said.

Scenic Hudson President Ned Sullivan hailed the agreement as “a landmark victory.” Clearwater’s environmental action director, Manna Jo Greene, said it is “definitely a step in the right direction” although “it still leaves us in danger for three to four more years.”

Entergy said its decision to close the plant reflected financial realities, including, according to Bill Mohl, president of Entergy Wholesale Commodities, consistently low energy prices that have reduced revenues and increased operating costs. He noted that record-low gas prices due primarily to supply from the Marcellus Shale formation have driven down power prices by about 45 percent since 2006.

Like others, Schneiderman and Cuomo have expressed concerns about the effect of a major Indian Point radiation leak on New York City, about 40 miles to the south. But the city is not alone in that: a 2011 analysis by MSNBC found that among the 100 most populous U.S. cities, 26 have nuclear plants within 50 miles, including Philadelphia, which has three. The network calculated that about 4 million Americans live within 10 miles of a nuclear plant.

MSNBC also estimated, using Nuclear Regulatory Commission data, that Reactor No. 3 at Indian Point has the highest risk of earthquake damage of any reactor in the country, based on the chance of a quake and its design strength. It noted that the estimate of 1 in 10,000 annually was nearly enough to require “immediate concern regarding adequate protection” of the public under NRC guidelines. (Reactor No. 2 had a 1 in 30,303 chance of earthquake damage annually, which put it outside the top 10.)

Environmentalists and elected officials tempered their satisfaction with the closure with concern about the effect on plant personnel, consumers and the tax base.

Clearwater said closure plans “must protect workers.” Rep. Sean Patrick Maloney, whose U.S. House district includes Philipstown, Beacon, and other mid-Hudson areas, cautioned that the costs of the closure must not be “placed on the backs of hardworking folks.” At a multi-issue forum at the Desmond-Fish Library in Garrison on Jan. 8, Maloney recommended the shutdown be handled in such a way as to “care about the economy of Buchanan [where the plant is located] and actually repurpose that part of the energy grid.” 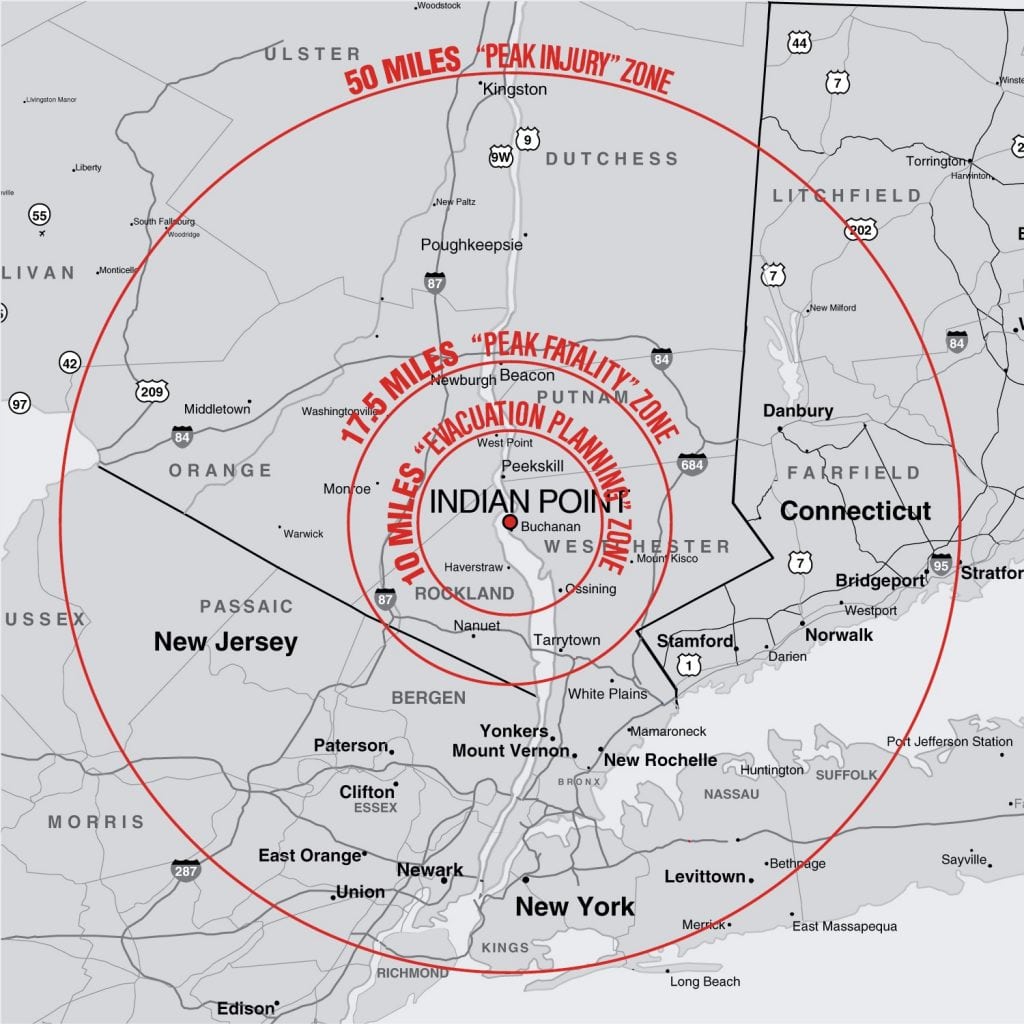 The three ”zones” around Indian Point. If a major leak occurred, much would depend on which way the wind was blowing. (NYPIRG)

Sandy Galef, who represents Philipstown and parts of Westchester County in the state Assembly, said at the same forum that she is “concerned about all the wonderful jobs” lost in a shutdown, about the tax base, and about the Hendrick Hudson school district, which relies for Entergy for about a third of its revenue.

She also recalled a visit to a decommissioned Connecticut nuclear plant where the level of security left her uneasy. “A lot of work will have to be done” in the shutdown and its aftermath, she said. She, too, raised the possibility of using at least part of the site for a non-nuclear energy facility.

Denault, the Entergy CEO, said the corporation is “committed to treating our employees fairly and will help those interested in other opportunities to relocate within the Entergy system.” However, Entergy has closed or said it plans to close or sell nuclear plants in upstate New York on Lake Ontario, Vermont, Massachusetts and Michigan as it shifts its emphasis to nuclear operations in the South.

The Nuclear Energy Institute, an industry group, in June 2015 estimated that Indian Point provides 25 percent of the electricity used in Westchester County and New York City and prevents the release of 8.5 million metric tons of carbon dioxide annually, about the same as released by 1.6 million cars. (The Highlands does not get power from the plant.) It calculated that the plant provides $1.32 billion in economic output to five local counties, including Putnam and Dutchess. Entergy says Indian Point has a $140 million payroll, pays about $30 million in taxes and donates $1 million to charity each year.

The institute report claimed the cost to the regional economy from a plant closure could be as high as $2.3 billion, with 5,300 jobs lost, including 1,000 people employed at the plant and 2,800 in surrounding counties. “Losses would reverberate for decades after the plant is shut down,” it warned, “and host communities may never fully recover.”

Cuomo promised the state would replace the 2,000 megawatts produced by Indian Point’s two reactors annually with other sources such as hydroelectricity, wind and solar. He said that the closure “will have little or no effect on New Yorkers’ electricity bills.”

One thought on “Life Without Indian Point”