Learning that photographer Rafael Quirindongo studied astrophysics, computer technology and architecture makes perfect sense when viewing his work, on display through Feb. 6 at RiverWinds Gallery in Beacon. It is full of dimension and wonder, science and structure.

The nine photographs examine iconic New York City facades and construction: micro and macro views of Grand Central Station, city bridges, the 9/11 Memorial and the skyline itself. Quirindongo said he focused his camera on “emerging architectural landscape, offering a unique perspective on its geometric patterns.” 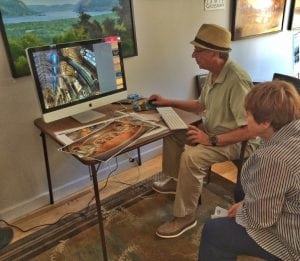 Sadly, Quirindongo died in December at age 61 after a recurrence of cancer. His work appeared frequently in group shows at RiverWinds, and he did a solo show there in 2015. “He evolved rapidly, and we encouraged him — he was a constant in the gallery,” says RiverWinds co-owner Mary Ann Glass.

Born in the city he photographed so frequently, Quirindongo studied astrophysics at Columbia and had a long career in information technology. Gradually he was able to combine his day job with his affinity for photography; for instance, while building an IT system for a construction company, he photographed their buildings in progress, sometimes climbing up the scaffolding. 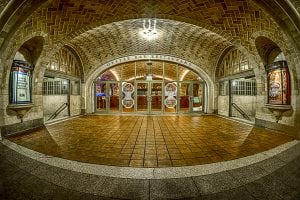 In thumbing through Quirindongo’s prints at the RiverWinds show, you can see the intersection of architecture and the photographer’s eye for contrast. One photograph stands out; it places the geometry of a courtyard at Lincoln Center at the background against the distinctive shapes of a pair of garbage cans. Toward the end of his life, Quirindongo had been doing more editorial work. His photographs of the Kips Bay Decorator Show House were published in 2015 in Architectural Digest, Forbes and the Washington Post.

One of his techniques was known as “high-dynamic range imaging,” in which he took multiple photos at different exposures and combined them  into one image. This produced a greater depth of field and range of luminosity. One photo on display, of Liberty Park, utilizes 12 such “slices.” The images are printed on aluminum, which helps to “highlight his palette — he was after a range of tones and very sharp detail,” Glass explains. She adds that Quirindongo also sometimes used fish-eye lenses. “I’d like to say I don’t photograph things, but rather how they make me feel,” he wrote for an earlier exhibit. “In the end it’s an expression of how I see the world, and perhaps, a very good way to get to know me.”

Glass describes Quirindongo, who lived in Putnam Valley, as “a gentleman — kind, witty, intelligent, a softly charismatic guy who drew people to him, though he was never a self-promoter.” His photographs will be maintained by his widow, Dona Von Raalte (rqgallery.com).

Along with the new exhibit, RiverWinds, a stalwart of Beacon’s West End (it has been open for 13 years) is showing off its revamped interior. Founded by Glass and four other artists, the gallery has featured works in a variety of media, including paintings, prints and photography, ceramics, jewelry, postcards and even objects made from wool.

Last year, two co-owners, Virginia Donovan and Linda Hubbard, decided to relocate to Maryland and Connecticut, respectively, and spend more time with their families, particularly their grandchildren. Galina Krasskova came on board as an owner in 2014 and last year Kathy and Karl LaLonde bought in. Kathy, a jewelry designer, has put her  decades of retail experience to work at the gallery, “lightening up the space, re-ordering the store, making it more open, giving customers room to see the work more easily,” says Glass. 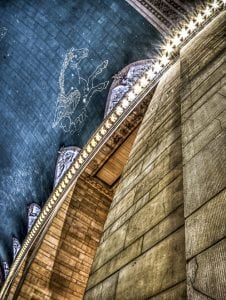 Because RiverWinds is a consignment gallery, “we jury [the art] amongst ourselves, and we’re eclectic,” Glass explains, noting that among paintings alone, the work ranges from expressionistic to realistic landscapes. Functional ceramics are popular with customers, she says, many of whom find RiverWinds after visiting Dia:Beacon. “Dia is a huge anchor to the arts scene; it gives people a major reason to come up here,” Glass notes.

RiverWinds, located at 172 Main St., is open Wednesday through Monday from noon to 6 p.m. and on Second Saturdays until 9 p.m. See riverwindsgallery.com.