General ready to receive the “oppressed & persecuted of all nations & religions”

On Dec. 2, 1783, a few weeks before the signing of the Treaty of Paris that ended the Revolutionary War, an Irishman newly arrived to New York City wrote to Gen. George Washington. Most Irish were no fans of the British, having waged their own war of independence from its rule. 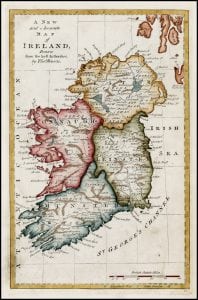 We the Members of the Volunteer Associations and other inhabitants of the Kingdom of Ireland lately arrived in this city, unable to resist the temptation of doing ourselves so great an honor, beg leave to present your Excellency with our unfeigned and warmest congratulations on the glorious termination of the late cruel, unnatural and oppressive war in which you have so happily succeeded.

We view with admiration what the efforts of a brave, determined and virtuous people, under so great a commander is capable of producing… We would have been happy could we have been soldiers under your command, we have taken the first opportunity to offer ourselves as citizens and pray a participation of those blessings you have so dearly won and effectually established.

We trust great, sir, that fame has not injured our country in your Excellency’s estimation; its natural hospitality was not withheld from such of our American brethren as the chance of war sent amongst us [as prisoners of war]. We were happy in rendering them liberty and every comfort & convenience, but in this we barely did our duty….

The testimony of your satisfaction at the glorious termination of the late contest, and your indulgent opinion of my agency in it, afford me singular pleasure & merit my warmest acknowledgments.

A 1783 painting of George Washington by William Dunlap

If the example of the Americans successfully contending in the cause of freedom can be of any use to other nations, we shall have an additional motive for rejoicing at so prosperous an event.

It was not an uninteresting consideration, to learn, that the Kingdom of Ireland, by bold & manly conduct, had obtained redress of many of its grievances, and it is much to be wished, that the blessings of equal liberty & unrestrained commerce may yet prevail more extensively. In the meantime, you may be assured, gentlemen, that the hospitality & beneficence of your countrymen to our brethren who have been prisoners of war are neither unknown or unregarded.

The bosom of America is open to receive not only the opulent & respectable stranger but the oppressed & persecuted of all nations & religions; whom we shall welcome to a participation of all our rights & privileges, if by decency & propriety of conduct they appear to merit the enjoyment.

(From The Papers of George Washington, Library of Congress. Thanks to Chris Cring for noting the letters at founders.archives.gov.)