The Philipstown Planning Board continued its review of a plan by the Manitou School on Route 9D to expand, while various local government panels continued their scrutiny of the two other proposals — the Hudson Highlands Reserve housing complex and cell phone tower near the intersection of Routes 9 and 301.

What’s happened: Based in a house once owned by Robert Parrott, the superintendent of the West Point Foundry, the private Manitou School wants to add space to serve its growing enrollment.

The pre- and elementary school, which occupies 5¼ acres at the intersection of Route 9D and Peekskill Road at the edge of Cold Spring and Nelsonville, plans a 760-square-foot annex to the historic house, a 2,600-square-foot gym, and extra parking. 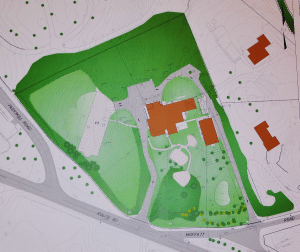 An amended site plan, presented to the Philipstown Planning Board on Aug. 17, shows the proposed Manitou School expansion. (Photo by L.S. Armstrong)

What’s next: Initially Manitou proposed a larger annex that would contain four classrooms and the gym. But after pushback from Planning Board members and neighbors about the scope of the project, the school changed its drawings.

Although generally receptive to the revised plans, some Planning Board members at their Aug. 17 meeting questioned the wisdom of creating more impervious-surface parking. Chairman Anthony Merante noted that the board prefers to limit impervious surfaces, which do not absorb rain or melting snow and can create run-off and storm water management problems.

“We can certainly look at that,” replied Glennon Watson, of Badey & Watson Surveying & Engineering, who is working with Manitou on the project.

What’s happened: The Planning Board in July and August continued to review plans for the Hudson Highlands Reserve, an upscale, equestrian-oriented housing development proposed for North Highlands. It would be constructed on a 206-acre parcel bounded by Route 9, Horton Road, East Mountain Road North, and East Mountain. The project first came to the board in 2014. 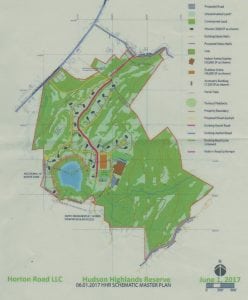 A map of the proposed Hudson Highlands Reserve

The Hudson Highlands Reserve plans call for homes spread around a pond on 1-acre lots, not clustered. The homes, each 3,000- to 4,000-square-feet, would sell for $1 million to $3 million. Conservation subdivisions can receive certain zoning breaks not available to sprawling conventional subdivisions.

Along with the issue of whether the complex is a conservation subdivision, other questions raised by members of the board and public involve the number of houses (figures have ranged from 22 to 29); a possible rezoning of a section of the property once intended for soil mining operations; whether the project’s open space is too fragmented for conservation purposes; and whether horseback-riding trails would adversely affect steep slopes or wetlands.

What’s next: With the board’s ongoing feedback, the developer has prepared a detailed Environmental Assessment Form (EAF). Glennon Watson, representing the developers, said on Aug. 17 that they hope to complete the third major part of the EAF in time to present it to the Planning Board in September or October. The Philipstown Conservation Board also has been looking at the plans.

What’s happened: Homeland Towers LLC, working with Verizon, proposed a cell phone tower for a hillside off Vineyard Road, which intersects with Route 9 slightly south of Route 301. After neighbors and other residents objected, a proposal to put the tower in the town’s old landfill, first floated in 2014, was revived.

What’s next: The Philipstown Zoning Board of Appeals and Conservation Board continued their reviews of plans for the Vineyard Road cell tower, while Vincent Xavier of Homeland Towers said the firm would again evaluate the landfill site. The Zoning Board did not meet in August.