Germinating is taken literally and figuratively in a nature-themed, four-woman exhibit, Cross Pollination, which opens on Second Saturday, Sept. 9, at the Catalyst Gallery in Beacon.

The women are sculptor Cindy Booth (Peekskill), photographers Cali Gorevic (Garrison) and Jane Soodalter (Cold Spring) and collage artist Anita Jacobson (Garrison). They have known each other for years and “offered each other new seeds of stimulation and insight,” according to Gorevic, explaining the theme and title of the show. 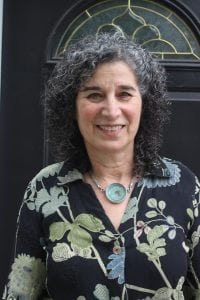 Anita Jacobson (Photo by A. Rooney)

Though Jacobson is trained in historic preservation — she graduated from NYU, attended The Cooperstown Graduate Program in Museum Studies and co-founded New York City’s Tenement Museum — she has always been interested in nature and the environment. Today she divides her time between the city and Garrison, where she has lived since 1978, following in the footsteps of her brother, an architect, who wound up designing her home.

When in Garrison, she’s often found in the woods. “They make me feel connected to the world,” she says. “I can’t believe the construction of flowers. The shapes in nature are miraculous.” 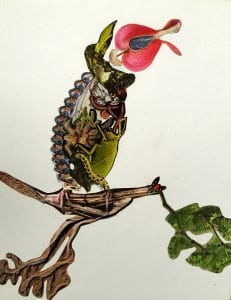 Jacobson’s collages depict nature’s beauty and ravages, and she is particularly interested in birds and insects. “My creatures have an industrial part to them, which combines with who they are,” she explains. “They’re sometimes whimsical, but they always have a message. It’s about man as the invasive species…. We are all connected, in an intricate, delicate balance, for better or worse. The web of life both nurtures and destroys.”

The Museum of Immigrants

Before devoting much of her time to art, Anita Jacobson dedicated her energy to the Lower East Side Tenement Museum. “I was looking for something to do once my kids were grown,” she recalls. “I began volunteering for the restoration of the Eldridge Street Synagogue, and there I met Ruth Abrams, who had grown up in the South and was deeply interested in civil rights and tolerance.”

Abrams proposed a museum. “One day I was walking down Orchard Street and I saw a sign on a window. I got in touch with the owner, walked in and was bowled over — it was unchanged since it was shuttered in 1935. It was as if the building found me.” 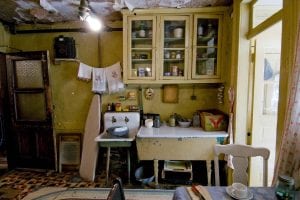 A kitchen inside the Tenement Museum (Photo by Keiko Niwa)

They rented the building, built in 1863, and eventually purchased it. “It was Ruth’s idea to create three or four apartments and interpret them as they were,” Jacobson explains. Each apartment is devoted to a different immigrant group of the period. “We’ve become a part of the National Parks Service and had 250,000 visitors last year,” Jacobson notes. Last year the museum added a second building whose exhibits will focus on immigrants who arrived after 1935: Holocaust survivors, Chinese, Puerto Rican. “It’s going to be a wonderful continuation of the story,” she says.

During the early days of the museum, Jacobson says, many historians had not focused on the social history of the period. Today, with immigration as a touchpoint, “docents are trained to deal with issues that come up, because a lot of people think they can express themselves in an intolerant way.”

She works with a variety of materials — paper, tissue paper, shells, sea glass, bark and fungus — among them, to build her pieces. “I like collage, because you can make mistakes and then rip it to shreds, from which it evolves into something else,” she says. “It surprises me all the time.” 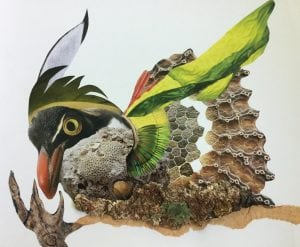 Bird with Cape, a collage by Anita Jacobson

Jacobson began exhibiting her art seven years ago, after being invited to talk at a program serving underprivileged youth. That spurred her to connect with fellow artists in the Hudson Valley, including as part of the Gallery 66 collective in Cold Spring. Most recently her work has been shown in a group exhibit, The Grass Menagerie, at the Reeves-Reed Arboretum in Summit, New Jersey.

Catalyst Gallery, located at 137 Main St., in Beacon, is open Friday through Sunday from noon to 6 p.m., or by appointment. On Second Saturday, the gallery will be open until 8 p.m. See anitajacobsonartist.com or catalystgallery.com. Cross Pollination continues through Oct. 1.

The other three artists in Cross Pollination are also working off the broad them of nature:

Cindy Booth utilizes materials from clay and copper to epoxies and found objects to create sculptures. “Generating and creating art is for me about letting go of control and allowing the materials to take me in unexpected directions,” she says. 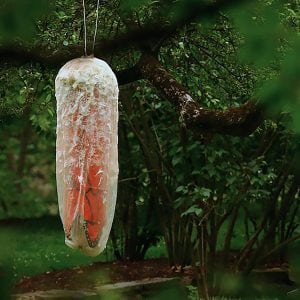 Cali Gorevic is exhibiting black-and-white photographs of leaves. “For 25 years trees have been my primary focus,” she says. “Only recently did I feel the impetus to narrow my focus and explore the singular, sensual beauty of each leaf, which are as different from each other as snowflakes.” 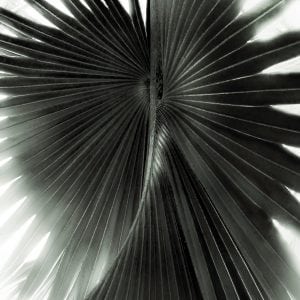 Jane Soodalter is a macro photographer who seeks the hidden beauty in everyday objects. “For this series I safaried through woods, fields, gardens, arboretums, roadsides and city streets to capture the grace and allure concealed in the foliage of plants and trees.” 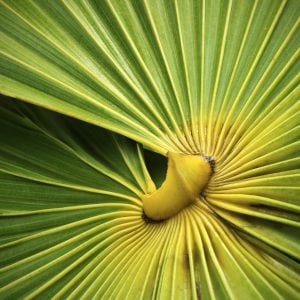 Wheel of Life, by Jane Soodalter