Consolidation with sheriff could save $582K

The Wappingers Falls Village Board of Trustees voted 5 to 1 on Aug. 30 to disband its police department and enter into a shared-services plan with the Dutchess County Sheriff’s Office.

The move is part of a larger initiative, ordered by the state of New York, compelling counties to consolidate services. County executives have a Sept. 15 deadline to submit their plans.

The Dutchess County plan outlines 37 projects, including the Wappingers Falls-Sheriff’s Office deal, that it projects would save taxpayers an estimated $15 million in 2018 and $12.5 million annually thereafter, saving each homeowner about $118 annually in property taxes. 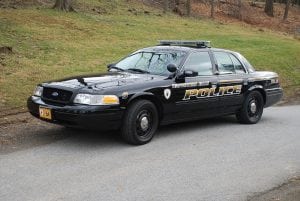 The Wappingers Falls Police Department could be disbanded in January unless opponents can get the measure on the November ballot. (Photo provided)

Disbanding the Wappingers Falls department and creating a smaller force of full-time officers is expected to save the village $582,000 annually, with the police budget dropping from $1.49 million to $906,000. The move would take place in January, although opponents have until Sept. 29 to gather enough signatures from registered voters in the village to put the issue on the November ballot.

To encourage counties to consolidate services, the state has promised to match, with grants, any savings achieved through consolidation. In the case of Wappingers Falls, for example, Dutchess County could receive a matching grant of $582,000.

Dutchess County has proposed 37 projects to consolidate services. This list includes those that would involve Beacon, and the projected total savings in 2018 for the county and municipalities involved.

Wappingers Falls has 27 part-time and one full-time officer, as well as dispatchers and a part-time commissioner. As part of the shared-services agreement, the sheriff’s office would provide two fulltime patrol officers from 8 a.m. to midnight and one officer from midnight to 8 a.m. It also would relocate its Zone 4 office from the Hudson Valley Regional Airport to the village.

As the Aug. 30 board meeting ended, an officer yelled: “Thanks for laying us off!” Members of the Wappingers Falls force have established a website to gather support to save the department, arguing the board wants to hand control to “outsiders.”

If the plan takes effect, Wappinger Falls would join a list of 12 towns and three villages that have contracted with the Dutchess County Sheriff’s Office to provide police services, including Pawling, Rhinebeck and Wappinger.

Hudson Valley Pattern for Progress, based in Newburgh, recently completed a study for Dutchess County that evaluated whether Beacon and the village and town of Fishkill could consolidate their police departments. A plan to consolidate Beacon’s three firehouses is included among the 37 projects proposed by the county, with a projected annual savings of $135,000 beginning in 2019.