On Saturday, Nov. 4, I had the honor of being a guardian on Hudson Valley Honor Flight No. 18, taking 86 World War II, Korea and Vietnam veterans to Washington, D.C. There we visited the World War II and Korean War memorials and watched the Changing of the Guard at Arlington Cemetery.

I would like to thank the many students at the Garrison School for the letters they wrote to these veterans under the direction of guidance counselor Mike Williams. On the flight home there was a surprise Mail Call and each veteran was given a large envelope containing letters written by various groups, including the Garrison students. 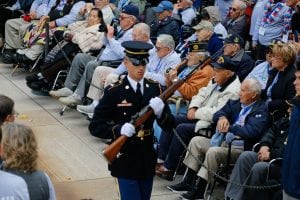 The veterans of Hudson Valley Honor Flight No. 18 watched the Changing of the Guard at Arlington National Cemetery on Nov. 4. (Photo by EC Media Group)

I can attest to the emotions of the veterans as they received these packets. Many had tears running down their faces as they read all of the sincere words honoring their service to our country. Most said that they wanted to reread all the letters the next day and share them with their families and friends.

There were hundreds of people at the airports in Newburgh and Washington, D.C., to cheer their departure and arrival. I was so pleased to see a Garrison student at Stewart Airport at 7 a.m. among the throngs — Ian Matkin looked so happy and proud as he shook the hands of these heroes. Bravo, Ian!

There are many reasons to be proud of Garrison students. Please add this to the list.