Around 7:15 p.m. on Nov. 27, Beacon firefighters responded to a two-alarm house fire on North Elm Street.

On the scene within minutes, three firefighters soon had the blaze, which started outside and then entered the home, under control. Both occupants and their dog escaped without injury.

With three of the city’s 13 full-time, or career, firefighters at the site until after 11 p.m., five off-duty career firefighters and volunteers from Rombout and Glenham manned Beacon’s three stations in case of emergencies. 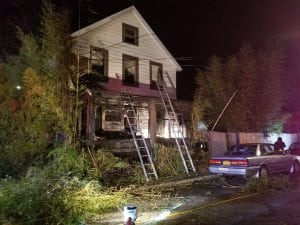 “At the beginning of every fire in Beacon, we’re shorthanded,” Van Voorhis said, “and the beginning is the most crucial time with a fire. It’s when you need your manpower.”

That evening, one full-time firefighter entered the house alone with a hose line. A volunteer had accompanied the three career officers to the site, but he was not certified for interior firefighting.

A second volunteer who was certified arrived moments later. But even that short time alone was critical, Van Voorhis said. 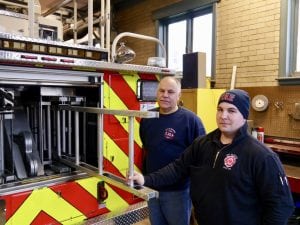 “We can pump all the water we want from the outside, but you have to get inside to make a rescue, to check for an extension of the fire and to extinguish the fire,” he said. “What if he went in and the floor collapsed or the condition of the fire got worse? It’s an unsafe practice for one person to go into a fire.”

The predicament isn’t exclusive to Beacon. In Philipstown, the Cold Spring, North Highlands, Continental Village and Garrison fire companies are manned by volunteers, and all have reported the same challenges recruiting members.

Along with Beacon, each is listed at a website, RecruitNY.org, and participates in a recruitment weekend in April, both projects of the Firemen’s Association of the State of New York. In September, the FASNY received a $1.5 million federal grant to recruit members for the state’s 1,800 volunteer departments.

During the recruiting weekend last April, Chief Steve Smith of the Cold Spring company, who has been a firefighter for 25 years, noted that one common misconception about volunteering is that there is an age limit.

What Would It Cost?

A 2015 study commissioned by the Firemen’s Association of the State of New York, which represents volunteers, estimated the cost of converting volunteer companies to paid departments in salaries, equipment and retrofitting stations with sleeping and dining facilities. Its consultants concluded Putnam would need an additional $129 million annually, the equivalent of a 56 percent increase in county taxes, and Dutchess would need $335 million, or a tax increase of 45 percent.

“Our youngest volunteer is 16 and our oldest is 80,” he said, adding that a 50-year-old man asked about becoming an associate member but thought he would be too old. But not every member is a firefighter and other roles such as assisting with traffic during calls must also be filled, he said.

According to the National Fire Protection Association, 70 percent of the nation’s 1.2 million firefighters are volunteers, and 95 percent of those volunteers are in districts that protect fewer than 25,000 people.

But the number of volunteer firefighters in the U.S. reached a 30-year low in 2011, the National Volunteer Fire Council says. There has been slow growth since then, but it hasn’t been enough to meet the increasing volume of calls, which have tripled due in large part to an increase in emergency medical calls. In Beacon, there’s also the added factor of 1,000-plus new housing units planned or under construction.

The reasons for the shortage run the gamut from training requirements to facial hair, Van Voorhis says.

In New York state, volunteers must complete more than 130 hours of training to be certified for interior firefighting. When Van Voorhis began volunteering in Fishkill in 1971, the course load was 36 hours. 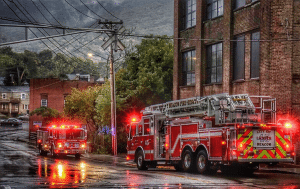 Two Beacon firetrucks on a call (Photo by Scott Harrison)

Volunteers must be clean-shaven (although moustaches are allowed) because the Occupational Safety and Health Administration says that facial hair breaks the airtight seal between the firefighter’s skin and an oxygen mask.

“Forty years ago, that stuff was overlooked,” Van Voorhis said. These days, not only are the requirements stricter, but the career path has changed, as well. Volunteers typically want to become paid firefighters, and they’re more likely today to relocate for a job than to wait for one in Beacon.

Beacon’s career firefighters work in 24-hour shifts — one day on, three days off. One firefighter mans each of Beacon’s three stations at all times and a corps of around two dozen volunteers — including junior firefighters and fire police — help on emergency calls when they can.

Years ago each fire company (Beacon’s three stations are all individually incorporated) had twice as many volunteers, often with waiting lists. Many times, several generations of a family would serve.

“Everyone is working a lot more than they used to,” said R.J. Trappe, who became a career firefighter in Beacon in 2014, at age 21. “When we had hundreds of volunteers, everyone worked in Beacon and the system worked well. Now people are commuting to the city and they just don’t have time.” 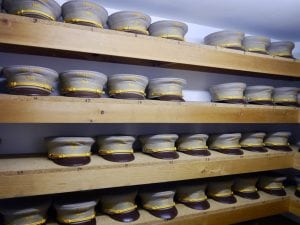 A closet holds marching caps, unused for 20 years or more, once worn by Beacon firefighters in parades. (Photo by J. Simms)

David Schlussman of Beacon is balancing a full-time job with the training required to become an interior-certified volunteer. He attends night courses two to three times per week.

“I signed up as a volunteer in high school but then moved,” he said. “When I came back to Beacon, it was an impulse that it would be a good thing to do, but I didn’t realize the commitment when I signed up again.”

At 33, Schlussman is a rarity. “No one gets 25- to 35-year-old volunteers anymore,” said Van Voorhis. “They’re either newlyweds or they have young kids at that age, and that makes it a lot harder.”

The majority of the city’s career firefighters are either single or do not have children, he said.

So far this year, the Beacon Fire Department has responded to more than 1,000 emergency calls (all career firefighters in the city are also certified EMTs), and about 500 fire-related calls. But what can be done to create more volunteers?

Van Voorhis says a key strategy is to cultivate an interest in young people. The department has made nearly two dozen fire safety presentations this year at city schools, day cares, summer community programs and at parks. The Beacon and Cold Spring departments also run summer academies for students, some of whom later join the company as volunteers.

Still, it hasn’t been enough. Sitting alone in the three-story Beacon Engine station on a Saturday afternoon, Ron Arrigo, 48, a career firefighter since 2015, recalled that “we couldn’t wait to get into the fire service when I was 16. But times have changed.”

One thought on “Wanted: Firefighters”