Sculptor Ed Benavente created the Beacon Bicycle Tree in 2011 and the Bicycle Menorah in 2014. 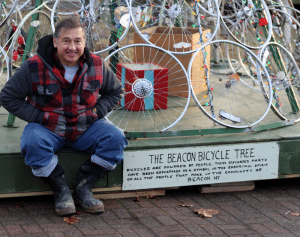 What inspired the tree and menorah?
Artists have a particular knack for making something out of nothing. Since there was no budget for a big public Christmas tree, I was able to use what I already had to make the first rendition. It was meager at best but we encouraged people to make their own ornaments out of recycled materials. Once the tree was established, it was a no-brainer to include a menorah.

Where did you get the bike parts?
The majority came from Peoples Bicycle on Main Street.

Where did you get the idea to use bicycles?
A bicycle is a machine powered by people, just like a community. Beacon has struggled through tough times. But ultimately it was the people who made an effort to bring new life and prosperity to the area.

Why did you become a sculptor?
I have always enjoyed physical work. Sculpture requires a certain amount of physical abuse that lets you know you are alive. Creating a work that can exist out-of-doors is particularly gratifying because it can coexist with the natural world and be “discovered” by the public.

Where do the tree and menorah go during the off season?
Santa’s helpers relocate everything to an undisclosed bicycle shop at the North Pole.