An investigation by Constable Travis revealed that the roofing materials stolen from Lewis Barley at Breakneck had been taken by wagon to Cold Spring and were being used atop a small building on Garden Street. The owner of the wagon pleaded an error over ownership of the material.

A noisy party that filled three wagons going up the hill on a Friday night were seen going down the hill Saturday morning and, when asked what was going on, they replied, “A good time.” It seems they had been at the residence of Mr. H. Dykeman, in the Highlands.

The Matteawan Quartette sang but the receipts were not enough to pay for the room because it was also pay night at the Foundry and there was a meeting of the Sons of Temperance at the same time.

George Clooney was taken to the county jail in default of his bail on the charge of assault by his family, who had “borne with his tyrannical manner under forbearance [that] has ceased to be a virtue.” 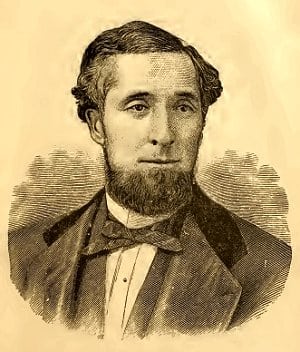 Philip Phillips, author of the bestselling Sabbath School Music Books, Singing Pilgrim and Musical Leaves, will perform at the South Highlands M.E. Church near Garrison’s, in a benefit for the church school.

A resident asked: “What shall we do to keep the children from coasting with their sleighs upon the sidewalk? The practice is clearly forbidden by our village laws … and yet year after year this goes by, and we are threatened with personal injury every time that we walk out.”

A tablet was dedicated with 23 stars inside St. Mary’s Episcopal Church to honor the members of the parish who are serving in the Armed Forces.

FBI Special Agent R.R. Granville spoke to the Cold Spring Lions Club at the Hudson View Hotel about the history of the agency and its work on espionage and sabotage cases. He asked for the co-operation of the Lions in aiding the FBI but cautioned not to be too hasty in sending in unverified accusations.

Police Chief Andrew Reilley wrote an article for The Shadow magazine called “Village Without Crime” about his experiences over 25 years policing his hometown of Cold Spring.

Trustee William Dardess Jr. was appointed mayor of Cold Spring following the resignation of Robert Mooney, who was hired for a government project in the Bahamas. Dardess was office manager at the Hudson River Stone Corp. quarry.

A wash painting by Charles Locke of Garrison called Harbor Traffic was included in the 1942-43 exhibition of contemporary art at the Whitney Museum of American Art in New York City. [The painting was purchased by the Whitney, one of 18 works by Locke in its collection. He died in 1983.] 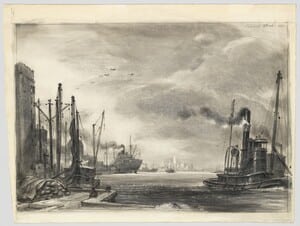 The Putnam County Libraries Association was formed during a meeting held at the Butterfield Library in Cold Spring.

Mary Beckwith, in a letter to the editor, warned that if Garrison school boys “continue breaking the neighbors’ windows, as they have mine, twice, they will get into jail, and not have the respect or trust of even their best friends.”

Authorities warned of a scam in which residents in Cold Spring and Beacon received a card in the mail saying the person had won a free wig and needed to either pick it up in Philadelphia or send $2.35 for postage and handling plus a “styling” fee. A Beacon woman reported she sent $12.95 and received a “ratty looking wig of many colors” which she gave to her children to use at Halloween.

The Haldane boys’ basketball team won their second game of the season, over Oakwood, 59-40. John Zuvic had 14 points and Coach John Rath said Tom Impellittiere played a good game. The Blue Devils won their first game over St. Peter’s of Peekskill, 64-40. Zuvic had 15 points and 19 rebounds.

More than 60 people turned out to hear Chief Curico of the Bureau of Criminal Investigation discuss narcotics abuse. He warned that smoking marijuana would lead a user to heroin, and that fewer than 1 percent of heroin addicts are ever cured.

The Cold Spring Lions served more than 4,000 pancakes, 800 sausage links and 900 cups of coffee at their Aunt Jemima Pancake Jamboree at the Haldane cafeteria.

On the afternoon of New Year’s Eve, Jean Saunders officiated at the cutting of a 6-pound English fruitcake at the Putnam County Historical Society.

The Brazilian soccer star Pele wrote a letter of encouragement to Dawn Kavana, a senior at Haldane who was the first girl to ever score a goal in boys’ soccer in the Bi-Valley League. Kavana had been seriously injured in an auto crash on Route 301.

Three 15-year-old Garrison boys were charged with 12 counts each of criminal mischief after they were accused of destroying mailboxes along Old Albany Post Road during a 2 a.m. run. A witness wrote down their license-plate number.

A gilt and painted wood carving of a spread-winged eagle sold for $19,500 at a Hudson Riverkeeper benefit auction.

The state education commissioner announced he was recommending a study be made of combining the Garrison school district with Putnam Valley. Garrison was one of 139 districts he suggested be studied for consolidation, including all districts that did not have grades K-12.

At a board meeting, Cold Spring Trustee Seth Gallagher said of high school students: “We need to find ways for them to hang out in a non-destructive way.” Mayor Anthony Phillips responded: “We’ve been discussing this since I was a teenager hanging out in 1950. The difference is now it’s destructive; we’ve lost 200 light bulbs off the bandstand. That’s why the police disperse them – not because they are teenagers.”

The board also discussed building a firehouse on land offered by developer Paul Guillaro at the old Butterfield Hospital site, where he plans to construct an assisted-living facility and condos for seniors. But the mayor said a firehouse on the parcel would be a “tight fit.”