Steve Blamires, a native of Scotland who lives in Beacon, is a shipboard historian and expedition leader for National Geographic and Lindblad Expeditions. Beginning Jan. 17, at 7:30 p.m., and continuing every other Wednesday through Feb. 28, he will present a series of talks at Beahive Beacon about Scottish culture and his journeys to Antarctica, West Africa and South America. 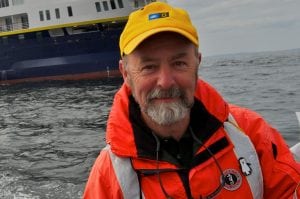 Given the current political climate, is the Antarctic Treaty in any jeopardy of being dissolved?

Antarctica has never been owned or claimed by any state or nation. In 1961 the United Nations set up the treaty to keep it that way and open it to all nations for scientific research. This means that any research carried out there  — climatology, meteorology, geology, etc. — can remain free from political or corporate intervention. It is not presently in jeopardy of being dissolved because mineral extraction there would be cost-prohibitive, but one day that may not be the case.

Did Scotland actually once suffer an “ethnic cleansing”?

The Gaelic-speaking Highlanders were a thorn in the side of the British royalty and government. Following an unsuccessful uprising in 1745, the British army spent two years searching out “suspect” Highlanders and killing entire families without trial.

Legislation banning all signs and symbols of Highland culture  — wearing the kilt, tartan, playing bagpipes, gathering in groups, carrying weapons  — was used as a reason to send in troops to the glens. This genocide was carried on right into the early 20th century by surrogate clan chieftains who forcibly evicted and deported thousands of families to make way for more profitable and less troublesome sheep.

Who was Roald Amundsen?

He achieved many firsts. From 1897 to 1899, he led the first expedition to over-winter in Antarctica. In 1903 he was the first to navigate the fabled Northwest Passage, which took three years. In 1911 he was the first to reach the South Pole, beating Capt. Robert Falcon Scott by 33 days. In 1925, his aircraft crashed on the ice near the North Pole, so he spent three weeks shoveling 600 tons of ice to make a runway, surviving on one pound of food daily. In 1926 he made the first flight over the North Pole. In 1928, he disappeared in the Arctic during a rescue mission to find several missing Italian explorers. Despite all that polar activity, he managed to find time to have at least three affairs with married women.

How do you define Celtic?

Celtic is as inaccurate and meaningless as the term Native American. The notion that there was a vast, Europe-wide race called Celts with the same culture, traditions and beliefs is not true. Many of these present-day cultural beliefs, traditions, clothing and music were made up during the Victorian era.

Is there anywhere in the world you still yearn to see?
I have never been to the central area of Russia, where most Russians live. I would also like to travel in the foothills of the Himalayas. My father spent many years there and as a child in Scotland I was fascinated by his photographs and stories. But because I spend my winters in the Antarctic and my summers in the Arctic, I would love to spend some time anywhere hot.

Jan. 17 :  Antarctica – An Overview
Jan. 31 :  Tom Crean: Serial Hero. The Forgotten Irishman behind the Success of Capt. Scott and Sir Ernest Shackleton
Feb. 14 :  The Highland Clearances: Scotland’s Ethnic Cleansing
Feb. 28 :  Why Was Shackleton Shunned? A Tale of The Great War, Edwardian Morals and the Theft of the Irish Crown Jewels