Mitchell Schweickert doesn’t mince words when talking about what Hudson River Housing’s Liberty Station has meant to him.

“Thanks to this building, I’m alive,” the veteran says while sitting in its library, after finishing a shift at his job selling T-shirts and other branded merchandise at the Poughkeepsie Underwear Factory. “My health is bad. I’ve got a lot of problems, but I feel safe here. Compared to other places I’ve been, this is a palace.”

Hudson River Housing (HRH) opened Liberty Station, which has 26 single-occupancy rooms for veterans, in 2014. It is one of a number of programs the nonprofit runs to keep veterans off the streets, including locating housing and jobs, rent assistance, assistance with benefits and sometimes standing in the rain to convince sheriffs to stop an eviction.

Unfortunately, the group’s five case managers are in danger of losing their jobs.

In September, the U.S. Department of Veterans Affairs denied a $500,000 grant for veteran support services that Hudson River Housing had received annually for the past five years. It had been the sole funding for the program. The federal government estimates about 40,000 veterans are homeless in the U.S. on any given night.

“We were shocked,” said Executive Director Christa Hines. Over the five years of the program’s existence, she said HRH had helped about 600 families and was on the verge of declaring an end to veteran homelessness in Dutchess County.

“We had been told we were one of their best grantees,” she said. “And there was no warning. We think it’s very short-sighted. You have to have a plan. You can’t just cease, because now all of these problems are going to come back.”

This month, Dutchess County gave HRH $100,000 to keep the program going while the staff works on a long-term solution. But that doesn’t allow them to continue giving rental assistance checks.

“In the first two months after we lost the grant, we had about 25 veteran families come in,” said Ed Reid, an HRH case manager. “We hustled like crazy to try and find them help and try and stop them from being homeless. And without the outreach we have, and the community of care that we’ve established, we wouldn’t be able to do it.”

Anthony Kavouras, a case manager who served in the Air Force for 34 years, said that other sources of funding focus on helping the homeless, not preventing veterans from becoming homeless. “They want the person to be homeless before we can help them,” he said.

Reid said that approach compounds the problem because once someone is evicted, his or her credit and credibility is shot. “Their ability to get work gets harder and harder,” he said. “The emotional and physical effect that it has on families, particularly the main breadwinner, is palatable with each regulation that feeds into that process of making them homeless first.” 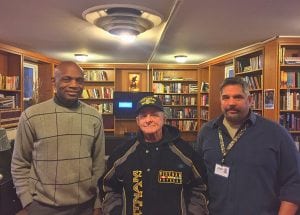 Ed Reid (left) with Army veteran Mitchell Schweicker and Anthony Kavouras in the Liberty Station library (Photo by B. Cronin)

“Think about the guy who’s behind $1,500 in rent,” said Kavouras. “He has a wife, two kids, and they’re going to get evicted over $1,500. Does it make more sense to let them get caught up, pay the $1,500, and let them stay in their home? Or, do you let them get evicted? Now they have to move! They have to pay probably two month’s security in advance, pay a mover — that’s more than $1,500 right there. You’re costing them more money by evicting them than letting them stay in their home.”

There’s also “the mental health aspect of keeping someone in their home,” he said. “They’re established, their kids are going to school there, everything’s already set up. It’s mind-boggling that they haven’t figured that out.”

Consider Schweikert’s situation. An Army veteran, he had been in transitional housing in Florida and New Jersey when he came to Poughkeepsie to stay with a relative. But he had to move out when the relative’s daughter moved back in.

Schweickert, who has suffered two strokes and two heart attacks, had a week to find a place to live. Hudson River Housing was able to get him into Liberty Station before he ever became homeless, helped him find work, and is working with him to receive the benefits that Schweickert didn’t know he was due after serving nearly 20 years in the military.

That was at the beginning of the summer. Had it happened just a few months later, after HRH lost funding for the program, Reid said none of it would have been possible. “He would have had to have one foot on the shelter steps before we could help him,” he said.

In the meantime, while the staff looks for new funding and revamps the veterans’ program, more families are coming in.

With the federal grant, “if there was an emergency, and we needed money, HRH would make a decision that day,” Reid says. “Sometimes we got it in the same hour. But now we’re working with much larger organizations for funding, and they tell us we have to wait two weeks. Meanwhile you have a family sitting outside on the street with no place to go and it’s snowing. We can’t wait two weeks. So our problem is, what can we do for them?”