A group of eighth-grade students at the Haldane Middle School addressed a joint meeting of the Cold Spring Village Board and Recreation Commission on Tuesday (Jan. 23) to propose a skateboard park at Mayor’s Park on Fair Street. They also suggested a substantial renovation of the pedestrian tunnel passing under the Metro-North tracks on Main Street.

The proposals were developed as part of the Design, Create and Innovate class at Haldane led by teachers Heidi Gesson and Michelle Hartford.

A model of the tunnel, constructed by the students, was displayed at the meeting. Their suggested upgrades include painting, decorative graphics, improved lighting and trash cans. The students hope to begin painting this spring. 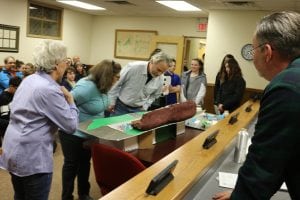 Mayor Dave Merandy said he was “all for it. I don’t see any reason why not. It’s a great idea.” He noted that the Highway Department would have to be involved and would likely take care of any prep work before students begin painting. He encouraged the group to research the best type of paint for the tunnel, which is often damp.

The skateboard park proposal was more ambitious. The students estimated it would cost $100,000 and presented a model of the facility. Their research included consulting with the Tony Hawk Foundation, which promotes public skate parks, along with detailed cost estimates and funding options. 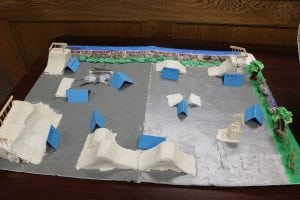 A model of a skate park they proposed for Mayor’s Park. (Photo by M. Turton)

Merandy was again supportive and added that the project would fall under the purview of the Recreation Commission. He complimented the students for taking the initiative. He also commented that the basketball court at Mayor’s Park might be a suitable location.

The mayor said the village and the Recreation Department “really should have activities for young people.” He said the need for such activities comes up frequently in discussions about how to address the opioid crisis. “Not having a place for anyone to go leads to boredom,” he said. “It would be nice to have a facility that would be used, that we can be proud of, and that people will invest their time in.”

At the meeting, Merandy addressed confusion over a test run by Royal Carting scheduled for Tuesday, Jan. 30, to determine the cost of outsourcing garbage collection, which is now handled by the Highway Department.

Royal Carting will begin the trial run at 5 a.m. It had been announced that the pickup would include recyclables, but Merandy said that was a misunderstanding.

The mayor also commented on what he termed “a knee-jerk reaction” to possible changes in garbage collection. “Other people have numbers and some people’s math is incredible,” he said “But we are going to do our own independent study.”

The test run, he said, will enable Royal to assess costs and submit a proposal. “Right now we don’t have that number,” Merandy said, adding that he would not rely on other people’s numbers, some of which he feels are outdated. “When we get Royal’s offer, we’ll look at everything: what it costs, the pros and cons.”

Merandy said the impact that garbage collection has on services provided by the Highway Department would be part of the evaluation. “Right now at least two days a week are taken up by garbage and recycling,” he said. “A lot of things can get pushed off. We really don’t have an efficient system.”

The mayor said the board would schedule public hearings but said “it won’t be a Facebook hearing; it will be held here,” at Village Hall. He also said Royal’s test would enable the company to estimate the cost of handling recycling.

Eighth-grade students from Haldane presented their ideas on Jan. 23 to the Cold Spring Village Board and Recreation