Guinan’s, the landmark store and pub that operated for some 50 years on Garrison’s Landing, closed a decade ago this week, on Jan. 31, 2008. Soon, a new restaurant and gathering spot will open its doors, most likely in May. The name — and it’s official now — is Dolly’s, a nod to the landing’s starring role in the 1969 film, Hello, Dolly!

With help from Gwendolyn Bounds, author of a memoir about Guinan’s, The Little Chapel on the River, we asked in print and online for memories of the place and its people. Below, some of the submissions.

Picking one favorite memory is probably like picking a favorite child, but I’m going with the red burning barrel. It’s where the Guinan family burned the cardboard boxes that arrived each morning after they had been emptied of donuts, bagels and pastries to sell. I loved taking a turn feeding the barrel, particularly on cold mornings, poking the trash with a stick and watching the fog peel off the Hudson River through the flames’ hazy heat. That memory, with the Metro-North train horns sounding, is still what “morning” means to me.

Ten years of morning coffee overlooking the Hudson after putting my wife, Sarah, onto the train for work. Seeing my first bald eagle. Conversations with John Horgan, which led to the publication of our book, Where Was God on September 11? “Irish Nights” during the winter in the back room filled with smoke and music leading eventually to Jimmy Guinan deciding to sing “Danny Boy.” One transcendent Irish night in late spring with chairs stretching halfway to the Depot Theatre and enough music and warmth to draw more than a few angels down from heaven.

Whenever I commuted to New York City, Jimmy would be there with a friendly hello and a coffee and buttered roll. Made commuting a little nicer!

Between the River and the Rails

When I’m feeling so low that road kill looks lucky,
This happens more times than you might like to hear.
There’s one destination that makes me feel better.
Down where the tide flows by just like the beer.

Between the river and the rails,
In the room behind the store.

Fireplace roaring, Guinness pouring,
How could you ask for anything more?

I remember our weekly family visit after Sunday Mass growing up. Mr. Guinan had all the newspapers marked with subscriber’s names. He always let us kids pick out candy from behind the shelf. We sat by the river with all the Garrison families and played while our parents caught up with each other. Life was good! 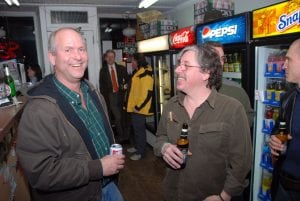 During the early days of closure talk, I wrote a poem to record the daily rhythm of what would be lost, in honor of the matriarch, called Where Peggy’s Still the Boss! Jim’s beloved Peggy was the clan’s matriarch. She was also the first person I’d met at Guinan’s in 1978 when my train to Syracuse broke down at the old Garrison station and I walked into the Store with the Pub in Back. Sometime later we moved here. 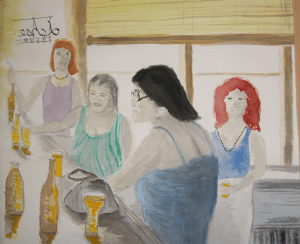 This watercolor (above) shows my sister Mari and wife Eugenie (both standing) and two friends Dori and Kathy (seated). It was done in 1986 but I believe the photo was taken in 1985. As residents of Cold Spring, have many good recollections of the Garrison Landing Yacht  Club (Guinan’s Pub). Mr. Guinan was extremely friendly and I had some good “crac” with him about my family in Ireland.

Jim had the rare gift of making everyone he came in contact with feel special. In the mornings, when I would get a cup of coffee at Guinan’s as an excuse to visit Jim, sometimes we’d sit in the back room with a fire raging in that awesome fireplace. Sometimes we’d have discussions and sometimes we wouldn’t. Either way, it was always comfortable and magic. I think of Jim often. He’ll always be one of my heroes. 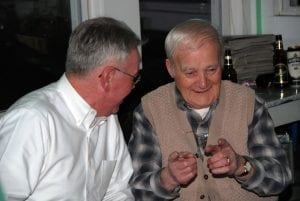 My dad took us every Saturday to get candy while he had a quick beer in the back.

I first entered the little store at the Garrison train station in 1989 while my fiancé, Siobhan, and I waited to pick up a young Irish relation interviewing for a nanny position at a big house nearby.

The wood floors, the old-time grocery and counters were charming enough, but the afternoon sun obscured a view of the back room where a lively conversation ensued. Curiosity got the better of me and breaking through the brightness I was greeted by the man himself, Jimmy Guinan. The small sloping storm window-clad room, adorned with personal memorabilia and rows of bespoke Sunday newspapers, was trimmed in Kelly green and boasted a tiny bar and a warm hearth which overlooked the most dramatic Hudson River and West Point views on one side and the roaring diesel trains on the other. 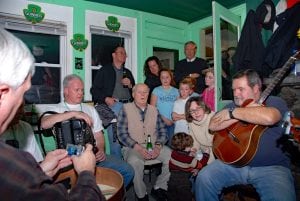 The room was never bereft of a rolling cast of characters, banter and Irish music, whether the litany of tunes that Jimmy dealt under his breath or the crowded joyful Thursday evenings after the full moon (one needed to be an astronomer to keep up with that rule) that were the Irish traditional Seisun nights. For many years hence a visit to Guinan’s was a short trip to real Irish hospitality.

In Jimmy’s memory, a picture hangs in the bar at the Quiet Man in Peekskill, the current home of the Rising of the Moon Seisun. Captured in the frames mystic light at the last such events at his hearth, sits Jimmy Guinan, belting out a tune, Tim Murphy following him on guitar; over their shoulder is a smiling Gov. Pataki, bottle of Coors Light in hand. I’m somewhere there that night in the crowd, like everyone else, wishing that night would never end.

Mr. Guinan’s place became, in many ways, the hub of a second family. Truly I miss the people and the place. I should have kept a tally of the cadets, soldiers and military families I drove to West Point after they missed the last ferry or the taxi never arrived. I miss Jim, John, Chris, Joe Brady Jr. and Mike at his corner of the bar, and the rising of the moon. 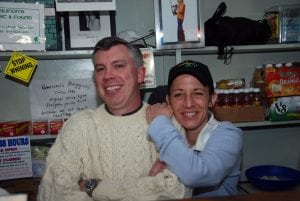 If those bar stools could talk …

First met “Himself,” as Jimmy was known, in 1971. I was working construction at West Point. A buddy and I had boated to Garrison’s Landing and Jimmy docked us at the marina. Showing typical Irish hospitality, he invited us to join him in the pub, where we met Peg and a few of the brood. We were treated to some fine Irish stew, and thus began a wonderful and warm friendship which endured for many, many years. God bless the Guinans. 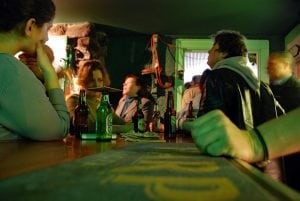 A view from the bar, looking north

I remember asking for a Bud and the price was $3. I tipped the bartender $5. One of the regulars said, “You must be a rich guy from the city.” I explained that I was far from it, and added that, the night before, I paid $9 for a beer in the city. He almost had a heart attack.

2 thoughts on “Memories of Guinan’s”