Town board concerned about toxic algae

The Philipstown Town Board earlier this month discussed whether to enact regulations to control faulty septic systems and ban fertilizers and other chemicals blamed for feeding toxic algae slicks on lakes and ponds.

The board discussed the issue at its July 12 meeting two days after a Putnam County legislative committee endorsed a program to help pay for home septic system repairs and the state Department of Environmental Conservation updated its list of lakes with hazardous or suspicious algae growth, including five in Putnam. A second list of lakes and ponds under watch includes Barrett Pond and the Beacon Reservoir in Philipstown and 10 other Putnam sites.

The DEC says most algae pose no health risks. But it cautions that some types, called Harmful Algal Blooms (HABs), contain toxins. Contact with HABs can cause vomiting, allergic reactions and breathing difficulties in humans and be fatal to dogs. Known as scums, streaks and blooms, HABs are white, red, yellow, blue, green or brown and often resemble spilled paint, pea soup and “floating dots or clumps,” according to the DEC.

They thrive in warmer waters (making them another byproduct of global warming) and feed on phosphorous and nitrogen from fertilizers and other lawn-care products spread through unchecked stormwater run-off and septic system failures. 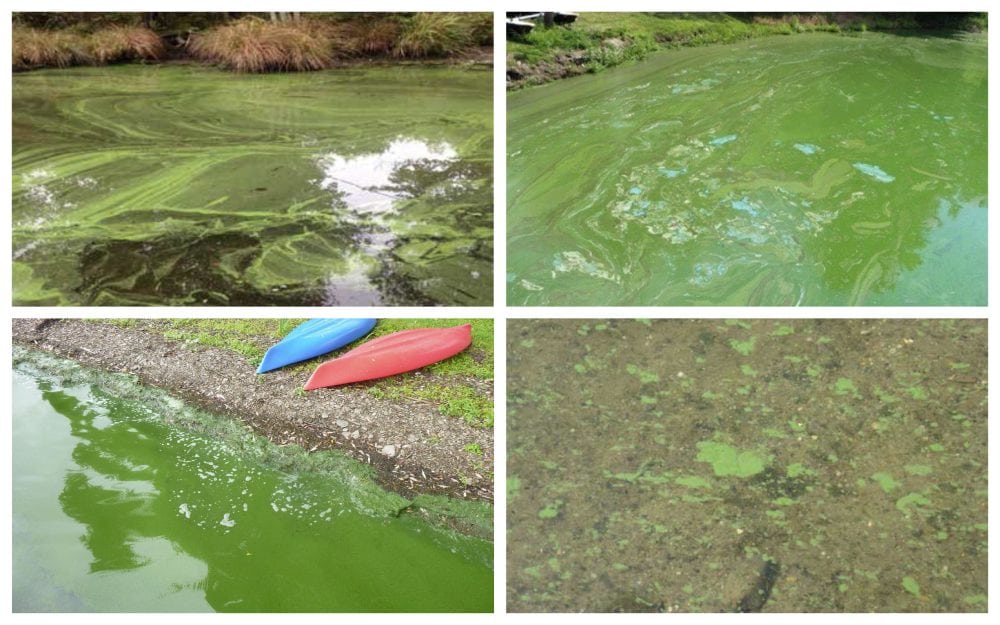 Harmful Algal Blooms, which contain toxins and should be avoided, can look in the water like (clockwise from top left) surface streaks, spilled paint, floating dots or clumps, or pea soup. (DEC)

Councilor Nancy Montgomery, who lives at Lake Valhalla, said she’s been “astounded” by the number of homes in her neighborhood with flags warning that their lawns were treated with chemicals.

“The lawns look beautiful, but I’m a little concerned,” she said. “It’s not natural for a lawn to grow like that in the woods.” She added that she “can’t find worms anymore to fish with because there is a change in the soil” and that she sees changes in the lake, as well.

In a later interview, Montgomery, a Democrat who is challenging incumbent Barbara Scuccimarra for Putnam’s District 1 County Legislature seat, explained that Lake Valhalla does not have an algae problem, but that tests have suggested a high phosphorous level. “I am alarmed” about possible future problems, she said.

“How many lakes are gone because of this?” she asked at the July 12 meeting, proposing that Philipstown act. She said that other municipalities prohibit application of chemicals near lakes and that perhaps “we can ban this,” too. She also urged that the town “have a better watch over” septic systems.

Councilor Mike Leonard observed that other towns in Putnam County have attacked algae, but that apparently “it’s almost impossible to fight it at the lake level. You have to fight it at the source” by restricting pollutants. He pointed out that practices acceptable at lakeside cottages that were once uninhabited much of the year no longer work when the cottages become full-time residences.

Scuccimarra, who chairs the county Legislature’s health and environment committee, made the same point on July 10, citing Lake Carmel and Putnam Lake as examples. (The DEC reports that the suspicious algal growths in two lakes have not yet proven by testing to be HABs.)

The three-member health committee voted to send a resolution to the full Legislature endorsing Putnam’s participation in a state program to prevent lake pollution. Established in 2017, it allocates $75 million to deal with cesspools and septic systems that pose risks to drinking water or lakes and streams.

Under the program, counties can receive state funds to reimburse homeowners up to 50 percent of the cost of replacing a cesspool or malfunctioning septic.

2 thoughts on “Slime on the Agenda”