As the race for Putnam County executive enters its final 12 days, the county’s handling of the senior center at the Butterfield complex in Cold Spring has prompted claims and counterclaims between MaryEllen Odell, the two-term Republican incumbent, and her Democratic challenger, Kent Supervisor Maureen Fleming, over who is more fiscally responsible.

The county is leasing 6,000 square feet inside the Lahey Pavilion for the Philipstown Friendship Center for 15 years for about $4.5 million, including rent, taxes, common-area charges and renovation.

“It is incredible to see how far the building’s transformation into the senior center has come,” said Odell, who recently toured the unfinished space and is scheduled to appear today (Oct. 26) at a ribbon-cutting. “The seniors on the western side of the county are finally getting what they have asked for and deserve.”

Fleming visited the Butterfield site on Oct. 12 for a news conference to denounce the center as a “boondoggle.” According to Fleming, as of Sept. 1, Putnam County had paid more than $200,000 in rent for the unoccupied space. 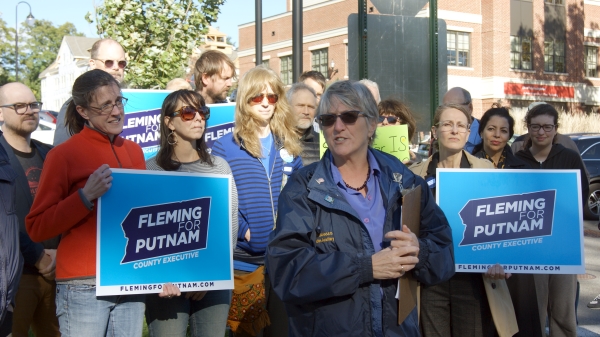 “We certainly want to provide the services and facilities our seniors need and deserve,” she said. “Unfortunately, this senior center has been dumping taxpayer dollars into the pockets of a leading Odell campaign donor,” developer Paul Guillaro. (According to state campaign records, Guillaro has given $250 to Odell’s campaign through Unicorn Contracting, $1,000 through Butterfield Realty, $2,000 through Hudson Valley Medical Building LLC and $1,000 through Lex Holding Co. The largest individual contribution Odell has received from a Philipstown resident is $1,000 from Diane Ferris, Unicorn’s general manager. The Odell campaign has collected about $120,000 in contributions from all donors.)

Odell responded that Guillaro donates to many Republican candidates and “supports people who he must think make great leaders.”

She further praised Guillaro for his commitment to local seniors, saying he wanted to walk away at many points when the project stalled but remained committed. “He’s been a real trouper, a great partner and man of great patience,” she said.

Fleming further charged that the lease price does not include any of the build-out or the furnishings of the center.

“Odell and the county Legislature have bonded — that is, borrowed — $800,000, and taken another $300,000 from the capital project reserve account to pay the general contractor and purchase kitchen equipment, furniture and fixtures,” she said. “This brings the out-of-pocket taxpayer cost for the build-out to over $1.5 million. Between the lease and the build-out, taxpayers of Putnam will pay more than $4 million for a 6,000-square-foot rental — a rental — and have no asset at the end of the lease. This is mismanagement of public funds.”

Odell, however, said the amount of money being spent on the project pales in comparison to sums spent elsewhere.

“The senior centers that provide nutrition and other services in Mahopac and Putnam Valley were $8 million and $10 million,” she said. “We can’t afford to build $10 million structures anymore.”

While the American Legion in Cold Spring allowed the county to rent about 250 square feet for senior services, the Mahopac senior center has 18,766 square feet, Odell said.

Fleming says that, during her two terms as Kent town supervisor, she has never raised taxes.

In response, Odell accuses Fleming of “willfully misleading the public, making false statements and promoting false advertising,” because her claim of zero tax increases “is a lie.” 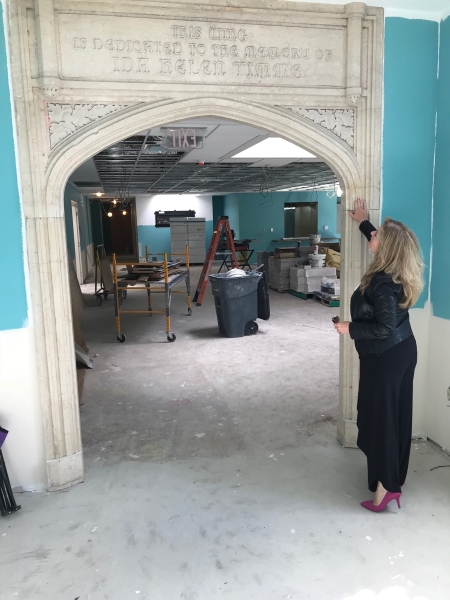 “As government officials, we cannot pick and choose which line items we get to include in our budgets and which we don’t,” Odell said. “We have a responsibility to tell the people the truth.”

Fleming responded that Odell’s accusations reveal “a shocking ignorance of basic municipal budgeting. She either fails to understand the difference between town taxes, which are levied to all town property owners, and special-district taxes levied only on properties within smaller districts such as sewer or fire districts — or she is willfully conflating the two in an attempt to distract voters from her own significant county tax increases.”

Odell said that under her leadership, Putnam County has stayed below the tax cap every year, reduced its short- and long-term debt by $40 million, and has the lowest county share of property tax bills in the state.

Fleming said her record in Kent proves year after year that “disciplined budgeting and honest leadership will deliver services without increasing taxes. I have never raised town taxes.”

Fleming has taken issue with Odell’s claim that she has reduced the county debt by $40 million. She cited annual financial reports that show $60.6 million in bond debt at the end of 2011, when Odell took office, and $60.5 million in 2017. The county has paid about $35 million in interest on its bonds since 2011, Fleming noted, and another $6.9 million has been budgeted for 2019.

The $40 million figure, Odell said, comes from that $17.2 million savings plus a reduction of $13.2 million in long-term debt payments and $9.4 million in pension amortization debt.