Feel the urge to sing? Free on Mondays?

You don’t need to be able to read music, or sing like a pro, to join the weekly rehearsals for the Putnam Chorale, a community chorus that hopes to recruit members from Philipstown after struggling to find an audience there for performances. (It has members from Beacon but none presently from Cold Spring, Nelsonville or Garrison.)

Based in Carmel, the Chorale doesn’t have auditions but does take its singing seriously and especially needs tenors and basses. See putnamchorale.org or call 845-520-7574.

Founded in 1984, the Chorale wraps its scheduling around four seasonal concerts that include an open summer sing and a community Messiah. This year it added an all-Haydn performance at St. Joachim-St. John the Evangelist Church in Beacon, and a smaller ensemble will perform a pair of holiday concert sat Boscobel in Garrison on Saturday, Dec. 15, of music that would have been heard in U.S. churches and homes in the early 19th century. (Both are sold out.) 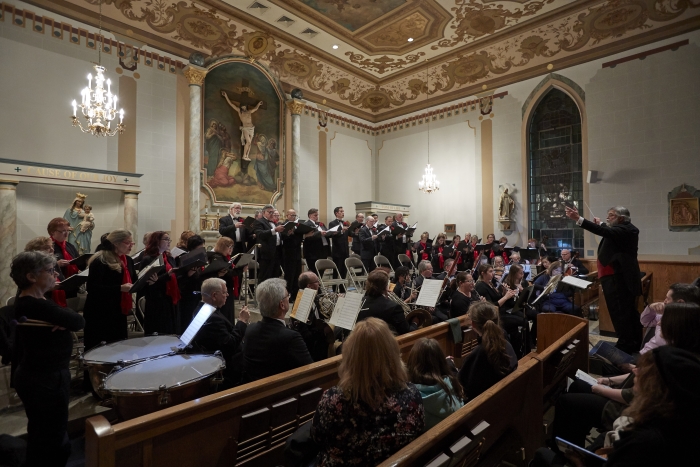 There are usually 45 to 50 singers in the chorale, and 20 in the ensemble, says Nick Simonelli, the president of the nonprofit’s board. “People rotate in and out; life intercedes,” he says. Simonelli has been involved since 1993, and some members joined in the late 1980s. Nearly everyone comes aboard after learning about the chorale through word-of-mouth, he says, or after hearing a concert.

Amy Rastadt, who lives in Beacon, joined two years ago, after attending a concert. She says she hesitated because she didn’t think she was good enough but went to a rehearsal after a member of her church choir told her, “You have to join this group I found.” There is a range of talent, Rastadt says, but “everyone is treated the same whether you are an extremely talented soprano or a middle-of-the-range tenor. Singing with this amazing group of people takes you away from the worries of the day.” 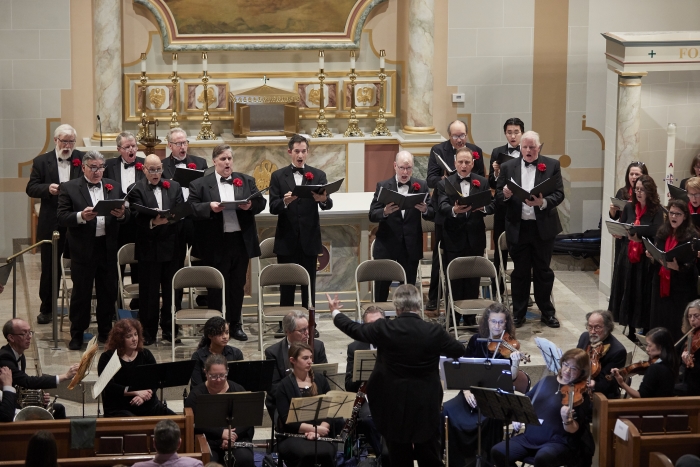 The Putnam Chorale at St. Joachim-St. John the Evangelist (Photo by Larry Baglio)

By contrast, Ed Broderick, who also lives in Beacon, has sung chorus and choral music for more than 30 years, including with the 175-voice St. Cecilia Chorus in New York City, where “singing the big classics twice a year was both a privilege and a huge motivator,” he says. Four years ago, when the weekly commute to rehearse became too much, he says he went “shopping for a high-quality local chorus.”

The Chorale raises money through donations, arts grants and member dues (although no one is turned away) to pay its artistic director, Douglas Anderson (a professor at City University of New York who also conducts the Downtown Symphony in New York City), its rehearsal accompanist, David Johnson, and soloists and musicians as needed for particular pieces. The ensemble performs at nursing homes and ceremonies such as tree lightings and also does caroling. 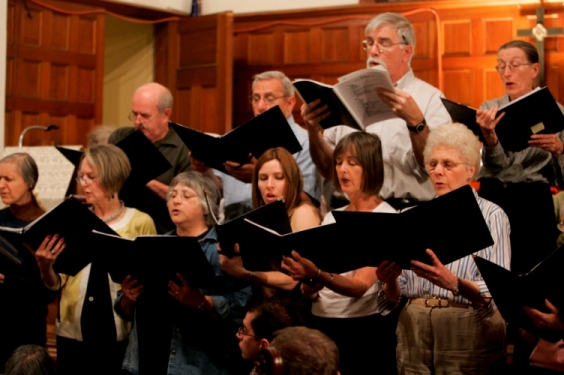 Members of the chorus at a rehearsal (Photo provided)

Rehearsals take place each week at 7 p.m. in Carmel or Brewster, with breaks for holidays, from the week before Labor Day through late April. There are also twice-yearly vocal workshops.

“We encourage singing out if you’re confident with a piece of music, and holding back if you’re not,” says Simonelli. “We have our share of retired music and piano teachers, but most people are new to this. Somehow it all comes together.”

The reward, he says, is “the thrill of performance. Anyone can sing in the shower or exercise their pipes in some way, but when you come together as a group, the music gets so immersive. There’s a happiness that comes from that.”