Last year was a Bah Humbug holiday for me. I listened to Mariah Carey’s “All I Want for Christmas Is You” and wished I felt more cheer. All the songs seemed fake. They were pushing a truth that doesn’t exist. I watched Elf on the Shelf YouTube videos with my kids, where families discover the elves, and I didn’t want to participate. I wouldn’t even pick up an Advent calendar in the Key Food checkout line because I’d had enough with the candy and the more, more, more things to do.

I had stopped hearing the bell. The Polar Express was going up and down my street, and I never heard a thing.

But like everyone else, I am a product of childhood magic. I believed. I stayed up all night. I listened to the faint crinkling of someone fiddling around, assembling, wrapping, placing. The final thud of the fat stocking. I believed even after I recognized (spoiler alert) Ms. Claus had the same handwriting as my mom. And finding a barcode on the packaging seemed odd. But whatever — it was magic. 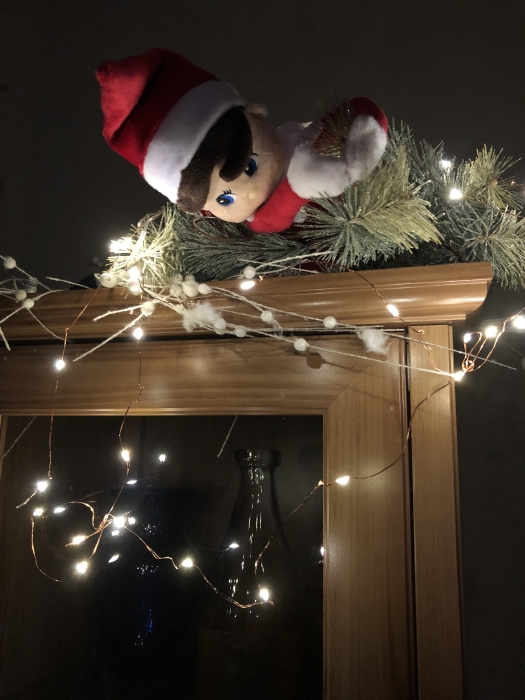 Elfa on the Shelfa (Photo by K. Martin)

Having young children, I am now part of that truth-building. I am part of the story told in movies about magical presents pulled out of a bottomless bag, that elves make the presents in the North Pole, that parents don’t have to buy anything. I was lying to my kids, and this was uncomfortable.

To fix this, I presented a budget to my husband and mom, and asked them to contribute to the 529 college funds instead. This did not go over well. My mom’s retail therapy runs deep, and my husband doesn’t like to deny anyone anything. The thing is, we are a self-employed family, and November, December and January are the dry months.

One morning, I was in AccuPrint in Beacon, shipping gifts. I saw a friend doing the same. She asked me how I was, and I told her the truth. I’d forgotten that her husband, like mine, also works in the film industry, so when she responded, “I know! December is our hardest month because the gigs end in November,” I cried right there and we hugged.

I told her about my attempt to place restrictions on my mom, who said she wanted to buy the “big Santa” presents. “You should let her!” my friend said. So I did.

This year, I still don’t have the ideal budget, but I know how to make the magic. I bought the Countdown to Christmas calendar at Alps Chocolate. It was going to be the first gift from our Elf on the Shelf on Dec. 1. Bam! Combo move. It turns out our new elf, who has been named Elfa, shares my daughter’s love of decorating and brings the kids Christmas decorations, which was actually a request from my daughter in her letter to Santa.

When I started this column, it was 5:58 a.m. on a Tuesday, my quiet moment pre-dawn. I placed Elfa in a tricky location with some new faux garland and battery-powered lights as her gift. As I waited for my coffee to soak in my French press, I heard a soft bell outside. No one else was awake except for our cat, drinking from a porcelain bowl, his nose tapping the side. It’s an odd thing for a cat nose to be able to do — sound like a bell. But it did. And I heard the bell.