The founders of a Beacon knit shop discuss their connections

Anna Pulvermakher and Oejong Kim are the founders of Loopy Mango, a yarn and knitting store at 500 Main St. in Beacon. Their first book, Loopy Mango Knitting, will be published by Abrams in the fall. 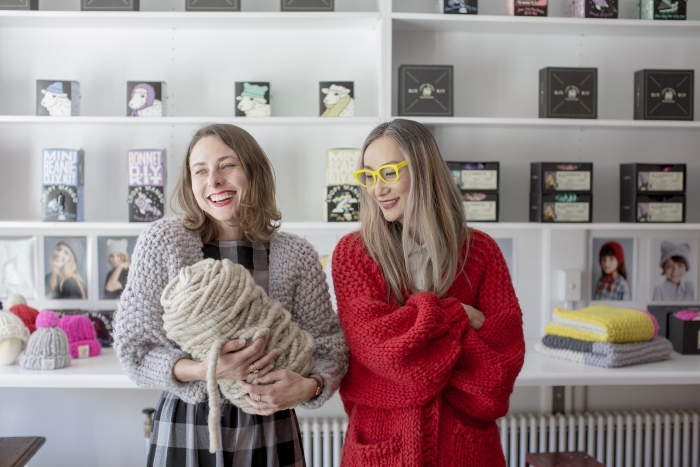 How did you meet?

Pulvermakher: Fifteen years ago, at a workshop at the Fashion Institute of Technology, I opened the door and there was Oejong.
Kim: She fell in love with me.
P: I said, “Wow I’ve never seen anyone like her before!” When people meet her, they just want to be around her.
K: Not true.
P: It’s true! When she was living in Japan, this one woman wanted to adopt her, even though she was in her 30s.
K: I was nicer then, and not so grumpy.
P: So we barely knew each other, but I was working on a series of portraits and I asked her if she wanted to pose. A month later she came to my studio, and while she was posing, she was crocheting. And I said, “I used to crochet when I was little with my mom and my grandma.” But she was doing it in this modern way that I had never seen before. She took me to some yarn stores. Then one day…
K: I said, “One day I’d like to open a store.”
P: So we went to Avenue B and opened a store. We thought we could make money selling her crocheted hats and my artwork.
K: Do you remember B Side? The bar? We were right next to B Side.
P: Everybody remembers B Side.
K: We were there for a year. Then we moved to Brooklyn. It became a lifestyle boutique. Then we moved to SoHo. But it was during the recession and there was scaffolding blocking our storefront.
P: We were almost going out of business. Oejong said, “We’ve tried selling everything, but I want to sell yarn. Let’s sell yarn.” And I said, “No way.” But we were desperate. So we bought some yarn, and suddenly people started coming for our yarn, because Oejong has a good eye and she knows what people like. We wanted to teach people how to knit but in Manhattan everyone has a short attention span. We wanted giant yarn so that they could knit something fast. Nobody was making giant yarn, so we bought equipment and started spinning yarn called Big Loop. Then they doubled our rent, so we moved to Key Largo, Florida.
K: You don’t think of wool when you think of Florida.
P: We focused on production and online sales. We were in Florida for three years, but Oejong got divorced and it had been her husband’s idea to move to Florida. We kept the production and fulfillment in Florida, but we wanted to go back north and we didn’t want to go back to the city. One day we ended up in Beacon. We didn’t know anything about it.
K: We saw a “For Rent” sign and the space had a studio upstairs.
P: We took 20 minutes to make the decision. 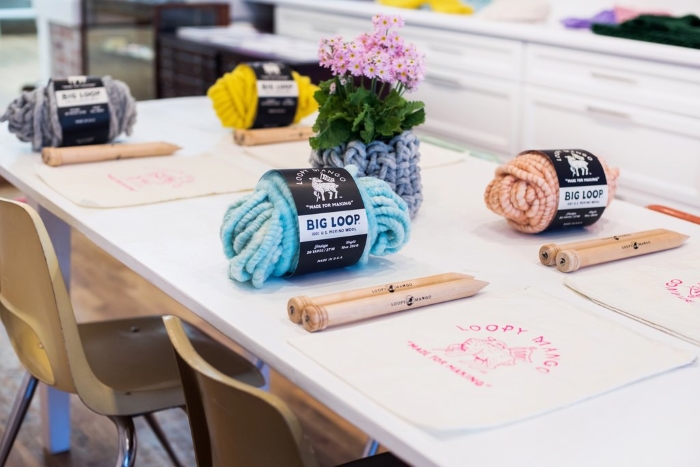 How does this iteration of Loopy Mango compare to the others?

K: These days you have to do business differently. A physical location is important, but it can be anywhere. And people want to know the story behind the product.
P: During those three years in Florida, we didn’t have a retail space. But we make yarn, and people want to feel it, touch it, try on a sweater before they buy the yarn to make it.
K: We had a customer drive a long way here because, even though she had the pattern, she wanted to talk to us and make sure she was doing it right. It’s nice to meet people like that.

Can you explain the resurgence of knitting?

K: It skipped a generation. It used to be an uncool grandma thing. But now a lot of young people, because they’ve only seen their grandma do it, have nostalgia for it.
P: There are companies like ours putting a modern twist on it, and because our yarn is so thick, it’s easy to make something with it.
K: After all the manufacturing moved to China, people wanted to know more about not only crafts and their clothing, but their food.
P: You want to know about where ingredients come from and use those to make your own things as opposed to buying something that’s mass-produced. You know slow food? This is slow fashion.

Did you make the sweaters you’re wearing?

P: We knit so much that we can’t remember who made what. We also hire remotely trained knitters. They’re all women, and a lot of them have small children at home. Everything is made in the USA. If our goal was just to make money, we’d make acrylic yarn in China, but we don’t like acrylic. It’s a synthetic fiber and it only benefits the oil industry. It’s bad for the environment, and it’s bad for you. So we do natural fibers that are biodegradable. Obviously we need money to sustain the business, but it’s not the main goal. The main goal is to get more yarn and knitting needles for Oejong!

What does Loopy Mango mean?

P: I asked my friend, Vlad, to help us with a name. He said, “How about Loopy Mango? You two are so loopy.” And it stuck.