But a few years ago BeaconArts, inspired by the annual Windows on Main displays, realized any respite from the weather could be enlivened by art.

Kelly Ellenwood, who was then director of the organization, wrote a grant request to place artwork in the city’s bus shelters. The application was unsuccessful, but, as she recalls, “it pushed me to think of more we could do to utilize all of these utilitarian spaces and create community through the arts.”

The Beacon City Council came through that year and the next with funding; this year, for the third annual shelter installations, Dutchess Tourism provided a grant and Arts Mid-Hudson helped administer the project.

The latest installations were put in place in October; six shelters became canvases, up from five in 2018. The artists who submitted work for consideration were told the interior dimensions of the space, that the piece would be divided on two panels and that it should be striking from a distance.

Five artists were selected through an open call among BeaconArts members, while a sixth, Melanie Perez, is a student at Peekskill High School who participated in the Dia Teens program at Dia:Beacon.

The project was organized by BeaconArts board members Michelle Alumkal and Karlyn Benson with assistance from Pam Dailey, Theresa Goodman and Eric Hauser. 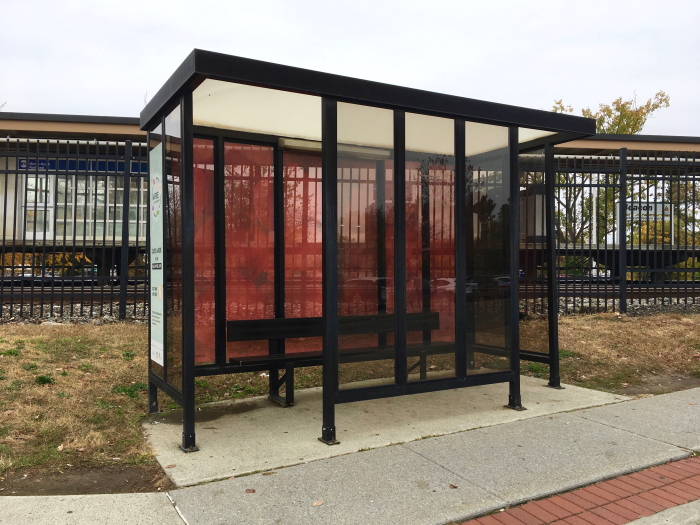 Beth Haber / Metro-North. The work, from a series called Flow Texts, is structured like open pages of a book. “The series melds the forms of earlier carriers of information with digital language as it migrates in meaning from one thing to another.” 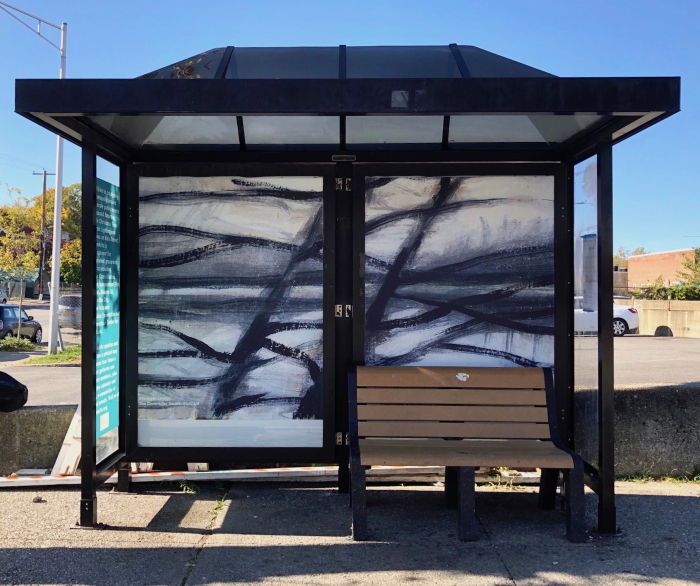 Elizabeth Lindy / Veteran’s Place. “I couldn’t be more excited to have my 2-by-5-inch Hudson River abstract painting blown up on a huge bus shelter.” It’s part of a series of drawings Lindy made while looking out the window during her daily train commute. 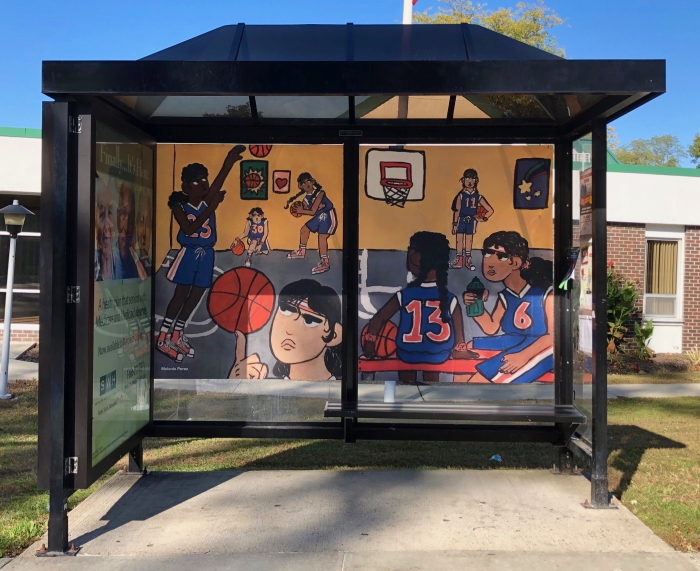 Melanie Perez / Wolcott Avenue at Forrestal Heights. “The artwork is inspired by my experience on the school’s girls’ basketball team. I wanted the public to acknowledge these athletes and the hardships they face just for being females playing sports.” 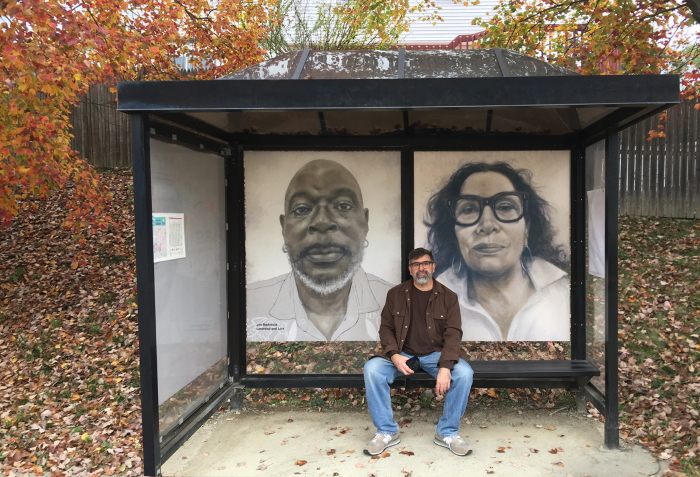 Joe Radoccia / Wolcott Avenue near Hudson Avenue. “For the past few years I had been working on a series of larger-than-life portraits of LGBTQ elders, staking their right to be present in an open environment.” 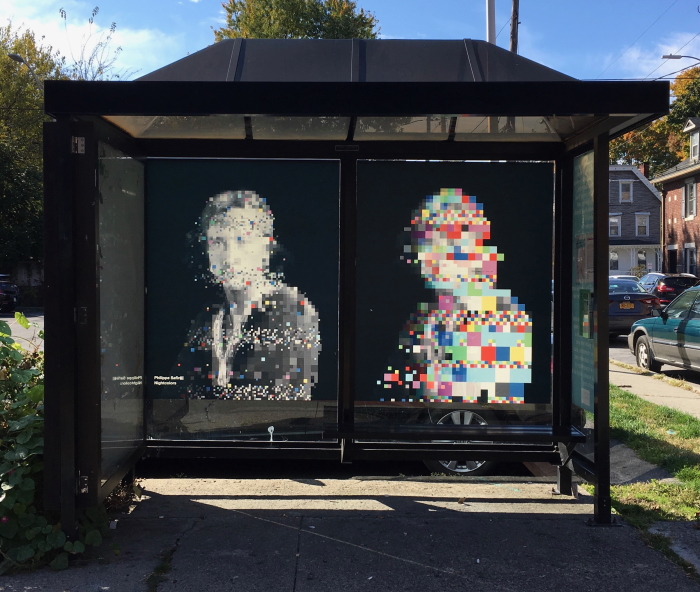 Philippe Safire / Main at Cliff Street. “I wanted my artwork, nightcolors, to blend into the movement of the city, whether the viewer is walking or driving by.” 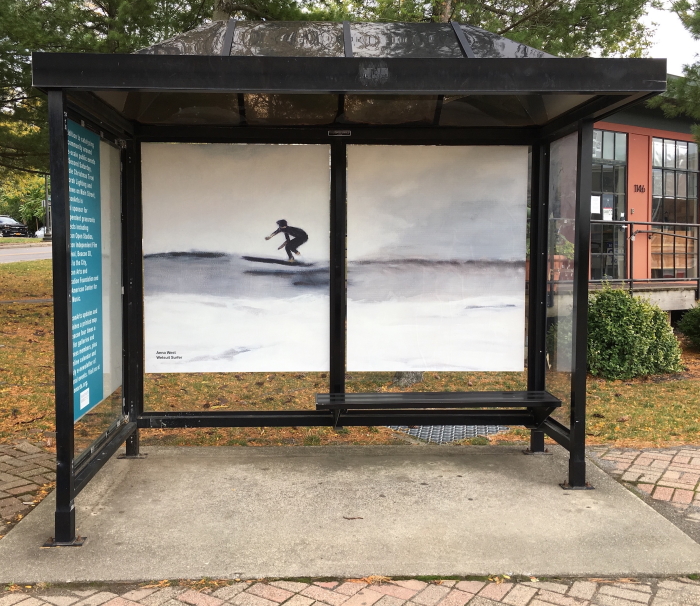 Anna West / Polhill Park. “I chose the surfer because I thought one ride deserves another. When I ride the bus, I look out the window and daydream about what I just saw fly by, or a recent trip to the beach or the pool, or a meal last week.”

Alumkal says the curators chose the artists, “then determined what would fit in which location. For instance, Joe’s are so large that the faces are better seen from a distance, while Melanie’s felt perfect being near the basketball courts.”

Alumkal says she wishes she could “hear from people who sit at the stations every day. I wonder what they think, if it makes a difference. They were very curious while we were doing it. I also wonder if on Main Street the store owners, people facing the artwork, if they develop a relationship with it.”

Installing the works was no easy feat. After the images were transferred to vinyl sheets, the vinyl was laid out at each site and the backing peeled off to reveal the adhesive. “Placing it requires a bit of contortion and skill at getting the bubbles out,” she says.

Adds Benson: “This project is so important because, even with the loss of galleries and loss of places to exhibit, people can see there’s still art in Beacon.”