Girls’ and boys’ teams both advance in state tournament

The Bulldogs won their Section 1, Class A basketball tournament qualifier on Saturday (Feb. 15), upsetting Saunders, 54-46, in a game played in Yonkers. 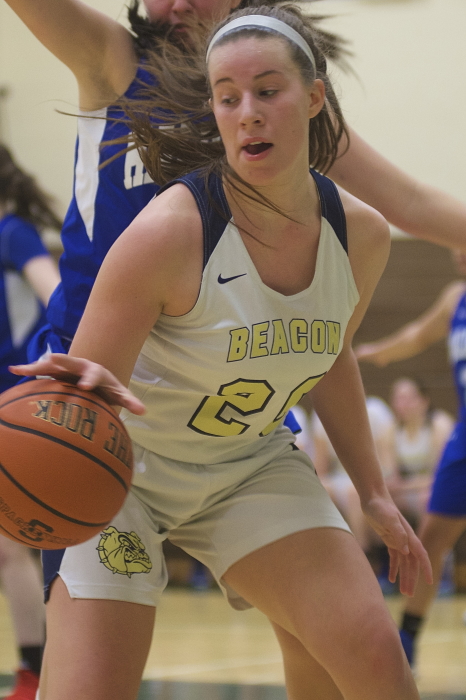 Grace Affeldt led the Bulldogs with 11 points in a win over Saunders. (Photo by S. Pearlman)

Coach Christina Dahl said she liked the way her team worked together to reach the first round.

“We got a balanced effort,” she said. “All five of our seniors started, they all chipped in, and all played good defense. We had a game plan and did a good job executing it.”

Grace Affeldt led the Bulldogs with 11 points, while Skyler Kurtz had 10, Anita Rodriguez and Analiese Compagnone each had nine, and Devyn Kelly added six.

“Kelly and [Tianna] Adams were great off the bench,” Dahl said. “Those are two freshmen who we will be seeing good things from in the future. Dior Gillins also played well.

“We’re looking forward to Harrison,” she said. “We’ll need to go in with good energy and limit them to one shot [on each offensive trip]. And we’ll have to be able to put the ball in the basket. When we can do that, we can be good.”

The Bulldogs made short work of visiting Somers on Saturday (Feb. 15), rolling over the Tuskers, 57-37, in a Section 1, Class A basketball tournament qualifier at Beacon. 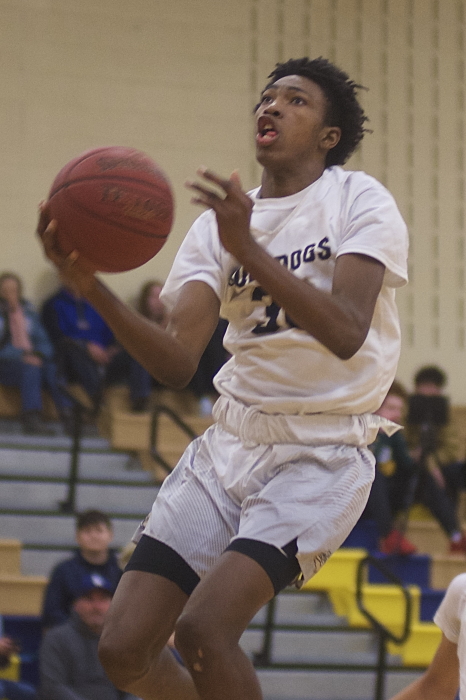 Quazir Hayes had 15 points and 10 rebounds for Beacon in the win over Somers. (Photo by S. Pearlman)

The Bulldogs took care of business early against No. 20 Somers (8-13).

“The game was all about our defense,” Coach Scott Timpano said. “We only allowed 11 points in the first half — that’s a season best, and that’s an incredible accomplishment. We limited their second-chance opportunities. We knew they like to shoot three-pointers, and we didn’t allow them to get going outside.”

“Quazir had a tremendous game for us,” Timpano said. “Somers was not able to handle his athleticism. And Kam was everywhere; he was the spark we needed. Ian Bautista was also rock-solid.”

The Bulldogs lost to Poughkeepsie at home on Dec. 10 by 24 points but were more competitive on the road on Jan. 7, losing by 13.

“Poughkeepsie is fast and aggressive,” Timpano said. “The big thing for us will be to try to slow them down and limit second-chance opportunities. And you have to be able to handle their press. We have to be as close to flawless as we can get.”