After holding public meetings throughout 2017 and into 2018 to gather community input on how to redevelop the 153-acre former Texaco Research Center just outside of Beacon, its owner has put the site on the market.

Chevron said it hopes to find a buyer who will develop the property, now known as Glenham Mills, and assume responsibility for the ongoing environmental cleanup. A sign posted along Washington Avenue, between Beacon and Fishkill, shows the land as “available,” rather than “for sale,” because a price has not been set, said Phil Avocato, a Chevron representative.

“We’re trying to get an idea if anyone is interested,” Avocato said.

Texaco purchased the site in 1931, operating a self-contained community and research center there for decades that developed and produced high-performance aviation gasolines and other industrial products. Chevron merged with Texaco in 2003, then closed the facility and began assessing decades of chemical dumping near Fishkill Creek, which divides the property. 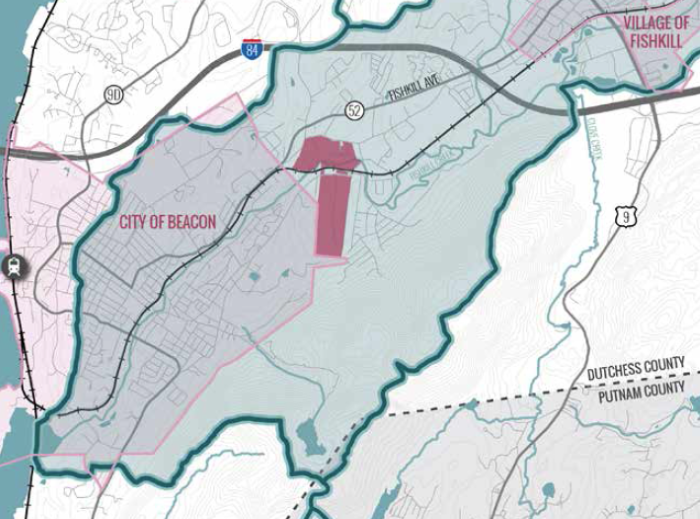 The former Texaco site, at center, covers 153 acres in Fishkill and a sliver of Beacon. (Chevron Glenham Mills)

In August, Chevron submitted a report to the state Department of Environmental Conservation summarizing its “environmental investigations,” Avocato said. The company and the DEC must agree on a plan to remediate the property; if it’s sold, the buyer would have to continue those efforts.

After holding the community meetings, Chevron produced a 150-page document that includes, along with historical and contextual information on the site, sketches of four redevelopment scenarios.

Each option includes residential and commercial development clustered at the northern half of the site, which Chevron called the “most heavily disturbed” portion of the old Texaco campus. One of the scenarios would preserve the “Back 93” acres south of Washington Avenue — once used by Texaco employees for recreation — as open space, while the other three would allow varying degrees of development, most of it residential, in that area. 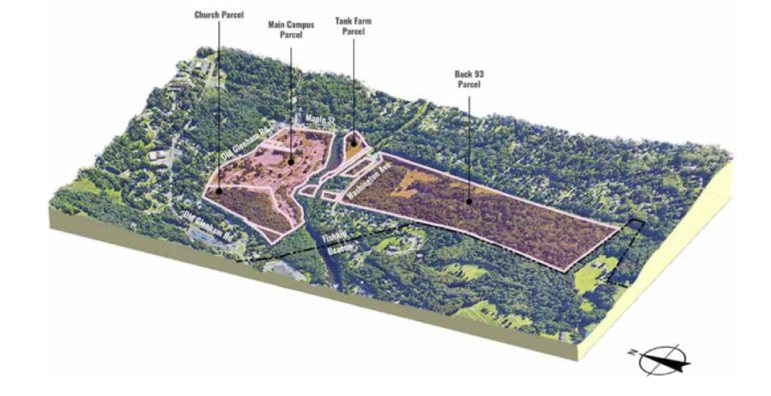 The site was home to some 1,000 employees and their families. (Chevron/Glenham Mills)

Deb Davidovits, who lives in the nearby Beacon Hills community, said she isn’t sure any of the scenarios reflect community wishes.

“There is a lot of support for some level of development on the northern parcel,” she said, mentioning restaurants, artists’ spaces and small businesses as examples. “But my impression is the community does not want high-density housing.”

Each of the scenarios includes a mix of high- (24 units per acre) and lower-density (8 units per acre) residential building. The property is zoned for “planned industrial” uses; any change to that would have to be approved by the Fishkill Town Board.

The redevelopment of Glenham Mills would likely impact Beacon, as well. The site, which at the height of the Texaco era was home to some 1,000 employees and their families, falls within the Beacon City School District. Glenham Elementary, one of Beacon’s four elementary schools, is less than half a mile away. 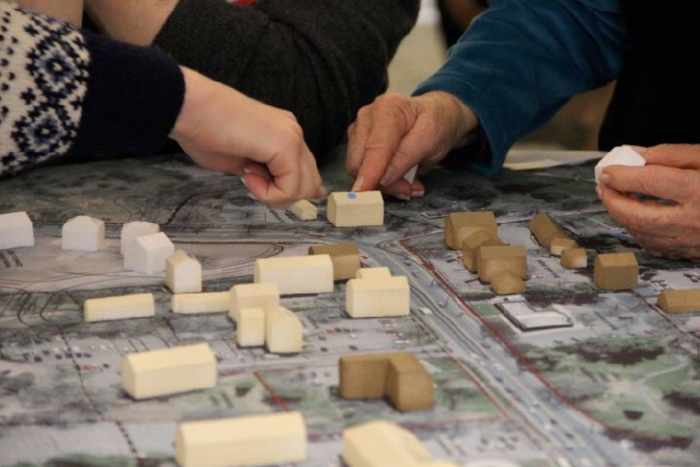 While the company plans to vet potential buyers “with respect to their ability to assume environmental liability as well as the viability of their development plans,” a buyer will not be obligated to pursue one of Chevron’s redevelopment scenarios, Avocato said.

“We’re making that available to any potential buyers,” he said, but “it’s simply a document that shows them what the community is interested in.”

That’s a shift from two years ago, when Chevron consultants said the firm would approach builders with experience in projects similar to those preferred by the community.

The crash of global crude oil prices could be a factor in Chevron’s decision to divest itself of real estate such as Glenham Mills. On March 3, the company said it planned to curtail its spending through 2024, and prices have fallen even further since, hitting 30-year lows.