This genesis of this column was an exercise in bringing a little mindfulness to the activity of cooking and, therefore, eating.

The reasons we cook, beyond mere sustenance, are critical in the current state of affairs. When the whole of humanity is living on the edge, its fundamental importance takes on more urgency. It’s a pandemic! No, it’s an existential crisis! It’s two quandaries in one!

In such times as these — and I promise to not use the c-word or the term social distancing beyond this point — the activities in question boil down to: “What’s available to me here-and-now and what can I do with it to satisfy the visceral and emotional needs of those I am responsible to and for?”

This is certainly no time for stupid food tricks, but when we’re confronted with bare shelves and mouths to feed, something’s got to give. Usually that something is the simple and always-available-but-elusive joy in the process of putting tasty, nutritious food on the table. 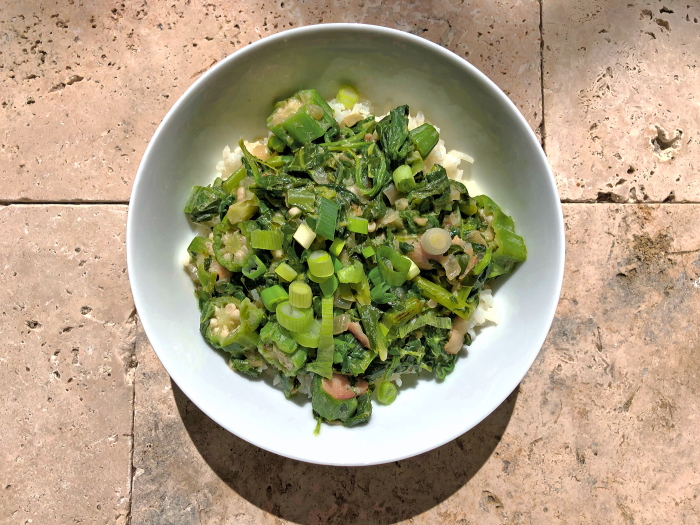 The situation called to mind food writer M.F.K. Fisher’s eloquent How to Cook a Wolf, published during World War II at the height of food shortages and rationing. The wolf in question was loudly knocking at the front door. Fisher extols the voluptuous joy, wonder and discovery of transforming the most common ingredients into a loving feast.

Thus inspired, I ventured to the local supermarket, still in the early stages of the hoarding panic. Surprisingly, there was still a fair amount of fresh produce, but I was interested to see how we might cope in the worst-case scenario and made a beeline to the frozen foods, which offer the homebound chef an extended pantry picked at its freshest and just as healthful and tasty.

I came upon a couple of lonely boxes of chopped spinach, some equally humble collard greens and a bag of sliced okra, a secret favorite of this Louisiana son, which would normally prompt a pot of gumbo z’herbes (a vegetarian version of gumbo) but for some reason flashed on the memory of a delicious dish of callaloo at the Caribbean Star Restaurant in Harlem.

Callaloo, which is a pot of greens stewed in coconut milk with onions and spices, seemed eminently doable under the circumstances. Risking accusations of cultural appropriation at the promise of a good meal seemed a fair trade-off. Then, too, Callaloo has the M.F.K. Fisher-approved advantage of being malleable in a variety of recipes: in addition to being served as a stew over rice, it can be served as a vegetable side, or as a main course with the addition of shrimp or crab (admittedly a luxury, but…). It can also be pureed and used as a dip or thinned with water or stock and served as a soup, so leftovers are wise and encouraged.

Somehow more appealing was the exotic promise of a little West Indian heat and creamy coconut milk, which also afford a welcomed antidote to the early spring snow in addition to offering distraction from the crisis. So herewith, an admittedly inauthentic version that I and my closest have enjoyed in various guises over the last few days. I sincerely hope you and yours find it inspirational and enjoyable. Stay curious, safe and healthy.

A Kind of Callaloo

Note: Add grilled or sautéed shrimp for a heartier main course, or puree and serve as an alternative to spinach dip. To serve as a soup, add two to three cups boiling water after the vegetables have been pureed. Adjust salt and pepper accordingly.