With the first quarter of 2020 over, Putnam County legislators last week took the opportunity for a new review of the Sheriff’s Department overtime costs, an effort shadowed by the COVID-19 threat and memories of intense debates.

In a meeting on Wednesday (April 15), the Legislature’s Protective Services Committee quizzed Sheriff Robert Langley on his agency’s overtime expenses from January through March. The committee met by remote audio connection because of “stay home” mandates to minimize the spread of COVID-19.

The legislative Personnel Committee, which met after the Protective Services session ended, also touched on the issue with regard to the status of school resource officers while schools remain closed.

Late in 2019, the Legislature initially rejected a request from Langley to transfer $121,000 from one internal account to another to cover overtime costs for road patrol. It subsequently allowed the transfer through a series of budget amendments. 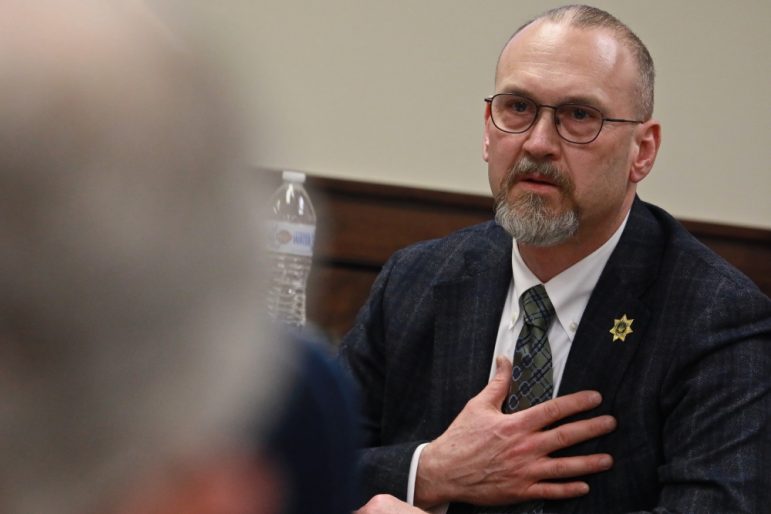 On Feb. 4, the Legislature adopted a requirement that department heads get permission before exceeding their limits for “non-mandatory” overtime. Langley told legislators in January that he was short six deputies, including one wounded in a knife attack that month and another seriously injured in December while directing traffic. The county cut the budget for road patrol overtime from $600,000 in 2018 to $537,000 in 2019 and $520,000 for 2020.

“We did see quite a bit of excess overtime last year,” when the Sheriff’s Department topped the amount budgeted by about $100,000, and “we went through quite an ordeal discussing” it, recalled Legislator Paul Jonke (R-Southeast), who chairs the Protective Services Committee. Now, he explained, the committee wanted “an update on where we’re at. Have we exceeded 25 percent [of the 2020 total] budgeted for overtime?”

Langley reported that some expense lines have topped 25 percent of the budgeted sum but that reimbursements from other agencies will reduce the impact. For example, when the department receives $14,000 it is owed for youth and community service initiatives, overtime expenses for the first quarter of the year will fall below 25 percent, he said.

Moreover, he explained, some deputies take overtime compensation not as cash payments but as “comp” time, or comparable hours off, a practice that trimmed the first-quarter overtime outlay for patrols by $6,554.

Also, with schools unlikely to re-open this semester, SROs have returned to regular duty, filling in for those on leave or replacing deputies who retired or took other jobs, he said. “They’re being utilized wisely to eliminate the need for overtime.”

Thanking Langley, Jonke added, “It really is going to be helpful for the taxpayers of our county, because God knows where we’re headed, given the circumstances we’re all living in right now.”

When the Personnel Committee convened, Langley added that the search for a sergeant to supervise the SROs has been suspended. “It would be best to keep that money in reserve,” he said. “We will re-evaluate it when we get closer to the school season” for the fall.

“I’m so grateful those deputies are on the road. We need every extra person doing road patrol now more than ever,” said Legislator Nancy Montgomery (D-Philipstown).

COVID-19 has affected the department itself, according to Undersheriff Kevin Cheverko, who reported that 13 deputies missed two to 18 days of work because of exposure to the virus, and that two tested positive. “Depending on how this goes, overtime could very well increase,” Cheverko said.

Montgomery lauded the Sheriff’s Department for the detailed information it provided but chastised her fellow legislators for what she described as a selective review. “I’d like to see this across the board in every department,” she said. Instead, “we seem to be targeting this department” when “they’re protecting us at our most vulnerable time.”

The criticism in December of the Sheriff Department’s overtime spending seemed to be a sudden change of approach for the Republican legislators, who for years had routinely approved such transfers. In 2018, the Legislature OKed Langley’s requests to move at least $192,000 to cover overtime, and in 2012 and 2014 it approved requests from Sheriff Don Smith to move $200,000 or more to cover overtime.

The Sheriff’s Department, which includes the jail and probation officers, spent $2.5 million on overtime in 2018, according to records obtained by The Current through a Freedom of Information Law request. Of the county’s top 25 overtime earners, 15 were sheriff’s deputies and nine were corrections officers. By comparison, the Highway Department spent $541,000 and all other agencies $465,000.