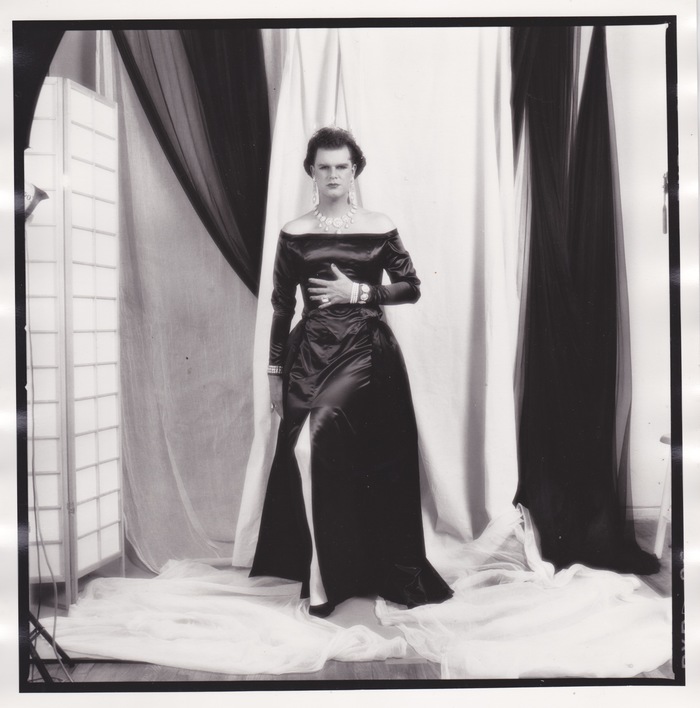 Lady L, at full sail, in a gown by Anthony Wong. (photos provided)

Thirty-some years ago, during the 1980s, Lithgow Osborne lived in the East Village in Manhattan, pre-gentrification, and socialized with a group of friends who called themselves the House of Twelve.

The friends held salons at which everyone would perform, recalls Osborne, a fine art and antiquities appraiser who lives in Cold Spring and who was then an uptown interior decorator. “We were all having a good time. I hosted most of the time because I had a living room and enough chairs. It was all about the chairs.”

Osborne’s apartment happened to be near the Pyramid Club, a nightclub and cabaret that was a hangout for drag performers such as Lypsinka, Lady Bunny, RuPaul (whose first New York City show was at the Pyramid in 1982) and Lady L.

The “L” stood for elegant, and also for Lithgow.

As Osborne recalls, he was watching a show at the Pyramid when three friends — the performer: Brian Butterick (aka Hattie Hathaway, the club’s creative director, who later co-founded Wigstock); and Hapi Phace (a performance artist, emcee and prop maker) — encouraged him to give it a go. Initially reluctant, Osborne “pulled something together” with a friend.

“It looked OK,” he says. “It was what it was, but Hapi liked our repartée and energy onstage. Hattie told me to come back, and to pick a name.” Lady L was born.

“I liked everything to be chic and sophisticated,” Osborne says. “My character was very much a lady. It always involved diamonds and pearls. Anthony Wong made some costumes for me, mostly navy blue satin trimmed in black satin, curvy and just all perfect. They were made with a little bit of padding on top, not that much — I never liked that look where men put on drag with enormously big breasts; it’s too clowny. I was not a young, boppy chick.”

Lady L performed at the Pyramid, as well as at the Roxy. “It was mostly lip-syncing,” Osborne says. “I did standards, from Ella Fitzgerald to Gladys Knight.”

Asked to contribute to a Christmas show at the Pyramid, Osborne created Lip Sync Theatre. He wrote a script, which was recorded, “and in the middle of the recording I dropped in songs. Nobody had to learn any lines. It seemed ridiculous, but it was hilarious because most of the people didn’t know what they were doing. It was a big hit.” 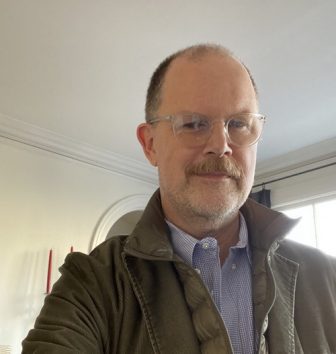 Although he lived nearby, Osborne dressed at the club, except for the one time he decided to get ready at home and walk. “I was not considering it might be dangerous or difficult,” he recalls. “I was 6’7” in heels, wearing a tiara I had refashioned from a rhinestone one by adding things to it. I got stopped by a number of people. They were amazed. It was kind.”

He also performed periodically at benefits at the Gay and Lesbian Center for groups such as ACT UP (AIDS Coalition to Unleash Power) and God’s Love We Deliver. For the latter, he sang “Have Yourself a Merry Little Christmas.”

Osborne’s drag career slowed over time, by choice. “It was fun but amateur theatrically,” he says. “It came easy because I had been involved in theater as a kid, at the Auburn Children’s Theater [in the Finger Lakes] — we’d go around on a wagon, performing shows. It was the same kind of ‘Let’s put on a show’ energy.”

Performing “took up time and energy to do it right, and it got to the point where I had to ask myself, ‘What am I doing? Which direction am I going in?’ I decided it was exhausting, and I made a different life.”

To retire from the stage, Osborne grew a mustache. “That signaled the end,” he says. “Some people could pull off the facial-hair-and-drag combination, but Lady L was an early 20th-century English gentlewoman living in Manhattan. No mustache for her.”

2 thoughts on “Something You Don’t  Know About Me: Lithgow Osborne”