Federal loans can be forgiven if jobs retained

A federal program created in response to job losses because of the COVID-19 shutdown brought at least $34 million to the Highlands and saved 3,500 part- and full-time positions, according to data released by the Small Business Administration.

The Paycheck Protection Program was established to provide small businesses and nonprofits with low-interest loans to pay employees who might otherwise lose their jobs. If the borrower doesn’t lay off employees or reduce salaries, the loan can be forgiven.

President Donald Trump this week signed an extension of the program through Aug. 8. (See sba.gov.)

Although the U.S. Treasury, which oversees the SBA, initially said it would not identify those who received the loans, it changed course and on July 6 released two lists. 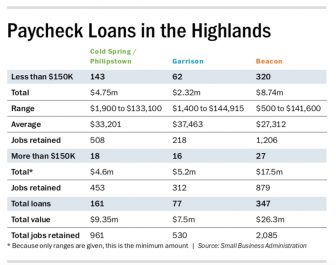 The first, of those who received less than $150,000, does not identify the recipients. Instead, it includes only the town or city, amount of the loan and how many jobs the employer said the loan would save. (Highlands Current Inc., which publishes this newspaper, received $42,350 to retain five jobs.)

The second list, of firms that received $150,000 or more, gives the name of each recipient, a range for the amount of the loan and the number of jobs the employer said would be saved.

The data was collected by the SBA from the banks that issued the loans.

The agency noted that recipients must still be found eligible for loan forgiveness. “Because a borrower is listed in the data as having a PPP loan does not mean that SBA has determined that the borrower complied with program rules or is eligible to receive a PPP loan and loan forgiveness,” it said. 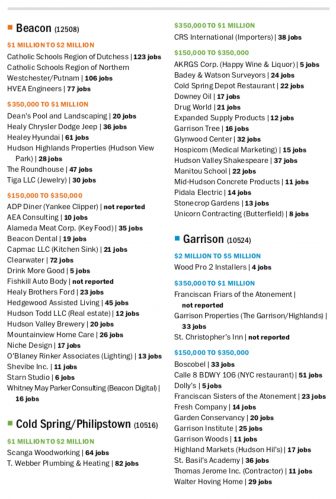 Some information provided by banks to the Small Business Administration regarding the Paycheck Protection Program was incorrect. Wood Pro 2 Installers of Garrison, which the SBA reported received a loan of $2 million to $5 million to preserve four jobs, in fact kept 60 to 70 people on the payroll, said owner Denis Dillon. In addition, a representative for the Franciscan Friars of the Atonement and St. Christopher’s Inn, which were reported to have each received a loan of $350,000 to $1 million, said the organizations applied but decided not to take the funds.

One thought on “Paycheck Program Brings $34 Million+ to Highlands”