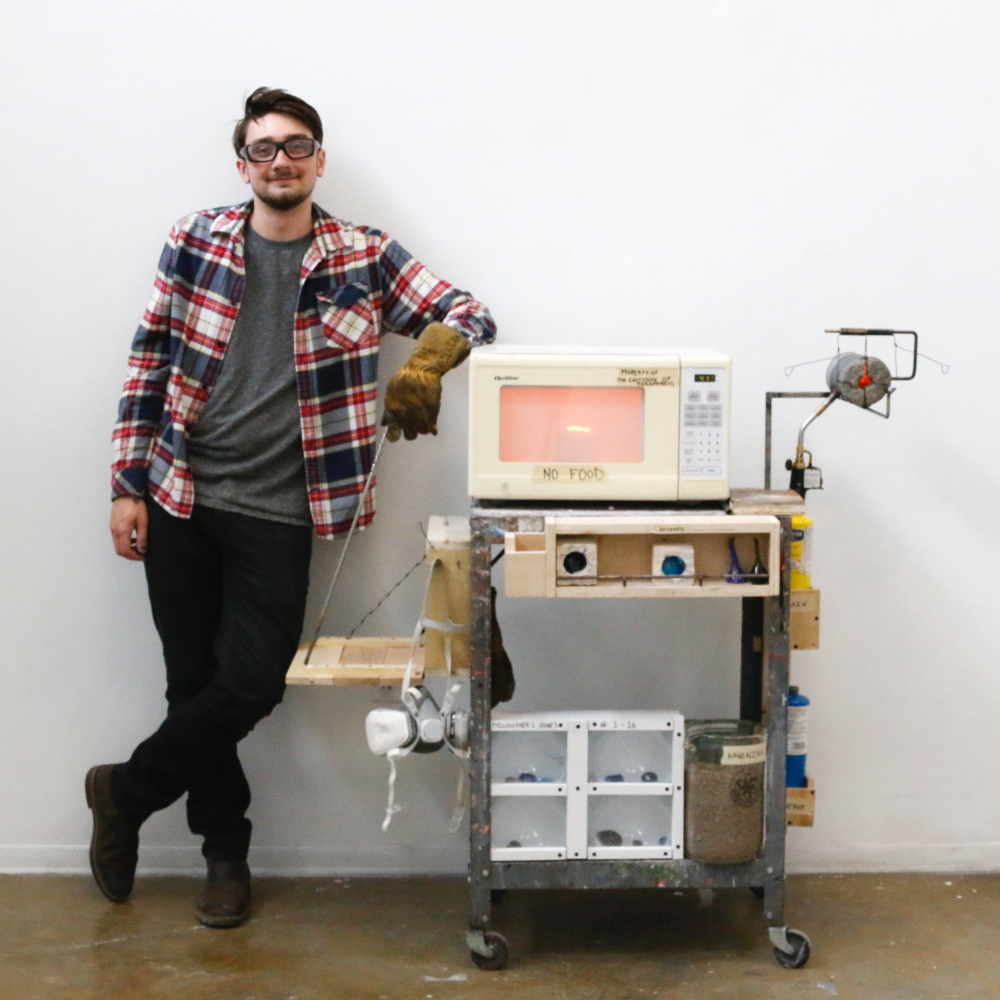 Artist Lukas Milanak says he takes “a mad-scientist approach” to glass- and furniture-making, and it isn’t difficult to see why.

One of his works, “Mobile Alchemy Research Station (M.A.R.S.),” resembles a microwave atop a rolling cart with a tin can attached. But during performances, he demonstrates that the setup is intended to mix and meld various elements in pursuit of the “philosopher’s stone,” a mythological substance that can turn mercury to gold.

The sculpture-turned-laboratory is part of Allegory and Apparatus, an exhibition of Milanak’s work opening alongside painter Daniel Berlin’s Weightless at Beacon Artist Union on Saturday (Sept. 12). Combining traditional techniques like glassblowing with do-it-yourself experiments in chemistry and engineering, the show seems likely to delight and amaze.

Milanak, who will be on hand each Sunday to discuss his artwork, said the show’s unifying theme is the combination of both custom-made and found objects, as well as the deceptive nature of the pieces, such as the question of whether something is a work of art or science experiment.

He describes his work as “taking elements from your environment and cobbling them together to make something useful.”

“A lot of times I’m using found objects to create whimsical sculptures and drawings,” said Milanak. “A lot of times there’s an element of an overlooked phenomenon taking place under the surface.”

Skill is evident in his ability to jerry-rig a glassmaking studio out of a microwave, rolling cart and tin can. But the provocation is that its ostensible “use” is to pursue a fairy tale like the philosopher’s stone.

Another sculpture in the exhibit is “Last Cicada.” The handblown bell jar combines a small robotic arm with guitar-string fingers and a tin can, and juxtaposes science and fantasy, engineering and art, and nature and technology. 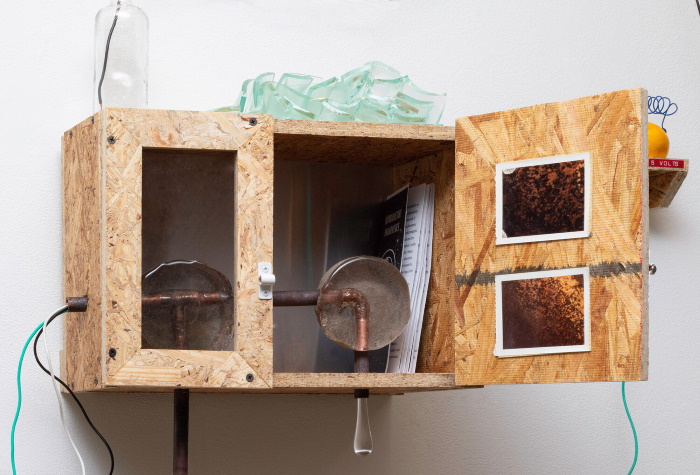 At intervals, the arm rubs its fingers against the ridges of the tin can, producing a cicada-like song. The work’s title and construction suggest that the human detritus from which the piece is constructed will outlive the real cicadas that inspired it — perhaps even contributing to their extinction.

Milanak’s approach to art follows an equally unique journey. After studying glassmaking and sculpture at Temple University in Philadelphia, he worked aboard the GlassBarge. Launched by the Corning Museum of Glass in the summer of 2018, the barge sailed the Hudson River and Erie Canal, demonstrating glassblowing during stops at riverside communities between Brooklyn and Buffalo.

“That’s how I got into the Hudson Valley,” said Milanak. “I was coming up the Hudson River on a barge and kind of just fell in love with the area and decided to bring my craft here.”

In September 2018, Milanak got a job as an assistant at Niche, the Beacon lighting and glassware company. After moving from Philadelphia, he also set up his own studio in Beacon. 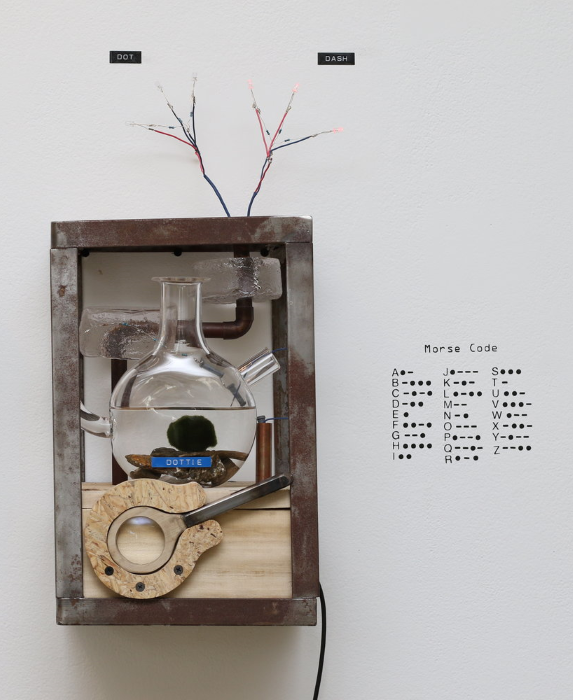 “Interactions in the Electromagnetic Fields of Plants and Humans”

Milanak describes his upcoming show as a kind of coincidental second-anniversary celebration of his move. The exhibit is all the more coincidental because he was unsure whether it would actually take place after being canceled multiple times because of the ongoing COVID-19 pandemic.

The show will be BAU’s second since the state allowed museums to reopen in July. Considering Milanak’s “mad scientist” approach to art, the masks visitors are required to wear may have been in order even if there was no pandemic.

“If you come to my show, you can expect to see robots, light shows and a little bit of backyard chemistry all combined into this package,” he said.

Allegory and Apparatus opens at BAU, 506 Main St., on Saturday (Sept. 12) from noon to 8 p.m. The show will run each Saturday and Sunday, from 12 to 6 p.m., through Oct. 4. An online Instagram performance will be broadcast at instagram.com/lukaslabs on Sept. 20 at 6 p.m.