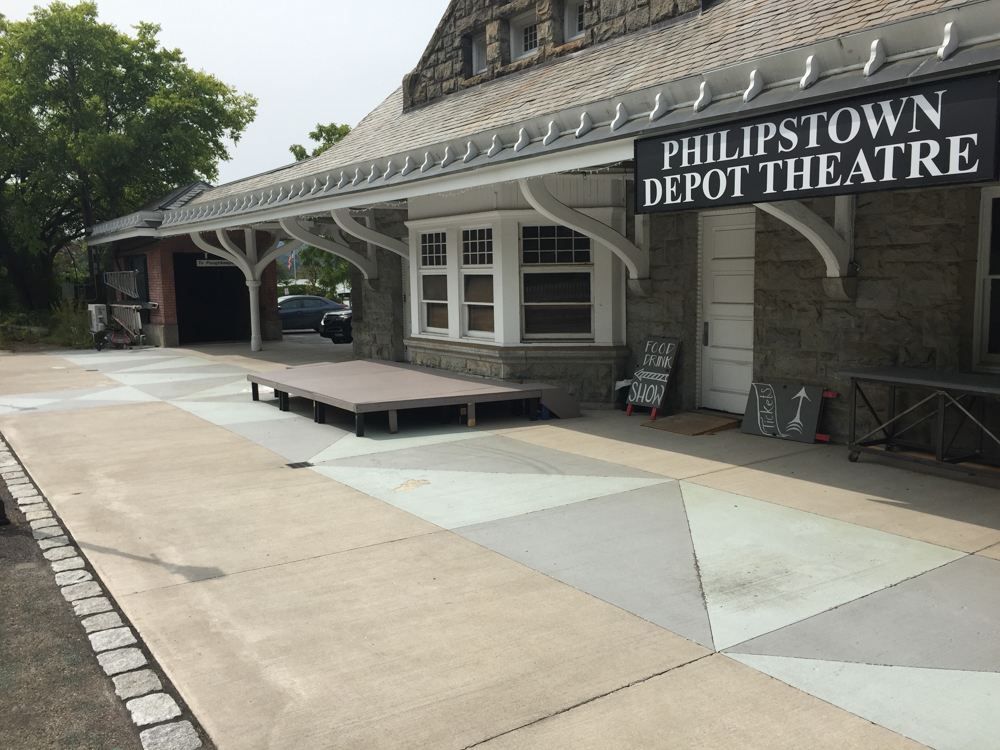 The theater built a small stage on its renovated plaza for outdoor shows. (Photo by C. Rowe)

When the Philipstown Depot Theatre in Garrison last year repaired the concrete and improved drainage of the plaza between the former train station and the Metro-North tracks, it hoped to make the area safer and more welcoming to audience members waiting outside.

Now, with indoor performances suspended because of the pandemic, the theater plans to use the plaza as a stage for an audience of up to 36 spectators.

“The night we had to close [on March 13] was the night before a Night Train Storytelling event,” recalls the Depot’s executive director, Amy Dul. “We made the decision to close, then we went right into ‘What can we do?’”

Twice a week, the theater posted videos to YouTube that it called Remotely Depot. It held a virtual benefit and moved its ongoing documentary series, Depot Docs, online. It held two summer camps online. The state restrictions that prevented more than 50 people to gather in one place “led us to thinking more along the lines of an intimate event on the patio,” Dul says. “Storytelling came to mind.”

The theater will return to live performances where it left off, with two evenings of Night Train Storytelling on Oct. 3 and Oct. 17, both at 6:30 p.m. Joe Charnitski, a two-time Moth Radio Hour StorySLAM winner, will host and the storytellers will include essayist and Moth veteran Bridget O’Neill and locals Jean Huang (Beacon), Karen Kapoor (Cold Spring) and Samantha Spoto (Highland). The evening will also feature music by Ned Rauch and Liz Bisbee Rauch.

To make the plaza compliant with COVID-19 guidelines, Dul says the Depot staff adapted protocols established by the Actors’ Equity Association, such as social distancing and requiring audience members, staff and crew to wear masks.

“We decided 36 seats is what we could do,” Dul says. “We’ll serve hot cider and make it all festive and intimate — a nice way to ease back into live performances.”

The theater also plans an outdoor reading on Oct. 10 of the play My Name Is Rachel Corrie, which was created from the writings of an American activist who was killed in Gaza in 2003 as she was trying to prevent the demolition of a Palestinian home.

The play was edited by Alan Rickman and Katharine Viner and is usually performed by a single actor. In this case, it will be read by a group, including Tess Dul, Faith Jones, Freya Wood-Gallagher and Phoebe Bokhour, under the direction of Christine Bokhour.

On Oct. 24, a modern dance workshop and performance, All Aboard, will take place at nearby Garrison’s Landing (where the ground is softer). Conducted and performed by Erin Jennings and Marie Carstens, it will look at moments of local history dating from the 1890s, when the Landing Train Station (now the Depot Theatre) was new, through the present. The piece begins with a re-creation of a circa-1896 Sailors’ Hornpipe Dance by Carlos Fittante.

The performance, which will be filmed and shown online in November, along with several other pieces, was created with a grant from the Putnam Arts Council.

The Philipstown Depot Theatre is located at 10 Garrison’s Landing. Tickets are $15 at philipstowndepottheatre.org/tickets.