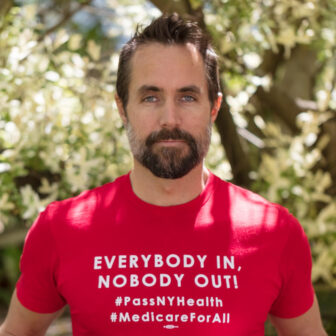 What is the New York Health Act?

It’s a bill before the Legislature that would guarantee comprehensive health care to every resident and full-time worker in the state. It would cover primary and specialty care, as well as mental and reproductive health, dental, vision, hearing, prescriptions and long-term care. It would operate as a single-payer system, with no network restrictions, no premiums and no fees at the point of service.

How would it differ from the health insurance marketplace?

It would be infinitely simpler. The system we have now is a mix of hundreds of public and private insurance plans, each of which has its own network and terms. Under the Health Act, everyone would be covered by the same comprehensive plan. Funding would come through money that the state gets from the federal government for Medicaid, Medicare and other programs, and a progressive tax on income. Right now, I pay the same for a given health care plan that a billionaire would. Under the Health Act, your contribution would be based on your ability to pay.

It sounds too good to be true.

That’s a natural reaction because we’ve lived under this dysfunctional system for so long. Almost every developed country in the world covers its residents better than we do, and more cheaply. Medicare is the closest thing that we have to a single-payer system. It runs more efficiently than the private system, with administrative costs that are a fraction of the insurance industry’s. Two large-scale studies concluded that the New York Health Act would cover more people better than we do now, cost less for individuals and save the state billions of dollars each year. In addition to lower administrative costs, we would be bargaining collectively for better prices.

Why are you passionate about this?

My mother had many health problems at the end of her life and was constantly trying to figure out whether she was covered for this procedure or that. I developed a deep sense of the injustice of our system. I wanted to work toward change that I thought was possible in the midst of the chaos we have in this country. If we could get this passed, it would impact every single New Yorker. We could become a model for the rest of the country. I’m also a small-business owner, and for many years, at the beginning of my career, I didn’t have health insurance. I was lucky because I didn’t get seriously ill.

The bill was introduced in the Assembly in 1992 and has been reintroduced many times since. Why do you think this year will be any different?

It’s picked up steam in recent years. It’s passed the Assembly by large margins four times and last year was one vote shy of a majority in the Senate. A lot of proponents of the Act were elected in 2020, so we have people coming in who want to see it get done. If you look at the bigger picture, the pandemic has underscored the need for fundamental change in the way we administer health care. A lot of the inefficiencies in our system have been multiplied, especially in communities of color and disadvantaged areas. New York is facing a big budget crunch and the Health Act could become attractive to municipalities unable to meet their budgets in coming years.