When Bevis Longstreth becomes absorbed in a topic, he has a tendency to immerse himself in research.

“I suppose it’s a lingering habit from being a lawyer,” he says. “I didn’t major in history, but I wish I had.” 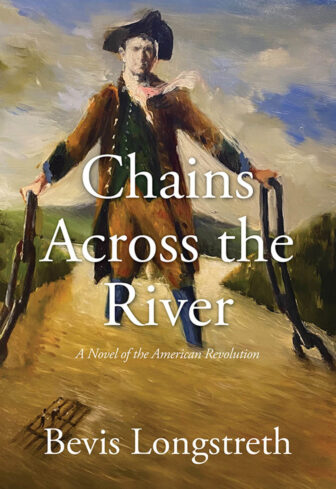 The Garrison resident has, in his retirement, published four novels, each an examination of a period of history. “The novel format gives you a freedom that you don’t have in a history book: to make up facts when they aren’t otherwise available,” he says. “As far as facts are available, I’ve used them, then woven the novel around those facts.”

His first attempt at a novel was never published, he notes. It was to be centered on beekeepers. “I signed up to attend a beekeepers’ convention in Texas, thinking I would pick up all kinds of wonderful knowledge about this breed of human beings,” recalls Longstreth, who is a member of the board of directors of Highlands Current Inc., which publishes this newspaper. “I discovered that was not the case.”

Instead, Longstreth’s novels have addressed no less than the dawn of civilization (Spindle and Bow), the Persian empire (Return of the Shade), the Great Depression (Boats Against the Current) and, in the latest, Chains Across the Hudson, the American Revolution.

Longstreth will discuss the latter at 4 p.m. on Sunday (April 25), in a virtual event hosted by the Desmond-Fish Public Library in Garrison. Register at bit.ly/chains3-25.

Chains centers on Thomas Machin, a British soldier who deserted to join the patriots. Noting his engineering skill and practical bent, Gen. George Washington ordered Machin to the Hudson River to imagine, design and install obstructions to block the British armada that was gathering in New York Harbor.

It was Machin who installed a chain across the river at Fort Montgomery and, when the British overran the fort and cut the chain, another at West Point.

“There was so little covered about this man and what he did,” Longstreth says. “It all happened right here, so it felt for me a little like Melville looking at Moby Dick from the bow of the Pequod.”

Longstreth conducted research at the New-York Historical Society, the New York Public Library and regional museums, where he found the librarians “verge on being grateful that you’re bothering them!” He also relied on Chaining the Hudson, by Lincoln Diamant.

Nevertheless, “at some point, you have to stop” the research and start writing. “In the case of Chains, most of what I said about Machin is accurate except his love life, which I put in the book to flesh it out — it is a novel.”

“The most puzzling and remarkable thing about the man was he created a fiction about himself,” denying he was a deserter until the end of his life. “It wasn’t a helpful fiction to him, but it was to me. It’s a character flaw that’s useful in my novel, because I try to explain it.”

Chains Across the River can be purchased online in hardcover or digital formats at Amazon, Barnes and Noble and Walmart.