The Hudson Valley Shakespeare Festival, which hopes to move next year from Boscobel to the current site of The Garrison golf course, presented its latest plans to the Philipstown Planning Board on July 15, with the most notable revision being the addition of a consultant’s traffic study.

Based on his analysis and projections, John Canning, a traffic engineer hired by HVSF, proposed that a signal be installed at the intersection of Snake Hill/Travis Corners and Route 9 and that a left-turn lane be added farther north on Route 9 at the proposed main entrance of the site. The signal and left-turn lane would require the approval of the state Department of Transportation. Canning also recommended a right-turn lane be added to eastbound Snake Hill Road.

If a signal were not approved — although Canning said projected traffic volumes would allow for one — police officers would probably be required to direct traffic a few weekend nights each year, based on HVSF’s projection that simultaneous indoor and outdoor performances would occur on about 28 days over the summer months. 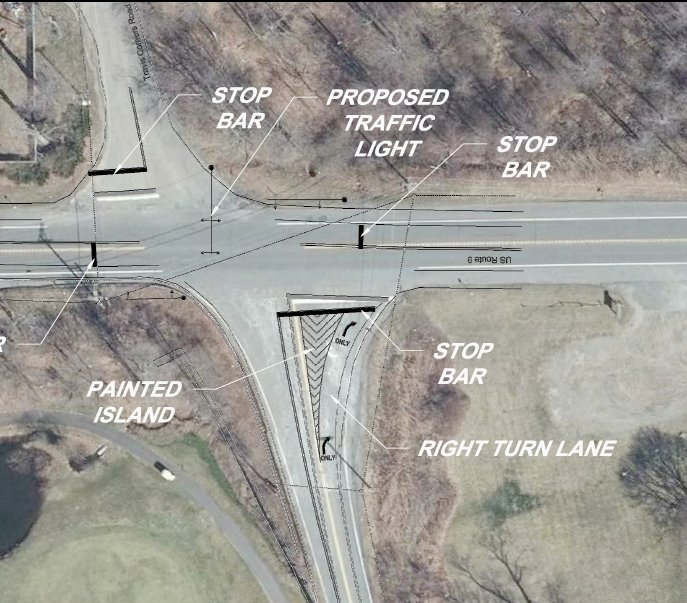 A photo from the HVSF plan shows the location of a proposed signal and turn lane at the closest intersection to the site.

Once the seven-member Planning Board completes its state-mandated environmental assessment, it will hold a public hearing, although the Town Board must change the zoning on the site to allow for performances. The land was donated to the festival by The Garrison’s owner, Chris Davis, who plans to close the course later this year. The festival has presented its productions on the grounds of Boscobel in Garrison for more than 30 years.

If it can get approvals from the town, HVSF said that in May 2022 it would install a temporary tent at The Garrison for the summer season; repair the entry roads; install a driveway and stream crossing from Snake Hill Road; upgrade the parking lots; add lighting; and install basic landscaping.

With further permits, in 2023 and 2024 it would construct a permanent tent with slightly fewer seats than the Boscobel tent, which has 535; a 1,200-square-foot box office and welcome center; and a 4,000-square-foot “back of house” building with dressing rooms for the actors. It also plans to add a 20-room hotel.

At the Planning Board’s monthly meeting in June, its chair, Neal Zuckerman, noted the high level of interest in the project, especially from neighbors, but said anyone who wrote or emailed the board should not expect a response. He said members would not “engage in debate” with individuals about the “merits or demerits” of the project. “We are reading, but we are not responding,” he said.

Zuckerman noted that one item of contention with some residents was Item 11 of the review, which assesses the potential impact of the project on “open space and recreation,” because the board decided that the project would not “result in loss of recreational opportunities or a reduction of an open space resource.”

“This item continually gets questions,” Zuckerman said. “Mr. Davis donated significant land to be new and truly fallow open space. It’s also not a ‘loss in recreational opportunity.’ You could say it’s an equal change, at a minimum. Members of the public are very squeaky on this topic.”

Before the July 15 meeting, their first in-person since the pandemic shutdown began, each member of the board was presented by the HVSF team with a binder of material to review, including Canning’s traffic analysis. HVSF said it is waiting on some reports, such as an assessment of the noise generated by performances.

The HVSF team also told the Planning Board:

■ A soil analysis suggested the construction would not require blasting or pile driving.

■ A report commissioned by HVSF found that the project would disturb about 39 acres, but that nearly 100 percent had previously been disturbed because it’s mostly fairways with “little habitat value.” HVSF said it expected to remove 172 trees and plant 250.

■ HVSF added sightline profiles to its packet to demonstrate the effect of its proposed lighting plan after dark.

■ Team members met with officials from the Cold Spring and Garrison fire departments in March to review the site plan, which led to the redesign of an interior road to eliminate a difficult turn, among other revisions.

The Planning Board will resume its review of the third and final section of the environmental assessment form at a meeting scheduled for Sept. 16.