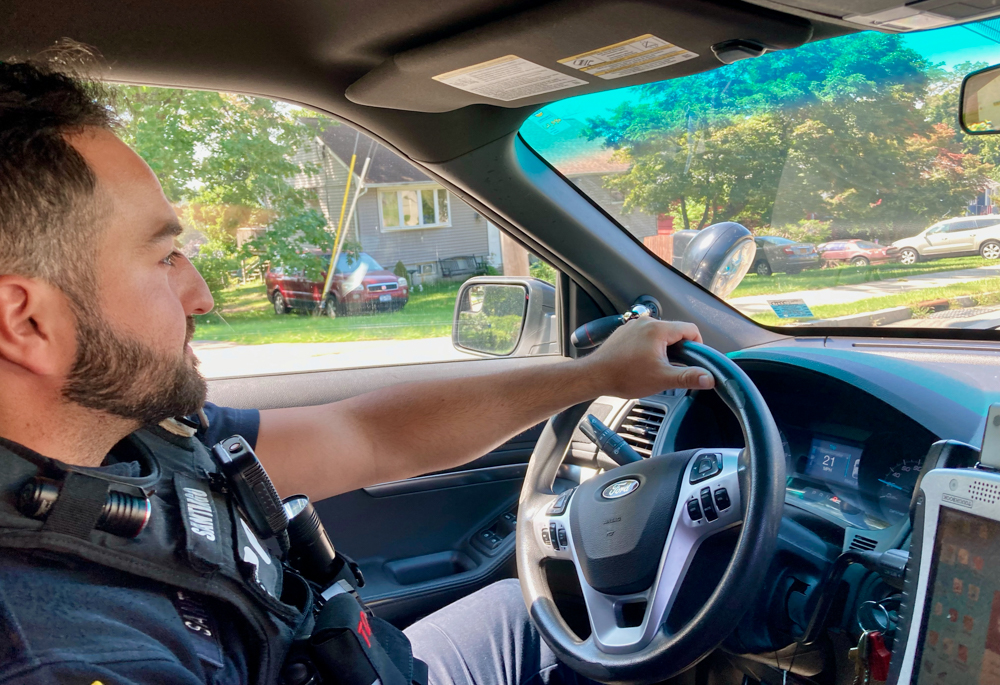 Chief Sands Frost called me a few weeks ago to ask if I wanted to spend an afternoon at the Beacon Police Department, going on a “ride along” on a patrol and talking to officers about their day-to-day duties.

Last week I took him up on his offer.

A few days before, The Current asked on social media if readers had any questions for the chief or other officers. We received several variations of:

(1) Why aren’t there any foot patrols on Main Street, especially on the weekends?
(2) Speeding is a huge problem on [fill-in-the-blank] Street. Can you help?

According to Frost, the answer to both is lack of staff. The Police Department is budgeted for 37 officers, including the chief and detectives, but there are only 31 officers on the force now, one of whom is currently restricted to light duty. On Monday (Aug. 16), the City Council shifted $195,000 that had been budgeted for salaries to overtime pay for the officers working extra hours.

Shifts typically have three patrol officers and a supervisor, Frost explained, which isn’t ideal but has become the norm. “That’s all we’ve got right now,” he said.

Call volume then determines how many officers are available to walk Main Street or sit at an intersection watching for speeders. If you see an officer on Main Street, he said, that same officer will be the one who responds to a domestic disturbance or car crash or anything else that comes up.

We all heard calls to “defund the police” last year after George Floyd was murdered by an officer in Minnesota, so it’s interesting to also hear complaints that there aren’t enough officers to do what’s needed on the ground.

We had several readers ask why officers aren’t friendlier, as well. One person wrote, “I’d be less nervous around the police if they would talk to me.”

This one isn’t as simple to answer, Frost said, because it’s hard to account for every situation. If an officer walks down Main, for instance, he or she can’t make eye contact and nod at everyone.

“It’s enlightening to hear that question,” said Lt. Tom Figlia. “It goes two ways, because you don’t always know who wants to talk to you.”

I had my own question for the officers: Why’d you decide to become a cop?

Like everyone else, I’ve seen the tension surrounding the role and power of the police escalate over the last 18 months. It was uncomfortable hearing some of the stories people told last year during community forums on law enforcement.

It’s clear there’s a lot of work to be done to repair or even establish relationships with segments of the community. Maybe it would help, I thought, if we could humanize officers, and learn what makes them tick.

Jason Johnson, a detective sergeant who joined the force in 2004, often speaks to reporters as a representative for the department. He says he grew up idolizing his father, John Johnson, who was the Beacon chief from 1989 until he retired in 1994. “I admired the satisfaction I saw him get out of helping people,” Johnson said.

Figlia told me there had been domestic violence, at times involving a gun, in his home when he was growing up. Going to the police “was the intervention that we needed to bring a sense of safety into my household,” he said.

I also spoke with the department’s domestic violence advocate, who is stationed three days a week in Beacon through an arrangement with Family Services, a Poughkeepsie-based agency. The woman, who asked not to be named because of the nature of her job, and Lashaveous Dicker, a behavioral health specialist placed with the department through a partnership with Mental Health America of Dutchess County, work with people the police encounter who are suffering from abuse or addiction.

I wrote last year about the push to include funding in the budget to add the behavioral health position as a way of “reimagining” how law enforcement responds to certain calls — the sort of change that for some people falls under what they mean by “defund the police.” But I had not known that the department already had a domestic violence/sexual assault advocate — and has since 2009.

At the end of the afternoon, after signing a waiver and donning a bulletproof vest (both department policy), I climbed into the passenger seat of a marked SUV with Officer Silverio Santiago. As he drove, I asked him how he thought residents perceived the police.

“Not everybody’s going to like you,” he said. “But whether they like me or not, I still have a job to do. I’m going to treat you with respect and try to resolve the situation. I respect that you may have a difference of opinion with me.”

As we drove past the basketball courts at South Avenue Park, Santiago told me that he sometimes stops to watch the summer youth league games.

“I go to Loopers Plaza [across the street] because my favorite pizza place is there and I’ve run into a couple of coaches who were very open in asking us to come by and hang out with the kids,” he explained. “They want us to let them know that just because we’re there, we’re not looking for something. I see parents who I know. They appreciate us showing support for the community.”

After we’d driven for a while, Santiago was kind enough to swing by my house to pick up my 9-year-old son, Lucas, so he could ride in the car, too. We drove around with him for a few more minutes and then headed home, where the officer said he would show Lucas the CB radio and other equipment up front.

As we pulled up, a Black girl, maybe 13 or 14 years old, was walking by on the sidewalk. Santiago waved hello from inside the vehicle, but I’m not sure she saw him.

I opened the passenger door and got out to get Lucas. For a split second, my eyes met hers.

“Are … are you stopping me?” she asked, slowly, as she removed her earbuds.

She was nearly at the end of the block before it hit me. I was wearing a bulletproof vest and sunglasses. I looked like a cop.