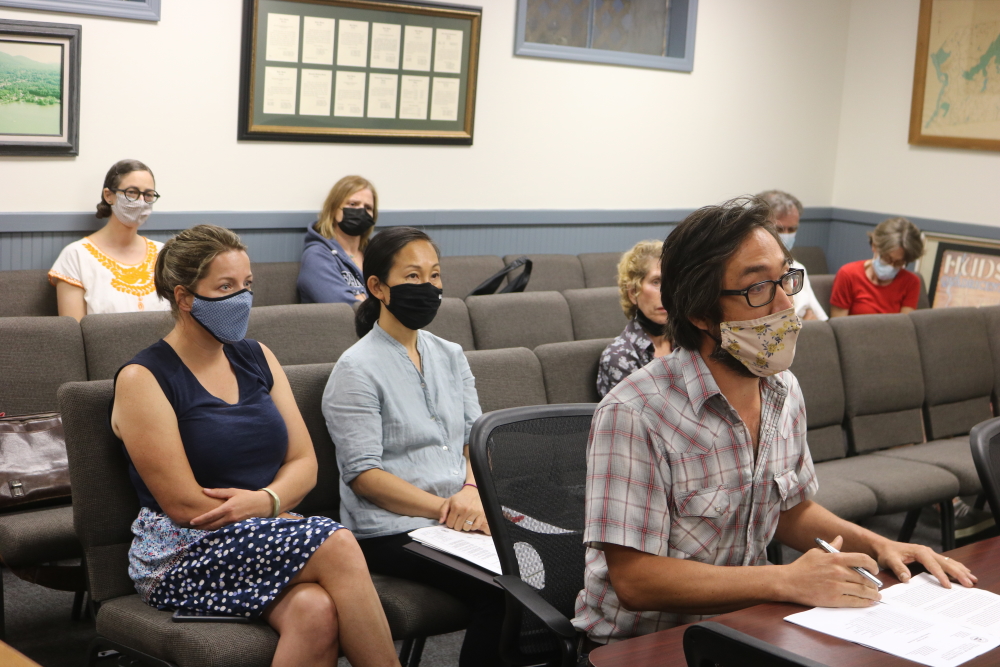 Jason Angell discusses the "Share the Growth" proposal with the Cold Spring Village Board during its meeting on Aug. 24. (Photo by M. Turton)

Jason Angell, recently appointed to the Philipstown Town Board, visited the Cold Spring Village Board on Tuesday (Aug. 24) to promote a campaign to ask Putnam County to share part of the sales tax revenue it collects from local businesses.

The “Share the Growth” proposal that Angell is advocating would have Putnam share 50 percent of any annual rise in sales tax revenue.

Angell pointed out that in 2018, the 46 counties that share sales tax revenue added $1.9 billion to the coffers of local municipalities, or 23 percent of the sales tax they collected. He said that William Carlin, the county finance commissioner, recently said he expects Putnam will experience about a 90 percent increase over in sales tax collected compared to 2019.

Under the proposal, the county “would only be sharing growth in sales tax,” Angell said. “Their budget would be kept whole; they could keep providing the services they’re supposed to provide.”

He said that sales tax revenue should continue to rise for the county because in 2019 the state allowed tax to be collected from internet sales, including from Amazon. The county is “now sitting on a historic fund surplus; they’ve never had so much leftover money.”

Angell said he hopes to build a municipal coalition that will take the proposal to the county. “We’re trying to unify all the towns and villages in the county so we can speak in once voice, regardless if [the municipality leadership] is Republican or Democrat,” he said.

Philipstown and Nelsonville have already endorsed the plan. Mayor Dave Merandy said he would support the proposal. “I don’t see why we wouldn’t,” he said.

Merandy hinted, perhaps tongue-in-cheek, that another strategy could ensure tax sharing: Counties that don’t have a city, such as Putnam, do not share sales tax. Two villages in the state have become cities in order to force tax sharing, he noted, adding that population and geographic size is irrelevant.

The idea of the “City of Cold Spring” drew chuckles. The board will consider a resolution supporting Angell’s proposal at its next meeting.

Little progress was made in resolving issues around a wine bar and café proposed for 15 Main St.

Construction is all but complete but members of the Cold Spring Village Board raised questions on Aug. 24 when the project’s architect asked for a temporary certificate of occupancy that would allow the business to open. The board declined the request, citing discrepancies between what has been constructed and what was approved by the Planning Board.

The questions mainly involved a handicapped-accessible ramp that encroaches on village-owned property. The project has been before the Village Board, Planning Board and Historic District Review Board since early 2019. Juhee Lee-Hartford of River Architects attended the Aug. 24 meeting along with the building’s owner, Laura Bergman.

While Mayor Dave Merandy has been highly critical of the way the project has been handled, he said that “if we can find a way to help Laura out, and get her [into the building] temporarily, I’ll do everything I can to do that.”

But he added that the project’s issues still need to be addressed, either by the village selling property to Bergman, an approach he opposes, or by the architect approaching New York State to request a variance for the ramp, allowing it to be constructed at a slightly steeper pitch than is normally allowed under the Americans with Disabilities Act (ADA).

Merandy said he would discuss the outstanding issues with Planning Board Chair Matt Francisco and Charlotte Mountain, the village building inspector.

On Aug. 26, Lee-Hartford appeared before the Planning Board, which told her she needed to submit an updated, ADA-compliant site plan and parking table. It suggested she consider a lift and/or pursue a variance for the ramp. On Sept. 2, Lee-Hartford said she would pursue the variance because an electric lift was not suitable for a flood zone.

At the Planning Board meeting, Lee-Hartford said her staff had assumed all of the village-owned property in front of the building could be incorporated into the design. However, the village had sold Bergman only enough property to allow construction of steps as an entrance.

Lee-Hartford said that at the next meeting of the Village Board she would present two proposals for completing the wine bar that don’t require purchase of village property.

■ Merandy reported that plans are “moving forward cautiously” for Community Day on Sept. 4 as local officials continue to monitor COVID-19. He said in response to concerns raised by county health officials, face painting won’t be offered and children’s jump houses will not have roofs. “Those were their main concerns,” he said. “I feel we should move ahead.”

■ Ruthanne Cullinan Barr, who chairs the Recreation Commission, reported that it will draft a report evaluating the pros and cons of large, ticketed events at Mayor’s Park, along with recommendations for smaller events in the park’s pavilion. Commission member Trevor Knight is drafting a survey of residents as part of an initiative to increase recreational use of Cold Spring parks.

■ The board approved a request from Larry Burke, the officer-in-charge of the Cold Spring Police Department, to hire Officer Matthew Jackson.

■ Kyle Van Tassel was hired as a laborer for the Highway Department. The department, which normally has four workers, remains one person short, pending a decision by the board regarding privatizing garbage collection.

■ The board approved a reduction in water and sewer rents for American Legion Post 275.

■ The sloop Clearwater will dock at Cold Spring Sept. 1 to 3.