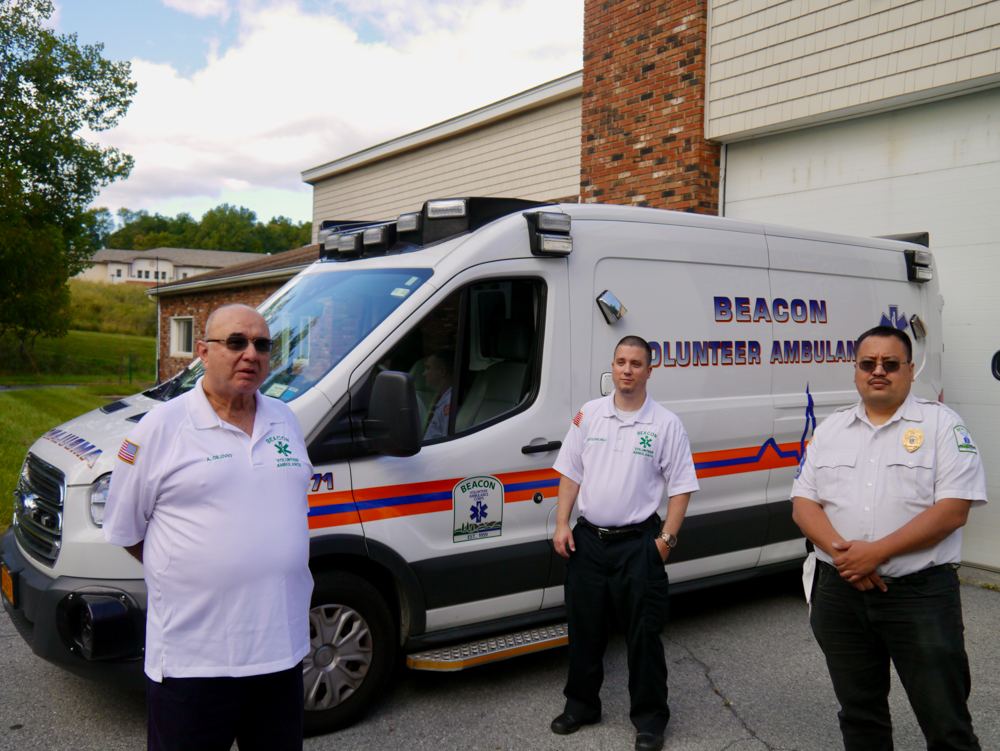 Officials with the Beacon Volunteer Ambulance Corps are concerned it may not survive if the city contracts with for-profit companies. Shown are President Andy DiLuvio, Chief Nick Scarchilli and Assistant Chief Antony Tseng. See Page 23. (Photo by Jeff Simms)

Volunteers fear it could mean end to corps

Over the next month, the City Council will discuss how much, if any, of that money will go to the nonprofit Beacon Volunteer Ambulance Corps (BVAC), which has served the city for 63 years.

City Administrator Chris White says a breakdown in the mutual aid system led the city to consider awarding a contract to a private firm. Beacon officials have had discussions with Mobile Life Support Services (MLSS), the Empire State Ambulance Corp. (EMStar) and Ambulanz — the three companies that provide emergency medical service in many Highlands communities.

BVAC is the only volunteer ambulance service operating in the county. Its seven paid employees and 35 volunteers respond to about 235 calls per month.

In Putnam, EMStar provides the county’s service, while the Town of Philipstown relies on two volunteer agencies, the Philipstown Volunteer Ambulance Corps and the Garrison Volunteer Corps. A major difference, however, between Beacon’s use of a volunteer company and the Philipstown arrangement is that the PVAC and GVAC are subsidized by the town — to the tune in 2021 of more than $600,000 combined.

If Beacon goes private, BVAC members say the corps may not survive.

In July, the Town of Wappinger, which has a contract with EMStar, said its ambulances would no longer respond to lower-tier emergency calls in the area covered by BVAC, which includes Beacon and the Glenham, Dutchess Junction and Chelsea fire districts. By the end of the year, the town’s ambulances will be unavailable for routine and supplemental priority calls, as well.

In 2020, Wappinger’s ambulances, which provide advanced life support (ALS) service with a paramedic on board, were dispatched into Beacon’s coverage areas more than 75 times. Halfway through this year, that number had already doubled.

The “rapid escalation of requests for taxpayer-funded resources” has become a “significant concern” to the town, Wappinger Supervisor Richard Thurston wrote in a letter to BVAC in July.

BVAC had a paramedic on board during each call from 2009 to 2016 but now provides only basic life support. The corps estimates that up to 25 percent of the calls in its coverage zone require an ALS response.

“If the city had helped us subsidize that program, maybe it would still be around,” said Antony Tseng, BVAC’s assistant chief.

Soon after, Philipstown, East Fishkill, LaGrange and the Town of Beekman made announcements similar to Wappinger’s.

A major challenge facing BVAC is a lack of personnel. “EMS is not a well-paid job,” said President Andy DiLuvio. “For a long time, it was close to minimum wage, although we’ve managed to bring that up considerably.”

The last year has also seen the cancellation of training courses and an exodus throughout the health care industry. “COVID is scaring people,” he explained. “Nobody is able to get new people.”

A state survey of 900 EMS agencies backs him up: It found more than half of the EMS companies that utilize volunteers were “moderately or severely impaired” by shortages.

Even so, BVAC responders said they’re on the scene within minutes in 95 percent of the “first” calls in the city. However, when second, third and fourth calls come in, they can’t be everywhere at once.

“It’s not because we’re goofing off,” Tseng said. “There are multiple events and our resources don’t match up. When it rains, it pours.”

DiLuvio said that the Beacon corps has asked the city to help pay for a second ambulance that would cost about $305,000 annually.

On Monday, several volunteers and residents urged the City Council to work with BVAC.

One of them, Ellen Pearson, said the company has been “invaluable,” dating as far back as 1966, when her parents were hit by a drunk driver. BVAC volunteers not only transported her parents to Highland Hospital but checked in for months afterward and donated blood.

“They had a personal investment in community,” which “builds a stronger, cohesive” city, she said.