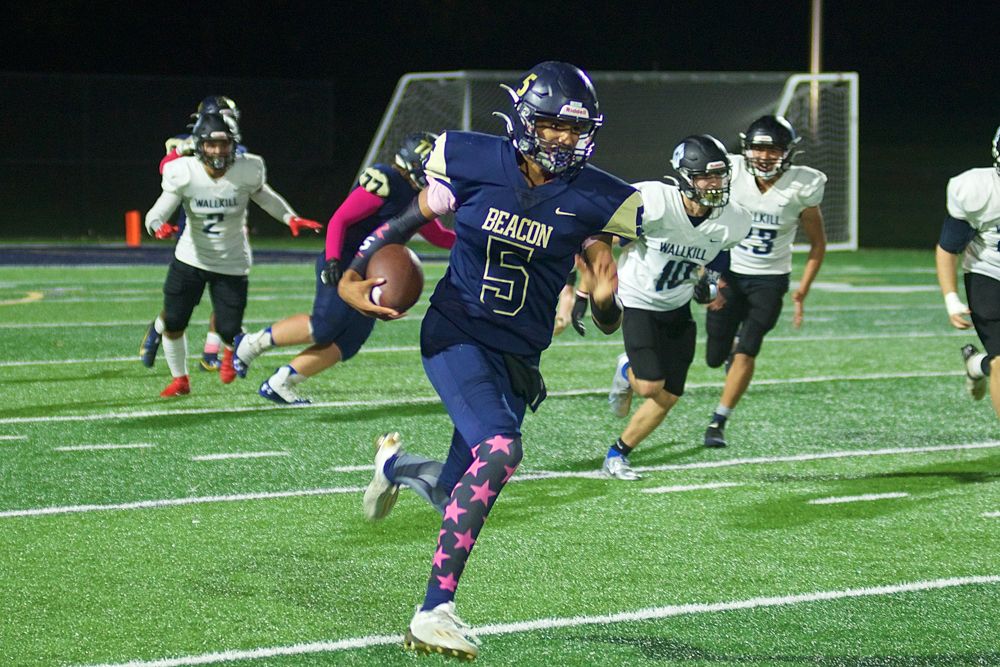 A third-quarter, three-yard touchdown run by quarterback Ryan Van Tassel and a two-point conversion run by Evan Giachinta provided the margin of victory for the Haldane High School football team on Oct. 16 in a thriller, with the Blue Devils coming from behind to edge visiting Valhalla, 28-27.

The game was tied, 20-20, at halftime. The Vikings scored first in the third quarter on a 17-yard run, with the point-after kick giving the visitors a 27-20 lead.

But the Blue Devils put together a drive of their own. 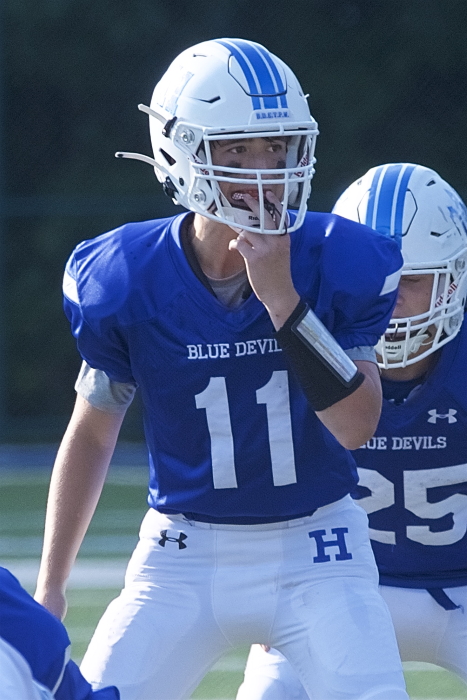 A Valhalla player was hurt on Van Tassel’s touchdown run, resulting in a delay of about 30 minutes. But when play resumed, the Blue Devils didn’t hesitate in going for the two-point conversion and the lead.

Valhalla put together a drive that put them inside the Haldane 10-yard line with 3:30 to play, but the Haldane defense twice made stops inside the five, then blocked a potential go-ahead field goal with three minutes remaining.

“That was a huge win for the program, a tough battle, and we found a way,” said Coach Ryan McConville. “Our defense bent, but didn’t break, and blocking that field goal was huge. Giachinta, Nate Stickle, Dylan Rucker, Jack Hartman, Will Etta, Dominic Lyons-Davis, Jake Mason, Erik Stubblefield and Jesse Osterfeld — that whole defensive group stepped up big-time for us. Mike Murray also had a fumble recovery and his first two varsity catches.”

Valhalla scored in the first quarter on a 32-yard interception return, but Van Tassel shook it off and responded by connecting with Tommy Tucker on an 85-yard pass that made it 7-6.

The Blue Devils scored twice in the second quarter, including on a 16-yard pass from Van Tassel to Ryan Irwin, followed by an Irwin run for the two-point conversion that tied the game.

Van Tassel completed 9-of-19 attempts for 190 yards and three touchdowns. Giachinta finished with 51 yards and a TD rushing on 14 carries.

Haldane (5-1), which the New York State Sportswriters Association (NYSSA) this week ranked No. 13 among Class D schools, has two games remaining before the team advances to the Class D sectional title game against Tuckahoe (5-1), which is ranked No. 9. The Blue Devils are scheduled to travel to Blind Brook on Saturday (Oct. 23) for a 1:30 p.m. kickoff.

Coming off their worst game of the season, (a 28-3 loss to Wallkill), Beacon High School hosted Monticello on Oct. 15 for homecoming and cruised to a 35-0 victory over the Panthers (0-6).

Quarterback Jason Komisar ran for 137 yards and three touchdowns on seven carries, and completed all three of his pass attempts for 71 yards. Isaac Hansen rushed 13 times for 61 yards and a touchdown. Ahmir Bell had six carries for 75 yards.

On defense, Hansen blocked a punt; Aaron Pegues came up with two sacks; Louis DelBianco blocked a punt and recovered two fumbles; and Jorge Rodriguez had an interception.

“Our offensive and defensive lines both played great,” said Coach Jim Phelan. “That’s the strength of our team. Our seniors have been helping the younger guys come along, and our wide receiver [Cody Shields] did a great job blocking.”

He also cited the play of his two senior running backs, Hansen and Bell. “They didn’t get a lot of carries, but they’re both out there all the time,” he said. “And Jason had a great game. That was everything we would expect from a senior quarterback.”

The Bulldogs (4-1), who received an honorable mention this week in the NYSSA rankings, are scheduled to travel to Minisink (4-2) tonight (Oct. 22). A win should secure Beacon a No. 3 seed in the Section IX, Class A tournament. Beacon is set to host a first-round playoff game on Oct. 29 at 7 p.m.

On Monday (Oct. 18) in Cold Spring, Haldane defeated Poughkeepsie, 3-1, on Senior Night. Meghan Tomann led the Blue Devils in assists with 20, while Megan Farrell added 18 digs and Jill Weinphal had 13.

“In the third set we tried to have a little fun by letting players play different positions,” said Coach Kristina Roling. “Unfortunately, it didn’t work out for us, but we finished strong in the fourth set.”

Haldane also defeated Peekskill, 3-0, on Oct. 16 at home. Tomann had 12 assists and Farrell had 13 digs and eight aces. The Blue Devils had the most serving aces of the season, Roling said. “The players worked as a team and got a nice win.” 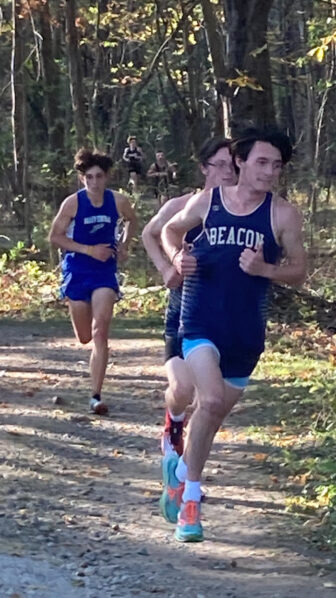 Evan LaBelle took third for Beacon at a cross-country meet on Oct. 20; the teammate immediately behind him, Henry Reinke, finished second.

“Our final dual meet of the year was a nice tuneup for us with the full squad running,” said Coach Jim Henry. The team will compete in the county championships on Oct. 27 and sectionals on Nov. 3.

Beacon did not have enough female runners for team scoring but Ella Cason finished second and Rachel Thorne was fourth. “Cason and Thorne continue to run consistently well and have improved to the point that they are serious contenders to qualify for states,” Henry said. “I expect some late-season speed work will help.”

Haldane closed the regular season with victories over Pawling, 3-0, and Putnam Valley, 5-1, to extend its winning streak to six going into the sectional tournament.

On Oct. 13 at Pawling, the Blue Devils got two goals from Ryan Eng-Wong and one from Max Westphal. Ronan Kiter had four saves in goal. At home on Oct. 15 against Putnam Valley, Matt Silhavy and Westphal each had two goals and Eng-Wong had one. Kiter made five saves.

“This team is special,” said Coach Ahmed Dwidar. “The boys are playing with a lot of confidence going into sectional play, which is a new season for us. Our goal is to bring back a title.” Haldane last won the section in 2013.

Beacon blanked Cornwall, 3-0, on Tuesday (Oct. 19) behind two goals from Andre Alzate and one from Miguel Ruiz. On Wednesday, the Bulldogs closed out Monticello, 6-0, with junior varsity call-up Brody Timm notching a hat trick in his varsity debut. Ruiz, Jack Philipbar and Chase Green also scored.

Coach Craig Seaman noted that the team has outscored opponents 61-7 through 15 games. “The key for us is maintaining focus, and playing our best soccer during the playoffs,” which open Saturday at home, he said.

The Beacon High School girls’ soccer team needed a win or tie on Wednesday (Oct. 20) at home to advance to the Section IX playoffs. Unfortunately, they faced a tough Goshen team that led, 1-0, at halftime and eventually won, 2-0.

Beacon had some opportunities to score early, but soon play stayed mostly in Beacon’s defensive end. The Bulldogs ended the season at 6-7-3 and will lose two seniors — Maddie Bobnick and Claire Derrenbacher — to graduation. 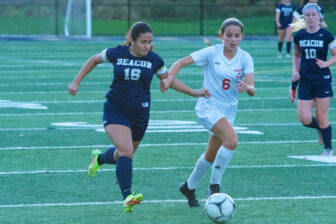 Injuries also did not help this season. Early in the Goshen game, the team lost Emma Campagiorni, whom Coach Hugo Alzate called “the heart of our defense.” Last week it also lost Kasey Senior to injury.

“We had to reshuffle,” said Alzate. “We were scrambling to find players in the middle of the field. Given all that, I thought the team played great. Goshen was just too much for us. Plus, it was our third game in three days.” 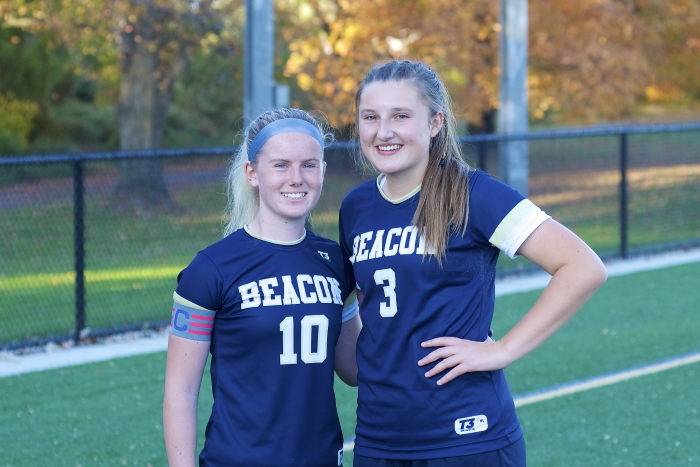 On Monday, the Bulldogs fell at Cornwall, 2-0, and on Tuesday won at Monticello, 6-1, with goals from Devyn Kelly, Chelsea DerBoghossian, Hope Cleveringa, Bobnick, Derrenbacher and Sevana West. On Oct. 15, Beacon lost at home to Minisink Valley, 2-0.

“They’re a little disappointed to miss the playoffs,” Alzate said of his team. “But considering all of our injuries, I’m happy with the way they’ve played,” including a tie against Washingtonville (11-0-1), which is the top seed in the playoffs.