Dennis Church says his photographs are not designed to elicit instantaneous responses. Instead, what appears at first glance to be a busy street corner, or a collision of bright colors, is “organized chaos.” 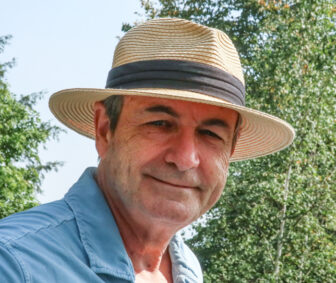 Wading through “the onslaught of the complex visual confusion of the American social landscape” can create anxiety, says the artist, but the photos that result are meant to be “fun and satisfying. I hope the picture is more at peace than the scene it is built from.”

“My quest,” he has written, “is to make photographs that organize this chaos into pictures and photographic essays that demonstrate insight, clarity, irony and humor. Streets, open roads and public places, wherever I live and visit, offer infinite possibilities to observe and improvise on these unique moments.”

A selection of Church’s images are being exhibited, along with paintings by Stanford Kay, at the Garage Gallery in Beacon under the title Color Forms.

Church says he doesn’t have a rigorous selection process for locations but simply shoots as he goes. “I like to make pictures out of nothing, and by that I mean pictures of things very few people would give even a first glance,” he has said. “I make a lot of experimental pictures that change the way I see.

“When I first had those moments, I regretted not having them at other times; now I accept it,” he says. “I look at it as everything out there is a building block, so there’s a metaphor of constructing a picture. Everything is game. Though it sometimes turns into a social commentary, that’s not always intended. I try to let it just flow. When I look at the pictures from that day sometimes I don’t like them because they’re different, unfamiliar and it takes a while to understand and accept them.”

In 2006, after decades shooting on black-and-white film, Church picked up a digital camera. He found that it liberated him, including because he no longer had to buy or process film.

“The more I did it, the better I got at it,” he recalls. “Eventually I realized this was a totally different medium. Some of the differences are technical and subtle. For instance, there are ways of making edges flatter. I’m interested in what things look like when space is flattened.”

As for color, he says he likes to explore “complex, compressed forms in my field of vision, deciphering how they can be abstracted. I’m curious about how color messages, confuses and vibrates, and the ways this is expressed throughout America’s chaotic, sociocultural landscape.”

Church grew up on a farm in Iowa, where the landscape included vast open spaces, along with tractors and other agricultural equipment. His early work included documenting a Wisconsin farm factory. He divides his time between New York City and Florida and his images reflect the different pace of the two locations.

“In New York City, the density of visual information and amount of movement is always there, plus most of the time I’m walking, as opposed to Florida, where often I’m the only person out there walking,” he says. “If I’m walking along, even in Florida, so much visual information is coming in: straight ahead, to the side, it can be just as intense. It’s easier in New York, in a sense, to achieve that energy.”

Church is sometimes classified as a “street photographer,” and at other times as a “documentary photographer.” He sees both as foundational to his work.

“I take pictures of what is going on,” he says. “And I’m also interpreting the way I depict things, the way I see things. In that way, I come straight out of that American documentary tradition. The idea of the abstract: I’m still contemplating what that is. Am I doing something new and different? I’m not sure where I fall on the continuum, but something evolving from that is new to me.

“I’m interested in the space between, also, especially when you make a sequence of pictures: Where does your mind go when you’re between the two? You tend to second-guess yourself. You put up picture A, then picture B, then put the two together and there’s a third picture being made.”

Garage Gallery is on North Elm Street in Beacon, a half block north of Main. (The GPS address is 11 N. Elm; the gallery is across the street.) It is open from 1 to 5 p.m. on Saturdays and Sundays, or by appointment. See garagegallery.com. Color Forms continues through Nov. 28.