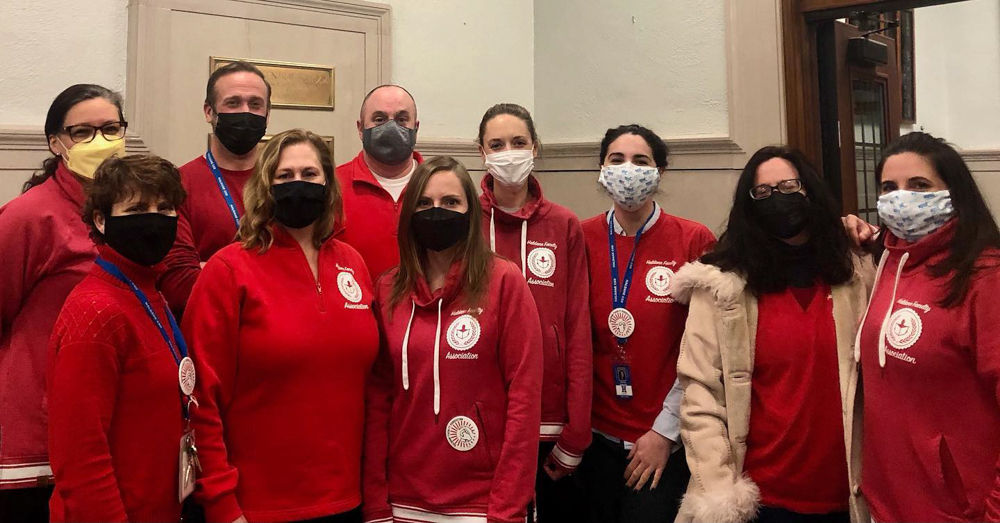 A group of Haldane teachers attended the Jan. 4 school board meeting to express their frustration with ongoing negotiations over a new contract. (Haldane Faculty Association)

District and union at impasse over contract

After a group of Haldane teachers attended the Jan. 4 school board meeting wearing red  and a representative said during public comment that months-long negotiations over a new contract were “an insult,” the superintendent and board president pushed back with a statement on Wednesday (Jan. 12).

“The district has acknowledged the hard work of administrators during this time with thanks and stipends, yet has failed to respect the professionalism and dedication of Haldane teachers,” Nancy Martinez, who teaches English at Haldane High School, told the board. “While we know we are supported by the community at large, we are now at an impasse for the second year in a row. We are professionals who deserve a swiftly negotiated contract with appropriate wage increases and no reduction in benefits.… Not settling a contract is an insult to us.”

Two parents also criticized the board for its policy of not responding at the meeting to those making public comments.

In their statement, Superintendent Philip Benante and Board President Jen Daly wrote that while “negotiations are typically a process that happens quietly and confidentially,” the discussions had “been brought into a public forum and the district feels a responsibility to provide a clarifying update.”

They said that, after about three months of negotiations, both sides agreed in September to file a “declaration of impasse” and hire a mediator appointed by the Public Employment Relations Board. However, they said, one was not appointed until December.

Near the end of the Jan. 4 meeting, Benante noted that the audience had left but that he wanted to speak to the comments. “I don’t think it is in the best interests of the district to engage in [public] dialogue about a contract negotiation,” he said. “That should be done in confidence [as agreed by both parties] and the district does have a process we engage in with our labor unions.”