She was born Dec. 20, 1933, in Carbondale, Pennsylvania. When she was a girl, her family moved to Yonkers, where she graduated from Roosevelt High School in 1950.

In 1958 she married Frederick DesMarais, and in 1968 they moved to Irvington. She worked for Lord and Burnham Corp. there and later for Westchester Medical Center as a secretary in the Bio Lab Department, until her retirement.

Gloria enjoyed gardening, reading book, crossword puzzles, and watching old movies. She loved animals and, when she lived in Irvington, could be seen every day walking her yellow lab, Buck, on the aqueduct and watching softball games at the park.

She had many fond memories of annual family picnics and spending the holidays with her family. She was known for her tight hugs, her family said, and was a dedicated member of Our Lady of Loretto.

She is survived by her children: Thomas DesMarais (Jessie), Frederick DesMarais, Christopher DesMarais and Melissa DesMarais; her grandchildren: Sidney, Katelyn (Devan), Taylor (Stephen), Thomas, Victoria, Kristen, Jacqueline and Alexis; and a great-grandson, Benjamin. She is also survived by her siblings Carmie (Tony), Joanne and Alfred (Agnes).

He was born in Astoria on July 9, 1936, the son of Charles and Marie (Guttilla) Freda. Joseph attended the Cardinal Farley Military Academy in Rhinebeck and earned his degree from Fordham University.

He owned Pilgrim Promotions for many years until his retirement. He had a passion for antique cars, both driving and restoring them. He also had his private pilot’s license and enjoyed spending time with his family.

A Mass of Christian Burial was held on Jan. 15 at Our Lady of Loretto in Cold Spring, followed by interment at Fishkill Rural Cemetery. Memorial donations may be made to St. Jude Children’s Hospital (stjude.org) or to the American Society for Prevention of Cruelty to Animals (aspca.org). 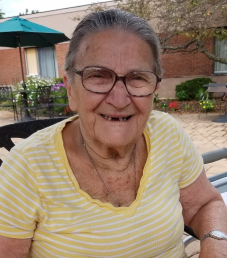 Josephine O’Connell, a longtime resident of Cold Spring and formerly of Yonkers, died on her 94th birthday on Jan. 11 at North Westchester Restorative Therapy & Nursing Center in Mohegan Lake.

Josephine was a longtime parishioner at St. Mary, Mother of the Church in Fishkill and active with the Philipstown senior center. She took great pride in entertaining her family, which always included cooking and serving her loved ones. She enjoyed watching television, especially programs in the detective genre such as Perry Mason and Law & Order. She also worked for several years at ShopRite in Fishkill.

A Mass of Christian Burial was offered on Jan. 14 at St. Mary, Mother of the Church, followed by interment at Fishkill Rural Cemetery. Memorial donations may be made to the Alzheimer’s Association (alz.org).

She was born Nov. 26, 1935, in Burlington, North Carolina, the daughter of Wayne and Lucy (Bivins) Patterson. She grew up in Boston and became a fashion model in New York. She also studied at the Art Students League under Mario Cooper. In 1967 in Mexico, she married Arthur Ross, who survives at home.

In the late 1960s, Carolyn made hand-painted silk evening gowns that were sold at Saks Fifth Avenue and Neiman Marcus. She was known as a generous person. Services were private.