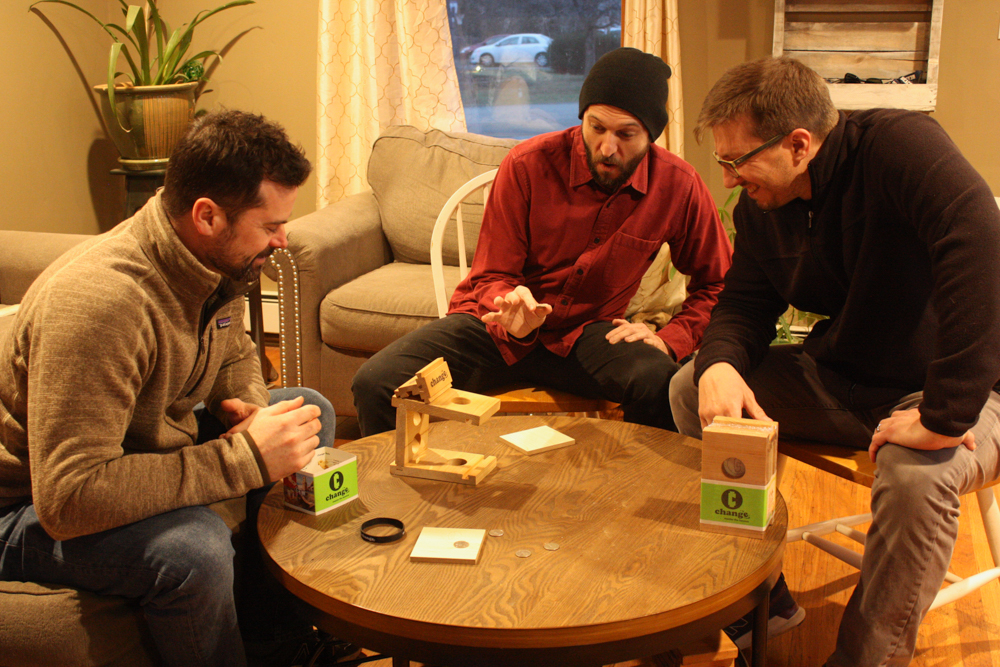 Like the proverbial mousetrap, three friends — an elementary art teacher, a graphic designer and a school psychologist at Beacon High School — are attempting to improve on a simple but popular concept: the game of quarters.

Brendan Davis, Dave Lumia and Nick DeMarco, all natives of Wappingers Falls, have been friends since childhood. They are also now partners in We Play Change, a firm in Fishkill that has just released its first product, a table game called Change.

The hinged, wooden “convertible quarter game” can be configured in any variety of ways and weighs about a pound. The goal is to bounce the most quarters into its holes. It includes suggestions for 12 variations. 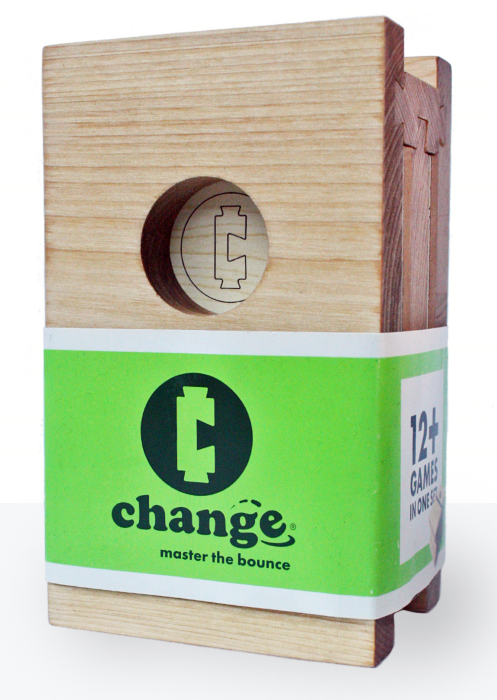 The Change game challenges users to “master the bounce.”

DeMarco, the school psychologist, says the three friends have played a lot of games together over the years, such as cornhole and Kan Jam disc-throwing. “One day, hanging out, we thought, ‘Let’s try to make our own,’ ” he recalls. “We’re all handy people — all of us had bought houses which required a lot of carpentry work — so why not?”

They spent about a month in a basement woodshop working on the concept. “We tried to address some of the issues we found with games on the market,” DeMarco says. “For instance, we wanted a game that could be played anywhere. We also wanted something that anyone or any group of people could play, even people with physical limitations, or those who have problems throwing a Frisbee,” such as in disc golf. In addition, they wanted a game that could change to avoid boredom.

With those criteria in mind, the friends began tinkering. Since the first prototypes, the most significant challenge was finding “launching pads” that provide the right amount of bounce for the coin.

“We tried about 50 surfaces, making sure they were workable on a variety of the surfaces where the game might be played: sand, grass, dining-room table, etc.,” DeMarco says. “Originally we were hand-making every one, weighing efficiency against consistency. We wanted it to be easy to transport, but didn’t want it to fall apart. It was a lot of fine-tuning.” 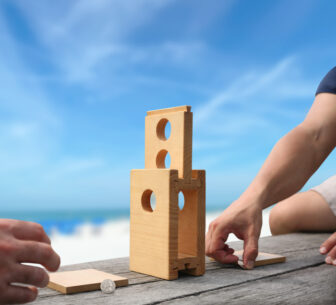 A version of the game called “Cricket on Dock”

The tested their prototypes at festivals and street fairs. “Everywhere, the reaction was positive,” he recalls. “We got a lot of, ‘You guys should go on Shark Tank.’ ” It was enough to convince them to begin production.

That’s when the learning curve got steeper. “There was so much that was new to us: the process of getting a patent, becoming an LLC [limited-liability company] — we’re not business people,” DeMarco says. “We searched long and hard for someone to make products that were durable and consistent.”

They contracted with a Connecticut firm, E.W. Hannas, and switched from pine to birch, which they found more durable.

We Play Change placed its first order — for 1,000 games — in the spring of 2020, just before the pandemic shutdown. Because of supply chain issues, they weren’t ready until November. 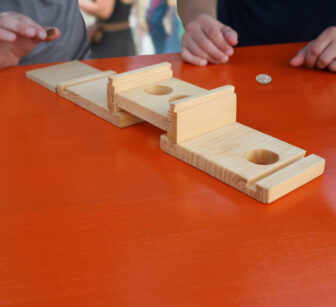 In the meantime, the friends prepared for launch. They hired a graphic design firm to redo the logo and packaging, and a social media company to strengthen their digital presence. They also began reaching out to retailers and organized tournaments at breweries. (Change is available for $40 at weplaychange.com.) While “quarters” is most commonly an adult drinking game, DeMarco says they have been pleasantly surprised to see their product also appeals to children and teens.

One thing they’re not doing yet is working on new games. “We’re focusing on ideas connected with this game, trying to make it as fun and interesting as possible,” DeMarco says. “We’re trying to create a community. For instance, someone at one of our tournaments created a game for Change based on Skee-Ball, which we’re regulating the rules for, and sharing.”

One thought on “Game Changers”