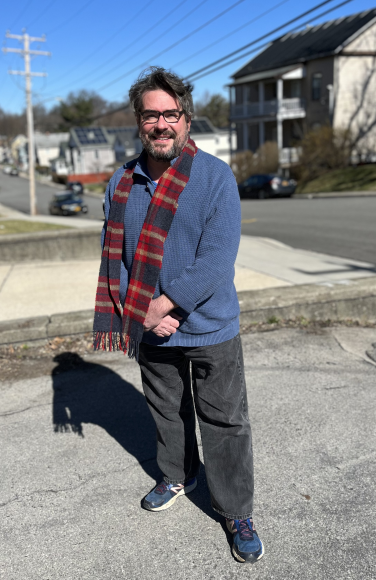 A short story by Peter Ullian, who lives in Beacon, is included in a new anthology of crime fiction, Say What Now? published by Murderous Ink Press as part of its Crimeucopia series. See highlandscurrent.org/podcast to hear more from this conversation, which has been edited here for brevity.

When we last talked, in 2014, you were wearing many professional hats, including librettist, puppeteer and security guard. Have you added or subtracted anything?

I’m not working as a security guard. In fact, I let my license lapse. I teach middle school English and reading and sometimes drama at a public school. Since I started teaching, I’m writing more poetry. Teaching takes a lot of mental energy and poems are easier to focus on because they’re shorter. They don’t take less time to write, but they are more easily digested. I didn’t think of myself as a poet, but I’ve been lucky to have had a chapbook published and poems appear in periodicals and anthologies and in one collection. I still love puppeteering, but mostly do it only on special occasions, at places like the Howland Public Library and at my synagogue for Hanukkah.

What’s the story behind your short story?

It emerged as I was beginning to write a novel. It takes place in Los Angles in 1933. I was doing research about the period and, in particular, about corruption, because it was an incredibly corrupt world. The brother of L.A.’s mayor in the 1930s had a job in the mayor’s office, accepting bribes. During the research, I came across an investigation into crimes that involved very rich people. The people who discovered them were limited in what they could do but tried to bring some justice. So, the story exists as a short story and will be woven into the novel.

How do you lay claim to “L.A. noir,” which is a familiar genre and setting?

It involves knowing and loving the genre. You need to know enough to draw on the tropes to the degree that they help tell the story but not be handcuffed by them. For example, there are a few catchy phrases that some of the characters might say or think that are to me reminiscent of the great turns of phrase that an author like Raymond Chandler would have come up with, but I don’t overdo that. I’ve been listening to crime and mystery radio dramas from the 1940s and ’50s. It’s interesting to see how quickly that hard-boiled style was adopted at the time, because they’re all written with the same jazzy, descriptive language, with unexpected metaphors.

The anthology has a British publisher. How did you wind up submitting to them?

It had only to do with the length of the story, which is just under 10,000 words. That’s long for a short story — not impossible, but long. There are not a lot of publishers of short fiction looking for stories of that length. The average is 5,000 or 6,000 words. Fortunately, Murderers Ink Press puts out anthologies of crime fiction, and they wanted to publish it. It was just kind of dumb luck.

Have you ever used Beacon as backdrop for a story?

I’ve started poking around with an idea because I realized that it might be nice to do something [about a place] I didn’t have to thoroughly research! The story is inspired by a crime that occurred about 20 years ago in Poughkeepsie involving a kickback scheme. I’ve fictionalized it, but it’s modeled after Beacon with the names of every location changed so I won’t get myself in too much trouble. Nobody who is a public official in Beacon should think that it’s in any way a reflection on their good character. It’s just the setting, modeled on the place I know best.