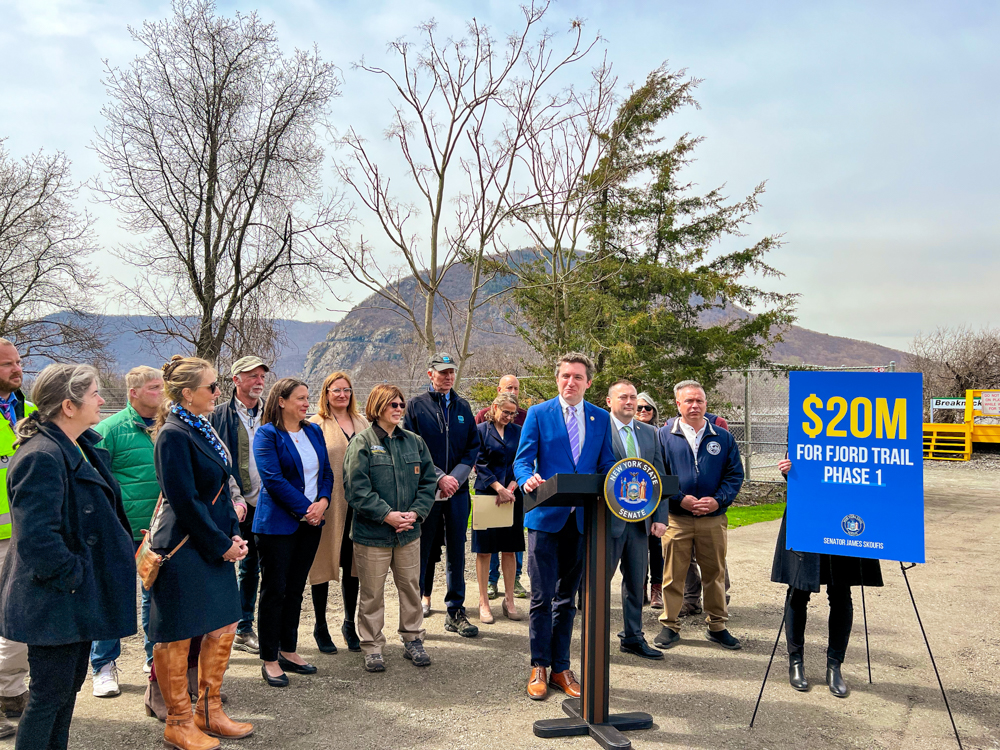 Money will allow work to begin in the fall

A line item in this year’s state budget included $200 million for the state parks department for capital improvements, an $80 million increase over what is typical.

State Sen. James Skoufis, a Democrat whose district will include Beacon and Philipstown if he is re-elected in November, said it wasn’t enough.

In the end, the line was increased by $50 million — $30 million to be spent on upgrades at Harriman State Park and $20 million on the proposed Hudson Highlands Fjord Trail. The boost in funding will allow construction to begin this fall, officials said.

Skoufis announced the additional funding on Thursday (April 21) at the Breakneck Ridge train station with local elected officials and environmental leaders in attendance.

“You’re going to see all of these cars that clog up Route 9D and make for a really awful quality of life issue for local residents and businesses be ameliorated as part of this Phase 1,” said Skoufis. “Those cars will no longer be crowding the shoulder all up and down 9D.”

The Fjord Trail project was conceived years ago as a riverside trail running from Cold Spring to Beacon. But in light of Breakneck Ridge’s surging popularity as a day hike, resulting in overwhelming crowds, traffic and frequent visits from emergency responders, the project became more ambitious.

According to MJ Martin, director of development and community engagement for the Fjord Trail: “Phase 1 will involve the construction of more than 100 parking spaces adjacent to the Breakneck Ridge trailhead, along with bathrooms and other amenities, and a pedestrian bridge to cross over the tracks to the Shoreline segment of the trail, a 2-mile riverfront promenade heading south toward Little Stony Point, and ultimately Dockside Park. The Shoreline segment is planned as Phase 2 of the project.”

In addition, erosion damage caused by large numbers of hikers will be repaired. The Breakneck Ridge train station, which has been closed since the beginning of the pandemic shutdown, will be upgraded; a Metro-North representative confirmed this week that the agency plans to reopen the station following the installation of fencing that has been delayed by supply chain issues.

Ned Sullivan, the president of the nonprofit environmental group Scenic Hudson, said that while he believes New York has the best state parks in the country, the state budget has not kept pace.

“The safety, the health and the basic public amenities in our park system have fallen down because the funding has not been there,” he said. “Breakneck Ridge has exemplified that crisis. People have paid in life and limb, literally, for these deficiencies and safety hazards.”

Cold Spring Mayor Kathleen Foley noted that while the county and state have promoted the village as a tourist destination, it has largely borne the cost of that tourism alone.

“We have, if we’re honest, felt besieged by the crowds passing through the village on their way to the trails,” she said. “The crowds aren’t going away. So we have to manage them. The Fjord Trail will bring a rationalized pedestrian and vehicular traffic flow, and much-needed basics like toilets, which we just can’t afford to provide on our own. And God willing, it’s going to bring proper park staffing, so that our first responders stay safe and ready in our village, where they belong.”

Amy Kacala, the executive director of the Fjord Trail, said construction managers are planning on Phase I taking about 20 months. She noted that when it begins, Breakneck Ridge and the Wilkinson Trail will be temporarily closed. “There’s going to be a lot of construction activity happening in a very limited space,” she explained.

An earlier version of this story stated that "Phase 1 will involve the construction of a vehicle lot that will allow hikers to park between the river and the train tracks and a pedestrian bridge to cross over the tracks to a trailhead that will not be accessible from Route 9D." A correction and clarification by MJ Martin, director of development and community engagement for the Hudson Highlands Fjord Trail, has been added to the story.