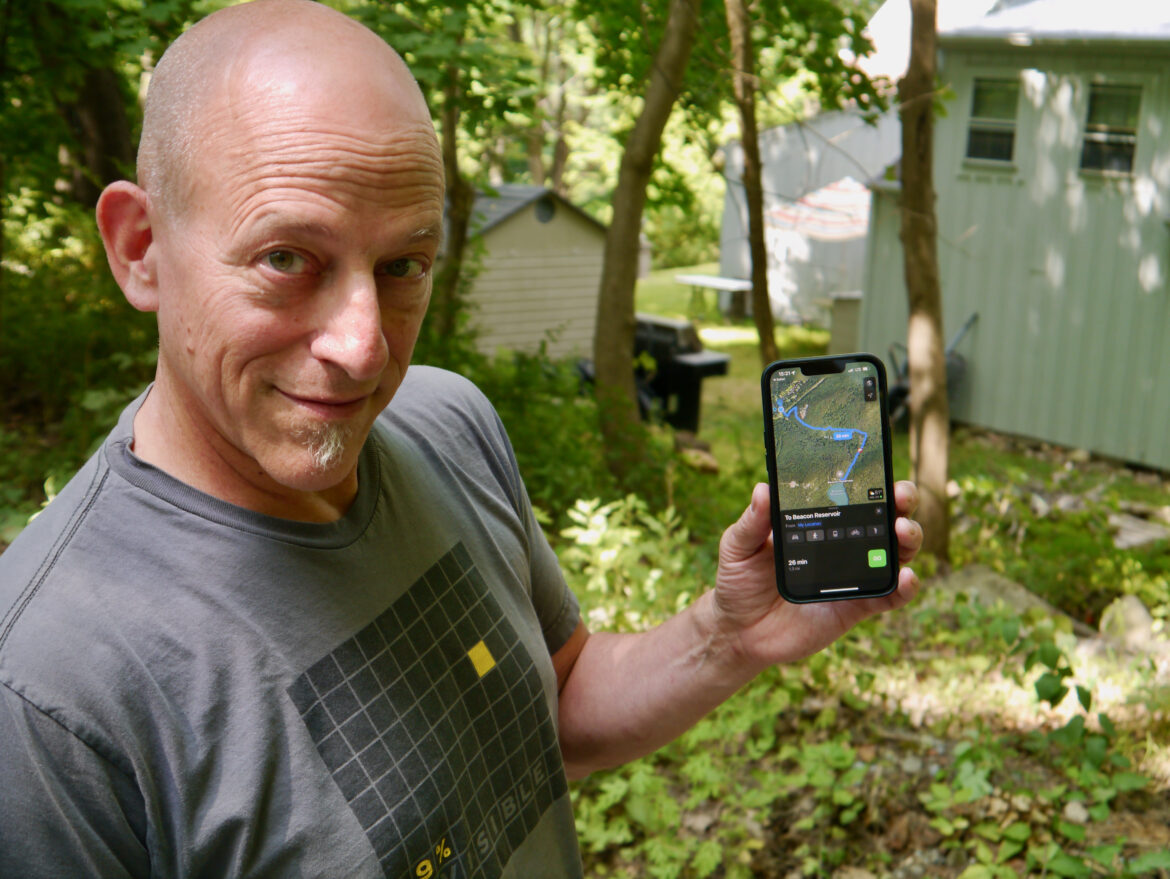 Jeff Battersby, who lives near the private Mount Beacon Monument Road, displays a mapping app that identifies it as a public route to the reservoir. (Photo by J. Simms)

The drowning of a Beacon man earlier this month has highlighted the issue of trespassing at the Mount Beacon reservoir, a problem made more complicated by the tangled web of municipalities and agencies that have jurisdiction over the remote site.

A 911 caller reported Robert “Bobby” Anspach, a 34-year-old artist, missing at around 9:20 p.m. on July 5. Emergency responders, using a drone with thermal imaging supplied by the Dutchess County Sheriff’s Office, searched the reservoir until 1:30 a.m. and then resumed the next morning. State police divers found Anspach’s body about 30 feet offshore.

While drownings are not common, the problem with trespassing at the reservoir and on Mount Beacon Monument Road, the winding gravel road that leads to it, “goes back for many years and many administrations,” said Chris White, Beacon’s city administrator.

Penelope Hedges, who lives on Mountain Lane, a stone’s throw from Mount Beacon Monument Road, said that her family installed an iron gate at the base of the private gravel road in the 1950s. However, in recent years, after the family granted easements to the various agencies that need access to the road, the gate has been vandalized and its lock stolen or, other times, filled with glue.

Hedges said this week that it’s been impossible to consistently monitor the gate, so it stands open, allowing access to anyone daring enough to brave the steep and rocky road. 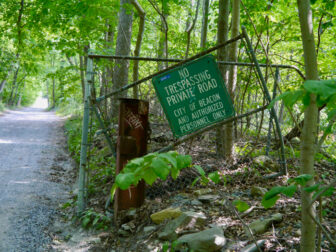 A gatepost and damaged fencing near the entrance to Mount Beacon Monument Road (Photo by J. Simms)

Atop Mount Beacon Monument Road, signs indicate that swimming is prohibited at the reservoir, one of three maintained by the City of Beacon as part of its drinking water supply. But a quick online search confirms that the signs do little to discourage swimming at the site.

About a quarter-mile from the South Mount Beacon fire tower, “social trails” also lead hikers to the reservoir, said Evan Thompson, the manager of Fahnestock and Hudson Highlands State Parks.

There also have been complaints for years about people driving all-terrain vehicles, Jeeps and trucks up the mountain, which tear up the roads and trails. Long before it was state parkland, adventure-seekers would run trap lines on the mountain, camp overnight and haul up building materials to construct their own makeshift cabins. In the 1960s, gearheads stripped down Volkswagen Beetles, converted them to dune buggies and rolled around on the mountain to their hearts’ content.

Then, as now, one of the obstacles to enforcement is that the trails pass through land controlled by several parties. “The City of Beacon gets the brunt of the complaints when something goes up there because everyone associates Mount Beacon with Beacon,” Douglas Solomon, then the police chief, told The Current in 2015. “Which seems obvious. But once you go a hundred feet up Monument Road, you’re out of our jurisdiction. And once it’s on Scenic Hudson [now state] lands, it’s technically their problem.”

The maze of agencies is confusing.

Beacon owns the reservoir, but the land around, which lies in the Town of Fishkill, is part of the Hudson Highlands State Park Preserve. “That’s the problem: If you’re swimming and get out of the water and walk 10 feet, you’re in Fishkill,” said Matt Ciccone, Hedges’ son.

So while Hedges, Ciccone and another neighbor, Jeff Battersby, say they routinely see cars driving up Mount Beacon Monument Road, which, at its base, is located within city limits, there’s often little the Beacon police can do.

For example, Sands Frost, Beacon’s current police chief, pointed to a 2009 case in which a 23-year-old Syracuse man killed his wife and drove 220 miles to dump her body in the Mount Beacon reservoir. The man was arrested after walking into the Beacon Police Department and admitting to the killing, but the department turned the case over to state police, Frost said, because of the city’s limited jurisdiction.

Although the Town of Fishkill has no policy for patrolling near the reservoir, it purchased a $30,000 Polaris all-terrain vehicle to respond to emergencies on Mount Beacon, along Fishkill Creek and, once it’s open, on the Hudson Highlands Fjord Trail, said Supervisor Ozzy Albra on Tuesday (July 19).

The police have yet to use the vehicle, he said. During the Fishkill Town Board meeting on Wednesday, Chief Keith Dworkin explained that it’s logistically challenging to patrol the reservoir. Because vehicular access is difficult and cellphone service spotty, “that’s basically a lost officer,” he said, if the town were to send someone regularly.

The Parks Department said its staff members, such as Thompson, visit the area when they can and alert police to trespassers. But only three park police officers are assigned to the Taconic Region, which includes Columbia, Dutchess, Putnam and Westchester counties. New hires will attend a training academy this fall, but “we probably won’t see anybody for at least a year,” Thompson said.

In addition to officers from Beacon, Fishkill and the Parks Department and DEC, the New York State Police, the Dutchess County Sheriff’s Office, emergency responders and vehicles associated with the radio and telecommunications towers on Mount Beacon also require access to the reservoir area at times.

Next spring, the city will begin rehabilitating the reservoir dam. After that project is complete, White said there’s been talk of partnering with the Parks Department to reinstall a gate on Mount Beacon Monument Road.

An electronic gate with keypad has been discussed before but, out of all the agencies in the area, “no one wanted to take care of it,” Matt Ciccone said.

Moments after he shared that last week, on a Friday afternoon, a woman drove a sedan up Mount Beacon Monument Road. Seeing Ciccone and Battersby, she rolled down her window to ask if she was on the right road.

The woman said she’d driven from Queens after reading online about swimming in the reservoir, and she wanted to let her dog get in the water.

Battersby advised the woman that swimming is prohibited at the reservoir and showed her where she could turn her car around. He said she was welcome to pull into his driveway near the base of the road and let her dog splash in a stream that runs through his property.

2 thoughts on “Who Rules Mount Beacon?”