Members of the Philipstown Town Board informally agreed Wednesday (July 27) to consider restrictions on short-term rentals after residents complained at a Town Hall workshop about a neighbor’s long-running Airbnb on Nelson Lane in Garrison.

But the owner of the Airbnb, at 26 Nelson Lane, told The Current her neighbors have engaged in harassment and lies.

Melissa Harris, who lives on Nelson Lane, told the Town Board that No. 26 is rented almost constantly. Airbnb’s website describes it as suitable for up to 12 guests, with five bedrooms, 2½ bathrooms, a sauna, hot tub and swimming pool, available for $1,164 per night.

Neighbors assert that tour buses arrive with as many as 50 to 60 guests and that visitors often indulge in noisy and unruly parties. Nelson Lane intersects with Route 9D and borders the Garrison School.

In a Fourth of July incident, Harris said, a group occupied No. 26 and her family, next door, heard women screaming for help. She said her son ran outside and then called the Sheriff’s Department, although a deputy never responded.

Meanwhile, she said, an adult male in a vehicle left the No. 26 driveway “and threatened my son for calling the police. My family felt extremely unsafe for the rest of the week,” not knowing “if the menacing man would be returning to harm our family.”

Claudine Struck, who owns the Airbnb, refutes that allegation. “They called Airbnb, made this fake claim that there was an altercation, that they had called the police, that they were threatened. It was a complete lie, because I was on the property” with family members that night, she said in an interview on Thursday (July 28).

“They’ve actually been harassing me,” she said, saying she had filed a previous report with the Putnam County Sheriff’s Department. Now, she added, she plans to bring a harassment claim “about the false claim to Airbnb, because that’s not OK,” she said. “To harass me as a Black woman in a white town? That’s just not OK.” 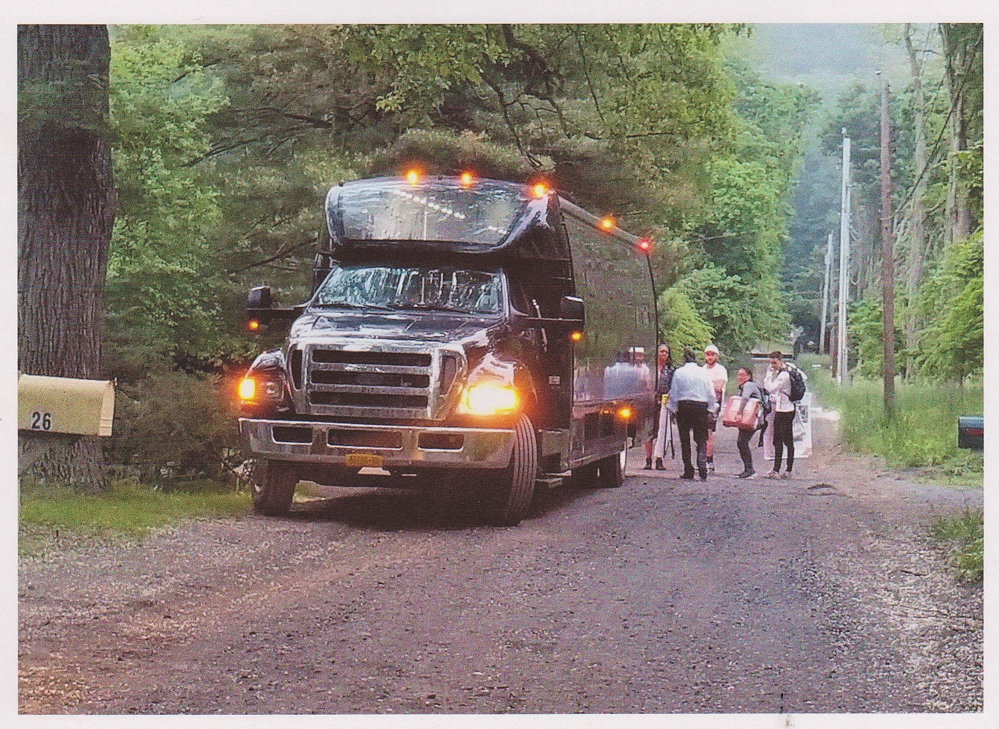 In a photo taken by a neighbor, passengers gather around a tour bus outside a short-term rental on Nelson Lane in Garrison.

Asserting that she has “always been cooperative,” Struck said “I’ve gone above and beyond being neighborly.” She acknowledged some guests have been loud, but “it’s definitely the minority” of the many who’ve patronized her business since she began renting the home in 2003.

The neighbors who attended the Town Board meeting on Wednesday called for a law that requires short-term-rental owners to occupy the property; limits the number of rental units permitted in Philipstown; and limits the number of guests per booking. They also urged the Sheriff’s Department to enforce noise and safety regulations.

“I’m not against short-term rentals,” said Harris, who is the Nelsonville village clerk. “I just want regulation.”

Philipstown’s zoning code, adopted in 2011, allows bed-and-breakfasts, with Planning Board approval. It defines a bed-and-breakfast as “a dwelling in which overnight accommodations not exceeding five bedrooms and breakfast are provided for transient guests for compensation.”

It separately provides for “lodging facilities,” such as hotels, motels, inns or any “other establishment providing sleeping accommodations for transient guests, with or without a dining room or restaurant.”

“There’s a lot of short-term rentals throughout town that run successfully and quietly,” Supervisor John Van Tassel said. He observed that the short-term-rental question recurs periodically. “I knew eventually we were going to have to do something.”

“There are ways to do this that would not overly restrict” short-term rentals or impair owners’ income from their properties, said Margaret Yonco-Haines, another Nelson Lane resident. She added that if officials act, residents will understand that “this is not something to fool around, that it’s taken seriously by the town.”

Van Tassel pointed out that enacting legislation can take months of legal work and public hearings and said he wants to establish a task force. He cautioned that solving the problem involves enforcement, not just passing laws.

The supervisor promised to confer with the building inspector/code enforcement officer and Sheriff’s Department, and to speak to Struck. “It’s worth a shot,” he said.

The Cold Spring, Nelsonville and Beacon governments have also heard complaints in recent years about short-term rentals, and all three passed laws to regulate them.

4 thoughts on “Philipstown Agrees to Look at Airbnb Regulation”