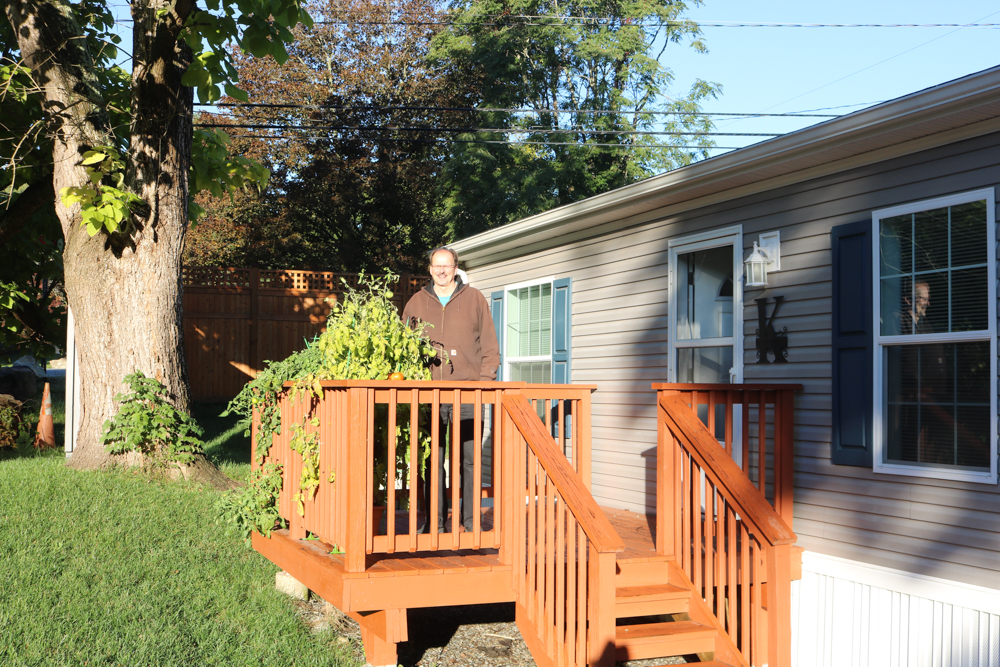 Television programs such as Welcome to Myrtle Manor and Trailer Park Boys haven’t boosted the image of mobile homes.

But a sampling of residents of the Post Road Mobile Home Park on Route 9 in Philipstown paints a more pleasant picture of what for many people is an affordable alternative to a traditional home.

Joe Lois, the principal of Lois Realty, purchased the 12-acre parcel more than 50 years ago. “It was already a mobile home park,” he recalled. “But it took me a lot of years to get it right, to replace the water system, replace the sewer system.” 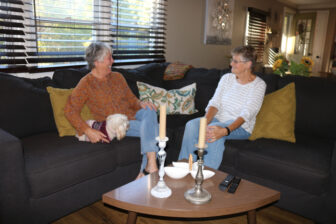 Residents rent the lots — all 43 are occupied — for an average of about $700 a month and own the homes, which cost about $80,000 to $117,000. The rent covers road maintenance, snow removal, trash pickup, water and shared septic systems that each serve six to eight homes.

Technically, mobile homes ceased to exist in 1976, when the U.S. Department of Housing and Urban Development began regulating their construction. Mobile homes built after that date had to adhere to safety and quality standards and became known as “manufactured homes.”

In recent years, investors have been buying up mobile — manufactured — home parks, raising the rent and sometimes evicting tenants. Some parks, such as one in Niagara County, have more than 1,000 lots, Lois said.

“I’ve had plenty of offers” to sell, he said, but he plans to keep the business for his daughter to one day take over.

One of his tenants, Debbie Darman, sold her Cold Spring home five years ago. Living at Post Road made financial sense but “was going to be temporary,” she said. “But once I settled in, I absolutely loved it. For where I’m at in my life, it’s perfect.”

She purchased her manufactured home from a contractor who had made improvements while living there. The 1,100-square-foot, two-bedroom house has two additions and includes two decks, a screened-in porch, a pitched roof and an attic. The lot has front, side and back yards. 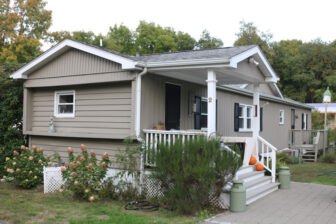 Debbie Darman’s home has undergone a number of improvements.

She sees other advantages over village life, as well. “You don’t have distractions here; you’re in your own little community,” she said. “In Cold Spring there were always people moving about, vehicles parking in front of your house, dogs being disruptive.”

And unlike most Cold Spring homes, hers has parking for three vehicles.

Sean and Elizabeth Ramsay and their 5-year-old son Hunter have lived at Post Road for three years, after moving from another manufactured home in Rockland County. Their 1,600-square-foot home, purchased new, has four bedrooms and two bathrooms.

Ramsay works in construction in Rockland County. His wife works online from home.

“We drove around looking for a quiet mobile park that we liked,” he said. “We got lucky — the other parks we looked at weren’t very nice.”

They were also lucky to nab the park’s last available lot. It was a big improvement for the family, who paid $1,100 a month in Rockland while living in an older, smaller home.

“Here we have a nice property; all the neighbors are great,” he said. “It’s very quiet compared to where we came from.”

He thinks Post Road is a good place for his son to grow up, and he and his wife like being in the Haldane school district. Hunter started school this fall and has a friend and classmate who also lives at Post Road.

“We can make it work here, because we don’t have many bills,” Ramsay said. “We don’t have a mortgage; the house is paid for.” 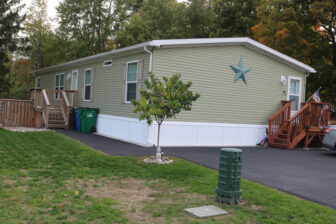 Most of the newer homes at Post Road are double-wides.

Walter Klietz, 60, who retired after a 33-year career with the U.S. Postal Service, moved from Poughkeepsie to a 1,230-square-foot, two-bedroom home at Post Road four years ago. He continues to work part-time in Dutchess County.

“I had three new models to choose from — it was affordable,” Klietz said, noting that, unlike apartment living, “you have your own space here.”

Installation of the home was included in the purchase price and involved securing the structure to a 6-inch concrete slab, a requirement for all new homes in the park.

Klietz said he had two concerns when he moved in, though both were taken care of quickly. Discolored water was eliminated with upgrades to the water system, and erecting a fence greatly reduced the traffic noise from Route 9.

Storage is a minor issue, he said. “I should have bought a bigger shed!” Instead, he has put the spare bedroom to use.

He said he especially likes that the home is well-insulated, which makes it inexpensive to heat with propane.

Klietz thinks the stigma once associated with mobile homes no longer applies. “It’s a house,” he said. “The only difference is that it happens to be built on a steel frame.”

Pauline Minners, a former clerk for the Village of Nelsonville, moved to Post Road five years ago after selling her home in Philipstown.

“My home was on an acre of land,” she recalled. “I was ready to retire and when my mother passed away, and my daughter went to college, I didn’t need the house and all its bills.” 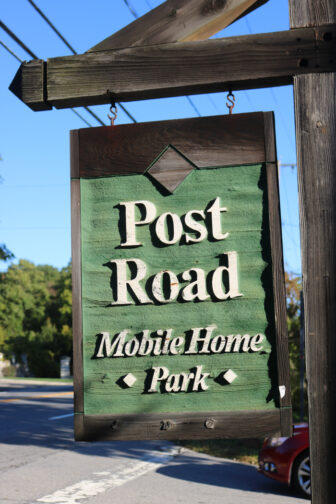 She bought a new manufactured home and moved into Post Road next to her sister. “I call it my ‘hobbit home’; it has two bedrooms and baths,” Minners said. “It’s cool, so much less expensive — and no acre of grass to mow!”

Like Darman, she likes the community feel. “It’s a nice a bunch of people; at Labor Day, we had a neighborhood barbecue,” she said. “I can walk around here at all hours of the night, nobody bothers you, everyone says hello.”

As for improvements, she said some of the units are quite old and that the asphalt roads are ready to be resurfaced.

While none of the residents surveyed mentioned shortcomings, manufactured homes do have them. At a park such as Post Road, residents can’t walk to the corner store. They have to drive to everything. Manufactured homes don’t appreciate in value as quickly as traditional homes. And financing can be tricky, especially in a park where the homeowner does not own the land. Manufactured homes are, however, eligible for government-insured loans.

In July, the Department of Housing and Urban Development proposed new regulations that the agency hopes will increase innovation and greater production of manufactured homes to help meet housing needs and address demand for features such as multi-unit dwellings, ridge-roof designs, open floor plans, attics and improved accessibility.