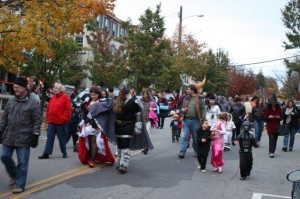 The parade gets bigger each year

“Are you going to the parade?” was an oft-repeated question last Saturday as locals and not-so-locals gathered in Cold Spring. Without exception the answer was “Yes!” or “Absolutely!” or “We wouldn’t miss it!” The “it” was the annual Halloween parade and this year’s event did not disappoint. Hundreds of people — kids, parents, friends, neighbors and strangers – and a good number of their pets – marched and showed off costumes that ranged from scary, unique and humorous to beautiful, novel and traditional.
Revelers gathered near the only traffic light in town before embarking on the short hike down Main Street to the riverfront bandstand. Marchers easily outnumbered those who watched from the sidewalks. A group of local musicians waited at the bandstand, blasting out The Monster Mash and other appropriate tunes. When the parade arrived at the riverfront it melded into one large sea of humanity. Everyone was smiling, laughing and talking. There was a mix of adults and kids, but on some level, for a brief moment in time, everyone was a kid. 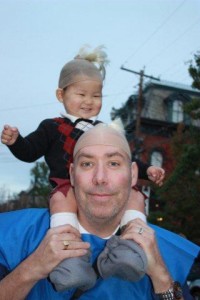 Jay Tarrant and his son Kubrick

The annual Halloween parade is an incredibly simple and popular event. No food, drink or souvenir stands.  No parade floats or marching bands. It simply works. And as one parade watcher put it, “I think it gets bigger every year.” Just what is it that makes Halloween so popular — and so much fun — in Cold Spring? A very unscientific survey by Philipstown.info has unearthed some of the answers.
Jonathan Kruk, Hudson Valley’s best-known storyteller, credits a local organization with getting the Halloween ball rolling. “The Chamber of Commerce launched the Halloween parade in 1993″¦to promote community fun. It served as a coming-out party for Halloween in Cold Spring. Parents and kids loved it. It ignited a tradition of spooky props and wild decorating — already happening on Parrott and Paulding Streets.”
Kruk believes Cold Spring’s layout and small-town character add to Halloween’s success. “The layout here makes trick-or-treating far easier. Other communities are spread out, or are afraid of ‘real goblins’ even more than ghosts. Fears of tainted candy”¦ have very little factual basis, but cut down on trick-or-treating. In Cold Spring, people know it’s safe to let kids trick-or-treat on their own.” 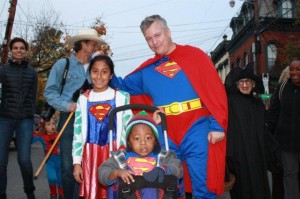 Some costumes were traditional

Cold Spring’s mayor thinks that geography also plays a part. Seth Gallagher said that because the rest of Philipstown is so spread out, Cold Spring offers residents of Garrison, North Highlands and outlying areas an easy place to gather for Halloween celebrations.
Local musician Buddy Traina thinks the reasons behind Halloween’s popularity are pretty basic. “Halloween is just a cool holiday. There’s no pressure, no gifts to buy. People embrace it for what it is. You get to show your fun side — maybe even your secret side. As a musician, I’ve had some of my best gigs on Halloween. It can be magical,” he said.
Mike Musso and his wife Dani offered differing views in explaining Halloween’s local appeal. According to Mike, “It’s because it has become such a community tradition.” But for Dani, it is more about the nature of many local residents. “Think about all the creative people who live in Cold Spring — they’re musicians, actors, writers and artists.” 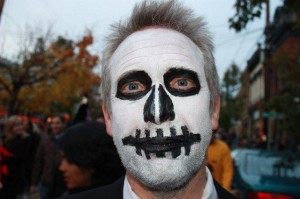 Some costumes were SCARY!

“Creative people” was one of the most common reasons cited in explaining why Halloween is done so well here. “I think Cold Spring is very creative. And Halloween gives adults an outlet for their creativity — without being judged” said Ame Chiera.
A local church even contributes significantly to Halloween’s huge popularity. St. Mary-in-the-Highlands Episcopal Church features elaborate decorations and is open to trick-or-treaters. It has become one of the most popular local destinations. “We’ve been doing the Haunted Church for about 6 years now.  I got the idea one year when I was taking my children around trick-or-treating. It was so cold I kept hoping someone would invite us in to warm up. I thought we should open the church so people could warm up,” said St. Mary’s pastor, Father Shane Scott-Hamblen. “We’ve continued because so many people said, ‘We’ve lived in Cold Spring for years but have never been in this church.’  We now get hundreds and hundreds of people. There’s even one family that drives down from Canada “¦ and the props have grown every year.” 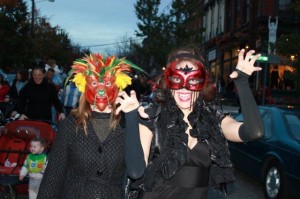 Adults show off their creative side

Scott-Hamblen thinks that having his church take part in Halloween makes sense in religious terms as well. “Halloween is said to have come from All Saints’ Day or All Hallows Eve. It was originally a Christian holiday that turned secular.  We’re just reclaiming it because it’s fun.  Supposedly, the custom in some countries was to dress up like ghosts and demons to scare the devil away — a kind of Christian pride and confidence that goodness is stronger than evil and the devil is a coward.  It’s good theology, really,” he said.
Gary Arceri operates the Ellen Hayden Gallery on Main Street along with his partner, Ellen Hayden. Last Saturday he had a great vantage point from which to watch this year’s parade. He also had the most creative explanation for Halloween’s popularity in Cold Spring. “There was a train wreck in Cold Spring in 1963. Seven passengers were never accounted for. Slime was found 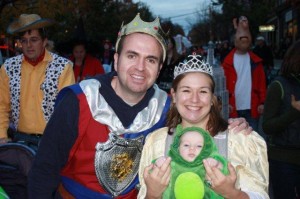 Halloween in Cold Spring is all smiles!

on the tracks and on the front of the engine. Nessy, the Loch Ness monster, lives in this area and was responsible for that accident,” Arceri said. “Dogs and children have also mysteriously disappeared from the village. But it was that 1963 train wreck that made Halloween really popular here.”

One thought on “Another Big Halloween in Cold Spring”