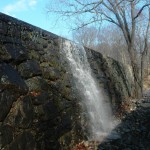 Cold Spring last week circumvented a potential obstacle to access to its upper dam when two property owners agreed to accept a road-paving project. The accord followed days of frenetic events: a neighbor’s Nov. 18 blockage of the road; his public statement Nov. 19 opposing the paving; an unusual Saturday meeting of the Cold Spring Village Board, Nov. 20; an engineer’s evaluation of the project Nov. 22; completion of the paving during the day Nov. 23, and confirmation at the board meeting several hours later that all seemed to be well— at last. “It’s done,” Mayor Seth Gallagher said in a comment that referred to the paving but might describe the underlying controversy — or series of controversies — involving access to the Upper Reservoir Dam.

With its partner, the Lower or Middle Reservoir Dam on Foundry Pond Road, the upper dam constitutes part of the Cold Spring water system. Both dams apparently date from the heyday of the 19th —century West Point Foundry, a Cold Spring factory that drew on water power from Foundry Brook. The reservoirs and dams feed the brook, which runs from North Highlands through Nelsonville and Cold Spring. In a 2006 letter, then-Mayor Anthony Phillips informed the Philipstown Zoning Board that to maintain the reservoirs the village had rights “granted in deeds from the Foundry owners. The access to the dams was never at issue since the old roads which lead to the dam were open and used on a regular basis by the village, since the grants were made.” But the Ant-Ant Corp., a New York City firm associated with developer Alfredo DeVido, acquired land near the reservoirs and sued, denying any village right to enter the dam area through an old road bordering DeVido property. Backed by the Town of Philipstown, Cold Spring defended its claims. This fall, after several years of litigation, the village adopted a different approach — literally. As compensation for surrendering any rights to the contested entry, it agreed to accept $13,000 from the developer. Likewise, in exchange for easements allowing village use of another old path to reach the old road, the village arranged to pay $10,000 each to two sets of land-owners — an individual, Vincent Casolaro, and a couple, Leona and John Faust. As part of the deal, it also promised to pave the remainder of a partially-paved lane, Faust Court, which connects Foundry Pond Road to their properties. Finally, the village hired the Town of Philipstown Highway Department to undertake the paving. 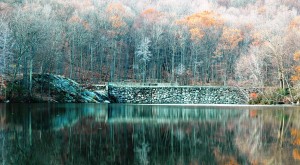 The Upper Reservoir Dam, looking across the Lower (or Middle) Reservoir

Then things got complicated, again

When the paving crew arrived to get started, it found the way blocked by a car belonging to David Weinpahl, whose property at 88 Foundry Pond Road is bordered by Faust Court. The town highway department retreated. Two days later, Mayor Gallagher and Trustees Bruce Campbell and J. Ralph Falloon (with Trustees Airinhos Serradas and Charles Hustis unable to attend) convened a special Saturday-morning Village Board meeting. During the proceedings, they awarded an $8,500 contract to a new paving company and confronted a dilemma: The easement contract with the Fausts and Casolaro required the village to pave the road; but Weinpahl and another neighbor, Ronald Kahn, objected. “It just s__cks that we’re at where we’re at,” Falloon observed. “Obviously this is a can of worms we don’t want to be in.”
Weinpahl had thrown a few more worms into that can with a letter to the editor, published by Philipstown.info 18 hours before the board meeting. “What gives the village the right to make access agreements on private roads with only half the owners?” he asked. Kahn voiced a similar concern Nov. 20: “I don’t understand how the town [village] can make a decision to pave the road if the town doesn’t own it.” Mayor Gallagher pointed out that “we’re under obligation to pave it, and Mr. Casolaro says that he owns the whole road.”
Contacted by speaker phone during the meeting, Stephen Gaba, Cold Spring village attorney, said that Faust Court’s primary owner can make the decision in such situations: “The owner of the dominant tenement has the right to improve it. That extends to paving.”
Weinpahl and Kahn also raised concerns about water run-off after the road paving. “I still think there’s going to be some problems,” Kahn told the mayor and trustees. “I’d like to see a little engineering study there. I’d like to see a storm drain there.” In his letter, Weinpahl similarly stated that “despite my several requests for a storm water management plan prior to paving, the mayor refuses to prepare one, but promises, by word, that the village will fix whatever needs to be fixed if there are water problems on my land or Foundry Pond Road.” Cold Spring will indeed deal with any contingencies, Gallagher and Falloon assured Weinpahl and Kahn. “We’re not going away” from such difficulties, they both said. “I guarantee it,” Gallagher added.

Village consulting engineer weighs in
In another speaker-phone conversation, Ronald Gainer, a consulting engineer for the village, said that “the road is essentially a hard surface and will shed water, anyway,” even without being paved its full length. Thus, after paving, adjacent land “is going to see the same amount of water as before,” he said. Gainer reiterated those points after another trip to Faust Court on Nov. 22. “It is my professional opinion that the paving of Faust Court should have no adverse effect on the [Weinpahl] property at 88 Foundry Pond or create any adverse conditions with the town’s roadway or drainage system,” he wrote in a report. Moreover, he said, “in evaluating 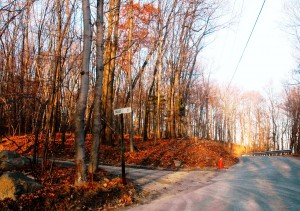 The intersection of Faust Court, before paving, and Foundry Pond Road

storm-water impacts, it is important to first consider the magnitude of the project being pursued by the village.” The section of road to be paved, 12-foot-wide by 330 feet long, “involves an area of only .09 acres,” while New York State Department of Environmental Conservation guidelines require a formal storm-water plan “where land disturbances exceed 1 acre. The village’s project encompasses an area less than 10 percent of this threshold.”
In his Nov. 19 letter, Weinpahl said that when Gallagher requested temporary village access to Faust Court in 2009 for emergency dam repairs, “I told him `no,’ and reminded him the village already had access via the old road adjoining DeVido’s property. But the mayor claimed it would be too costly for the village to go that route and that it was impassible. The reality is, that road was intact, and with a day of clean-up the village could have been to the dam.” Gallagher disagreed. “The biggest, glaring thing is he claims that by a day’s worth of work we could’ve gotten through on the old road there,” he said in a phone call to Philipstown.info. “A conservative estimate is that it would take $100,000 to $200,000.” He said that the village would have to clear a portion of the old road that, for decades, “probably has not been passed-through. It’s absolutely impossible to do that.” In the recent past, the village relied on a section that now sports houses or belongs to someone unwilling to provide access, he said.

Resolution
By the end of the Nov. 20 meeting, Weinpahl and Kahn had acceded to the paving and, at Gallagher’s suggestion, to consider their own easement arrangement with the village. “You don’t need to do one, but the more things you get on paper, the better,” Gallagher told them.  “We’ll have to work it out. We want to keep open dialogue,” Weinpahl responded.
On Nov. 23, Faust Court was paved. That night, Gallagher said that Weinpahl and Kahn had been very cooperative and that Cold Spring would not be paying them for any new easements adopted.