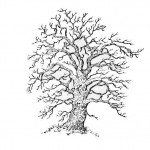 It’s a rare individual who isn’t curious about from whence he or she came.  Tracing back one’s lineage can define an identity, illuminate patterns of family behavior or simply be an alternately engaging and frustrating game of detective work. With the advent of the internet age, genealogy has become a distant cousin to the painstakingly slow but often deeply rewarding searches of yesteryear.  With just a few clicks of a mouse, documents spring forth from dusty archives, and gaps of knowledge are filled in instantaneously.  These advances are not always what they seem, however, and it is important to step back from the heady rush of discovery and better evaluate all that suddenly appears.
So says Martha Callaway, who has just begun instructing a genealogy workshop at Butterfield Library.  Callaway, who works at the library, is a former research librarian and researcher by profession, and she began researching her own family history only a year and a half ago, but she had the advantage of “knowing how to work the Internet.” The six-session series began on Feb.14 with an introduction to the basics of family history research, including, per the course description, “getting organized, using the Library’s free resources such as Ancestry.com, Heritage Quest Online, and the vast resources available through the Mid-Hudson Library System.”
Last Monday’s session attracted a number of people just starting out on their research, and a few who were well underway with theirs.  Callaway described this first session as an overview, suitable for all attendees, with a focus on the software and databases designed to aid in the search.  Many of these programs are available, some in abridged editions, through the library, and there are sign-ins and passwords made available to participants to log in from home.  Before journeying into the wilds of these online tools, however, Callaway was quick to remind the class that one the first things they had to do was to interview their relatives, and then they could use what was gleaned in combination with the genealogy programs. Pointing out lots of resources, Callaway cited the Putnam County Historical Society (for those 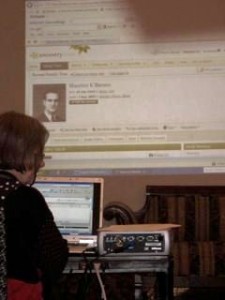 whose families have lived here for generations), the mid-Hudson Library system, Heritagequest.com, the New York Public Library, which she dubbed “heaven for a genealogist – – you can email them a day before your visit with up to three things you want, and they will have it ready for you,” and the Mormon-established Familysearch.org, the largest genealogy organization in the world.  FamilySearch also offers personal assistance at more than 4,500 family history centers, all over the world, including one right nearby, in Newburgh.  Callaway also touched upon other methodologies used in genealogical research, such as DNA testing.
The balance of the class was devoted to a thorough introduction to one of the leading subscription software services, Ancestry.com.  Projecting quite a few of the web pages on a screen, Callaway delved into how best to use the site, which recently changed its interface. Topics included starting a family tree.  Callaway advised the group that “you can get a lot of information right away, but not all of it is right.  You need to discipline yourself.”  As an example, she described how “my mother’s maiden name was Howard.  I went back and back and back and found out that she was related to Catherine of Howard, one of Henry VIII’s wives.  I got enthralled doing research so much I kept clicking, but some of it didn’t add up – – people had died before they were born!”
Callaway suggested that when creating trees, they should be made “private” (a selectable choice) if you’re not a 100 percent sure, so that you don’t mess up someone else’s research.  “If you make it public, make sure it’s accurate.”  She also suggested using a Research Log, so that you can track the material you uncover carefully, and also ensure that you don’t go back and back over the same material without necessarily recognizing it as a source you have already used.  She gave out a sample log.
Going deeper into the pages of Ancestry.com, Callaway demonstrated the vast universe of archival materials now up online; everything from worldwide census and military records to ship’s registers, parish rolls, and an astonishing range of data already entered by other people researching their family history.  Callaway went over some of the steps used in creating an online tree and how to link that tree with others.  Calling it “fascinating and frustrating – – full of brick walls,” Callaway enthused that “it gives you a feeling of history that is overwhelming.” Class participants were asked about where their ancestors came from, as Callaway was planning on using the time between this session and the next to garner material specific to those countries.  The countries represented were Ireland, Austria, Canada, England, Italy, Germany, Poland and Scotland. Citing another software program, Family Treemaker, as another good one, Callaway advised the group to take out the free 14-day trials available with most, before making a commitment.
Callaway became interested in genealogy after her sister happened to watch an episode of the show “Who Do You Think You Are?” shortly after their parents had passed away.  Her sister suggested that they split sides of their family and start researching.  Now Callaway calls herself obsessive about it and says that it is “shaping my retirement. I go on genealogical conferences, visit blogs”¦[and] am on a lot of mailing lists.”  In fact, she is planning a trip shortly with her husband, traveling to places where their ancestors came from, he in particular wanting to look at the original parish book records in Norfolk, England, stemming from the 1300’s. 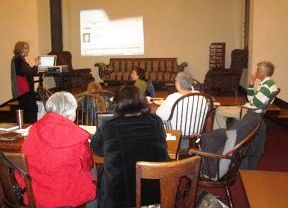 The group learns how to research online

Attending the workshop were Elise LaRocco and her daughter Allie.  Allie became interested after watching “Who Do You Think You Are?” and, having just vague information taken from hand-me-down stories, Allie was most curious about “exploring daddy’s side.”
Leslie and Valerie Robertson were there as well.  They were further along, having actually hired a genealogist to track down family records, including material on an adoptive family. They found out that they had relatives in Australia. As an added bonus to it all they said that “you find other people who are looking for their distant relatives. You never knew they existed; it’s fascinating.”
Although Callaway has turned up such nuggets as the fact that she is distantly related to Bonnie Parker, of ‘Bonnie and Clyde’ fame, the “things that really stick are the histories of people who lived in Harden City, Kentucky; how they lived, how many children they lost.” Callaway plans on using the rest of the sessions to assist participants in their own searches.  She will “look at anyone’s trees and help.” She plans on offering these classes again, as “one reason I’m doing this is to get other people involved so I will have someone to talk to about this!”
The workshops are held at Butterfield Library on Monday nights at 7 p.m.  There will be no meeting on Presidents Day.  For more information, contact Martha Callaway at 845-265-3078 or via email, Martha.callaw[email protected]
Photos by A. Rooney

One thought on “Genealogy Workshops: Search and Discover”