Despite the lack of a dedicated physical house of worship, the congregation of the Philipstown Reform Synagogue (PRS) has held itself together for about ten years now, with, in the words of their rabbi, Michael Rothbaum, a mixture of “chutzpah and spirit.” This is the first synagogue located in Philipstown since the beginnings of the town.

There is a reform temple in Putnam Valley, and conservative congregations in Beacon and Peekskill, but, until 2002, there was no formal congregation right here. The congregation was formed, in the wake of Sept. 11, by Jewish residents of Philipstown who had, by and large and by the description of many, no recent previous affiliation with other area synagogues.  At that time, many of the congregants just happened to have children approaching bar and bat mitzvah age, and felt a desire to give their children a formalized training, and, with that, a sense of cultural identity which had been lacking.

Stephanie Rudolph’s story may be typical. Ten years ago, Rudolph, who has been involved since the inception of PRS, felt that her children were “embarrassed by being Jewish, - not having a cultural peer group to tap into. Rudolph continues, “I didn’t have family around, and started investigating. For me it wasn’t about religion per se, but an investigation of a history, a culture and a spiritual path.  I’m interested in religion as a phenomenon as well, because it has so much power in the world and this is a way in, because I’m Jewish.”

James Thomashower, the current PRS president, describes the beginning in a similar fashion. “Before, maybe because the community was not known for a large Jewish population, most of us had no affiliation.  As our children got older, we wanted to be able to provide Hebrew school and bar and bat mitzvah training for them.  We went looking for a synagogue because we wanted our children to be part of our culture. “At first we held our meetings at St. Philips Church and the Desmond Fish Library, both in Garrison, and now we rent space from St. Mary’s, all of whom have been wonderful. St. Mary’s even stores our Torah in a prominent location in their sanctuary. Before St. Mary’s, the Sisters of the Atonement in Garrison took care of our Torah in their archive room – – we are so grateful to them.Ã” Thomashower mentioned Roberta Shayo as a community member instrumental in starting up the congregation.

Thomashower described PRS as a “welcoming congregation – – our arms are wide open.  We pride ourselves on being open to everyone, including those in mixed marriages.”  At the Saturday service last week, part of which Philipstown.info attended, there were approximately 25 in attendance. Their mailing list numbers about 120 people, although far fewer than that attend on a regular basis. 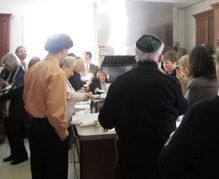 Congregation members gather in the St. Mary's kitchen after the service to break bread

In its early years, the all-volunteer congregation, which had no assigned rabbi, frequently had services led by Rabbi Polish and Cantor Hirschenfang of Congregation Shir Chadash in LaGrangeville.  More recently, prior to the arrival of Rabbi Rothbaum, Canter Shoshana Lash has led the group, conducting all of the High Holiday services for the past four or five years. Noting “how supportive” these leaders had been, Thomashower said that by their leadership they had “prompted a need in us for our own rabbi. We had wanted a designated rabbi for a long time.  Someone well-trained in the Torah – – that’s what it’s all about-  it’s what Jews live by.Ã

It was Beshert (Meant to be)

Enter “Rabbi Mike, as Rabbi Rothbaum calls himself, who came to the congregation via a most non-mystical, contemporary method: email. “I got an email from the placement department at the Academy of the Jewish Religion asking for someone to fill in on some Saturday mornings.  I worked for Hillel of Westchester, serving Sarah Lawrence College and Purchase College for their Friday night services.  Something about this said “respond to me”. I hadn’t been here, but Cold Spring had a great reputation and I thought “I’ll try it.”  I put together a study sheet, came here and I loved it immediately -here there is Kavod HaRav, honor for the rabbi.  At bigger temples, sometimes the lay leadership is so strong they tell you what to do.  I walked in here and they said “you are the expert, you are the teacher.”  Now I feel that it was beshert [ meant to be.]

Having attended a “multi-denominational, pluralistic, Jewish seminary – -the idea there is that there is too much division already – – why would we split ourselves up?” Rabbi Mike didn’t walk into the congregation sure that he would be immediately accepted as their leader.“I offer prayers for Israel and Palestine. I made it clear that I am a Zionist, but I have a vision of a safe and secure Israel next to a safe and secure Palestinian state. The congregation was okay with that. ” The first time I walked in, I didn’t hold back. ” We did the first services and I told them that I was available and asked them if they wanted me back.  They did. There is a word, tzedek.  It means justice.  Our tradition gives us a vision of justice not just for Jews but for the whole world, which means for people who are not Jews but care about the world.  I’m gay.  I have a black partner -how will they feel? Now, if Anthony [Rabbi Mike’s partner, Anthony Russell, an opera singer, and yes, he is Jewish], isn’t here, everybody asks “Where’s Anthony?  Nobody batted an eye.”

“My wish is to work with these amazing people to create a conscious community of learning and holiness and righteous action.  To find like-minded people who are more interested in the spirit inside the building than what the building looks like.”  As for the building that does currently house them, Rabbi Mike is full of praise, “Father Shane [pastor of St. Mary’s] is a miracle.  They built a little space in their own chapel for the Torah.  To be hosted by St. Mary’s is a special blessing.”

Rabbi Mike grew up in a “mostly secular” Jewish home and his family has been “surprised, but proud of the path he has taken.Ã  He was “always drawn to text studying” and “had a real engagement in the Torah and in rabbinical texts from my teenage years onwards.”  His interest in social justice was apparent early on, as he started an Amnesty International chapter in his high school and went on to study public policy in college.  He came to his avocation afterwards. “By accident, almost, I started studying the Torah, and I found that so many of the things I believed in – – providing sustenance for the poor, seeking peace before making war – – all had roots in the Torah.  It felt sort of like going around the world searching for buried treasure and then finding it in your backyard.  I get “people on a journey” because this wasn’t in my upbringing.  I get the “I don’t get it” aspect of it all.  I’m sympathetic to it because that’s been my journey.  You let people know that there is something rewarding in having a spiritual practice and then it will come.” 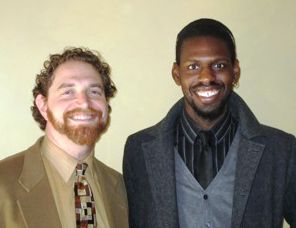 The inclusiveness of PRS was conveyed during the closing moments of last Saturday’s service. During the Kaddish Yatom (the Mourner’s Kaddish) naming those who have recently passed, and the anniversaries of those who have passed, in addition to those named personally by members of the congregation, Rabbi Mike mentioned each Arizona shooting victim by name, as well as “the U.S. soldiers who died in the past week in Iraq and Afghanistan,” again using individual names, and concluding with “we also remember the approximately 112 Iraqis and Afghans who died this week.”

Rabbi Mike, with affection, categorizes this congregation as “DIY ” this is the DIY Jewish congregation.  Jews in the Torah are a wilderness people – – we’re here making holiness in the Parish House instead of on a mountaintop!” He considers, on a constant basis, what draws this congregation together: “Every time I’m here, I ask myself: in a world without shtetls, you can assimilate so easily.  I feel honored that they feel like it’s worthwhile to cast their lot with the Jewish people.”

Philipstown Reform Synagogue hosts services twice a month, at St. Mary’s Parish House, at the corner of Chestnut and Main Streets in Cold Spring.  The next service will take place on March 26. The morning usually begins with a Torah study and discussion, at 9:30 a.m., followed by services at 10:30 a.m. with Kiddush at the conclusion. Food and money are collected at all PRS gatherings to support the Philipstown Food Pantry. For more information on the Philipstown Reform Synagogue, visit their website, http://www.philipstownreformsynagogue.org/ or phone 845-265-8011.

On Friday, March 4 PRS will be participating in Shabbat Across America, a national event.  For reservations or more information, please contact Cathy Duke at 845-265-2711 or by e-mail at [email protected] and leave your name, telephone number and e-mail address, if possible. To cover the costs of the evening there is a charge of $18 per adult. Children ages 12 and under are free. Additional information can be found on their website.

4 thoughts on “Philipstown Reform Synagogue: Judaism with Chutzpah and Spirit”