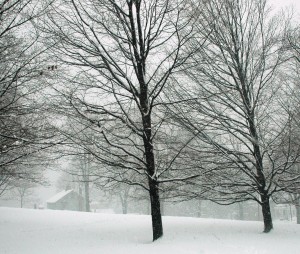 The February 2010 snowstorm, seen 'whiting out' the church lawn at Main and Chestnut streets.

With lingering memories of a February 2010 snowstorm and daily headlines reminding the world of disasters in Japan, Philipstown’s Town Board last week got an overview of a plan for coping with local emergencies. At a workshop meeting March 16, the supervisor and four councilors went over a draft outline of Standard Operating Guidelines for a Local Emergency Coordination Center, or LECC. Acting as a central command post, the LECC would provide staff, information and coordination in both “larger-scale emergencies and non-emergency incidents” that occur in Philipstown, including the villages, but do not trigger intervention by the Putnam County Emergency Operations Center (EOC).
The guidelines cover three types of crisis, from Level 1 — “controlled emergency situation without serious threat to life, health or property,” to Level 3, a “serious emergency situation with major threat to life, health or property involving large portions of Philipstown.” Impetus for a Philipstown LECC came in part from the storm of late February 2010 that left some residents barricaded behind snow mounds and without power for days. After that, “I think we all realized we need to come up with some kind of disaster plan in the event we were cut off from the county,” Town Board member John Van Tassel stated in introducing the draft plan.  “That storm, I think, had the potential to be a Level 3. There were people without power for four to five days. That could have become a serious life threat, but it didn’t, thank God.” Had an LECC existed in December 2009, he added, it likewise could have been activated when a Christmas Eve fire destroyed a huge house close to the Town Hall and a neighboring home, an emergency that shut streets and drew fire and emergency service crews from several jurisdictions.
Overseen by the governments of Philipstown, Cold Spring, and Nelsonville, the LECC would operate from “Dahlia House,” the small green home behind the Town Hall at Main and Cedar Streets in Cold Spring. Yet it would be portable enough to cram its guts — such core components as maps and a computer zip drive – into a large plastic chest to accompany the town supervisor or other designated official. While intended to help the town deal with emergencies, the LECC also could be utilized for such non-emergency situations as parades that require street closings in multiple areas and for drills and training.
Largely drafted by Cold Spring Trustee J. Ralph Falloon, with input from Van Tassel, both veteran firefighters, the guidelines call for maintaining LECC readiness “24 hours a day, 7 days a week, 365 days a year.” The guidelines also specify attention to such details as “mapping of all roads within Philipstown,” whether state, county, town, village, or private, and keeping accurate data on “any special hazard occupancies and facilities” with a view toward “potential service requirements during emergencies.”
The LECC could be mobilized at the request of one of 10 individuals: the Philipstown supervisor, any of the other four Town Board members/councilors, the Philipstown clerk, Philipstown highway supervisor, mayor of Cold Spring, mayor of Nelsonville, or Putnam County Bureau of Emergency Services authority. Upon LECC activation of the LECC, a manager would be assigned to oversee the situation. Falloon said a key element of the LECC is simplicity. “We designed this as a very, very fluid center. It can operate at a very basic level. We decided we’re going to take our show on the road in a simple Tupperware box, because that’s the only way it’ll work.”  Van Tassel emphasized that “this is not going to replace what the county does — by no means; we do not have the resources.” Furthermore, if an emergency “gets out of our realm of control, it would go to the county” for a more comprehensive response.
Falloon recalled that during the 2010 snowstorm and power outage, “on the other side of the county they got hit with one-third of what we did. They had no idea what was going on over here. So there was no reason for them to open up the county EOC to serve a corner or half of Philipstown.” He and Van Tassel explained that the LECC plan remains a draft, subject to further review by the Town Board, the town highway department, and other personnel.  But the LECC could be employed at any time, Falloon added. “This thing is ready now. If there’s an incident from here on, we can function.”
He also pointed out that the town is required to have an emergency action plan and that the LECC would fit with that and with interest in the NY Alert program, which allows local governments to notify participating residents in cases of emergency or important development — such as an urgent water system repair. “All this stuff can flow together” into one effort, Falloon said. “The timing is right — the last storm, what’s going on in the world — for this conversation.”
“People are worried,” Van Tassel concurred.
“It’s also an opportunity to start educating people about what they should have on board at their own house,” Supervisor Richard Shea proposed.
Town Board member Nancy Montgomery suggested the town might also clarify its relationship with the Red Cross vis-í -vis establishment of emergency shelters and with Putnam County on ways to cope with an emergency at the Indian Point nuclear power plant. “I think that needs to be re-examined at our level. I think we need to do something as a board to address it,” she said.
Photo by L. S. Armstrong